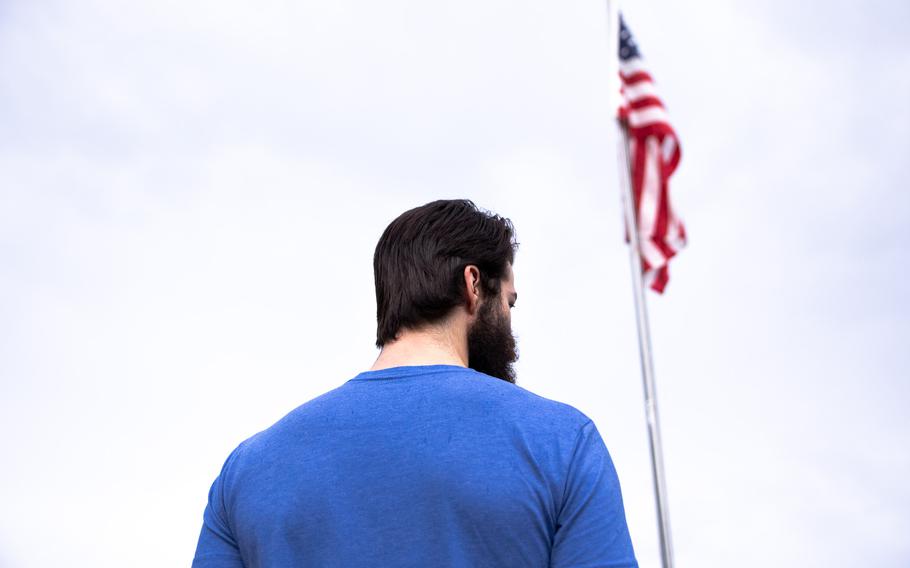 Dakota, a U.S. Marine Corps veteran who fought in Ukraine before suffering a head injury, is now back home in Ohio. (Megan Jelinger/The Washington Post)

To Dakota’s surprise, it wasn’t the shelling that terrified him most.

A Marine Corps veteran who volunteered to fight in Ukraine, he has taken cover behind walls as Russian gunfire punched through and felt the throttle of artillery so many times that his catchphrase, “It’s normal,” became a joke within the unit.

What wasn’t normal, he said, was the feeling of dread while he hid and listened as Russian attack helicopters strafed the position his team of tank hunters had just fled. That moment, he said, “was quite honestly the most unsettled I had been the entire time.”

Dakota, who is home in Ohio now after seven weeks of fighting abroad, is among the legion of Western volunteers who have taken up arms against Russia. Like others, he spoke on the condition that his full name not be disclosed, citing concerns for his safety and that of family and friends.

In interviews with The Washington Post, foreign fighters from the United States and elsewhere described glaring disparities between what they expected the war to be like and what they experienced. They recalled going into battle underequipped and outgunned, the occasional thrill of blowing up Russian vehicles, and feeling torn over whether to go back to Ukraine. Some intend to do so. Others saw friends die and decided enough is enough.

For several, an inflection point came in late April when 22-year-old Willy Joseph Cancel, another Marine Corps veteran, was killed in combat northwest of Mykolaiv, a region that has seen ferocious violence as Russian commanders have sought to widen territorial gains. The full circumstances surrounding Cancel’s death remain a mystery, and his body has not been recovered. Attempts to speak with Cancel’s family were unsuccessful.

There are no known U.S. military personnel in Ukraine, and the Biden administration has sought to discourage American citizens from independently joining the fight, though it is not against the law to do so. Officials have said that the battlefield is complex and dangerous, and that Americans wishing to help the Ukrainian cause should look to do so by other means. And while the exact number of Americans volunteering is unknown, an estimated 4,000 expressed interest after the invasion in late February. Many entered the fight after Ukrainian President Volodymyr Zelensky personally appealed to foreign volunteers to journey there and fight.

Military veterans, in particular, have been drawn to the war, emboldened by their combat training and an eagerness to apply their skills in a conflict that, for many, feels like a struggle of good versus evil.

But the conflict also has drawn Western military veterans who either have never deployed into combat previously or have experienced only asymmetrical insurgencies — not this type of war, with contested airspace, unrelenting rocket bombardment, and swarms of drones with sophisticated thermal targeting technology.

Dane Miller, a U.S. Army veteran, went to Poland to take on a quieter but significant role — helping to run logistics for refugee aid centers and sending crucial supplies over the border into Ukraine. He has also assisted volunteer networks in reviewing prospective foreign fighters’ military records, to assess whether they “have the chops . . . to take on a massive military,” he said. While many do, a common theme is that swagger sometimes stands in place of relevant experience, he noted. He has advised some veterans against going into Ukraine.

“There’s this idea of heroism and it’s glorified. I will look at your 214 and tell you if you’re ready for this,” he said, referring to the U.S. military’s discharge paperwork, DD Form 214, that lists the training and certifications completed while in uniform.

In the Marines, Dakota spent four years as an antitank missile gunner, according to his service record provided by the Marine Corps. He never saw combat but did spend time in Afghanistan as a contractor, he said.

He put his first semester of college on hold so he could fight the Russians, saying a “righteous indignation” compelled him to go for it. He arrived in Ukraine within days of the invasion. Commanders were eager, he said, to tap his knowledge of U.S.-manufactured Javelin anti-armor weapons, thousands of which have been transferred to the Ukrainian army.

Dakota’s cohort of foreign volunteers was attached to a Ukrainian military unit and brought by yellow school bus to Kyiv, from which they were sent northwest into an embattled town outside the capital. It was early March. They were issued antitank weapons and Javelin missiles but no batteries for the launch unit, he said. Without a power source, the equipment was inoperable.

Homes were on fire, Dakota recalled. His unit gathered for a patrol through the woods. A commander motioned with his hand: “Everything that way is Russian.” Artillery blanketed the area. The Ukrainians and their volunteers dispersed. Some went into trench lines, other went into homes. One abandoned residence still had a Christmas tree set up, he recalled. Some Russian troops fell back as the fighting intensified, and they left behind a wounded comrade who wailed into the night, Dakota said.

By the end of the second night, eight of the 20 volunteers in Dakota’s unit had abandoned their posts, he said, including a fellow Marine veteran who appeared to break his machine gun with a rock in the hope of passing it off as battle damage. Another feigned an injury, he said.

Dakota fought throughout the Kyiv region and later was dispatched to the south to help train others on using the Javelin. On one mission, he said, he was unable get a lock on a Russian tank with a cold thermal signature. Then, four men climbed onto the hull to sit and smoke. The sight locked on their body heat. His missile pulverized the vehicle, a strike captured on video.

Russian artillery pounded their position a half-hour later, and Dakota’s team withdrew under the cover of night. About a week later he felt nauseated and carsick. He was diagnosed with a brain injury linked to his proximity to the shelling, he said, and left for home toward the end of April. He has been in recovery ever since.

Other volunteers described different frustrations. Pascal, a veteran of the German army, was on a team with Cancel, the American killed in combat in late April. Problems arose during their first mission, he said.

The team suspected their two-way radios were being monitored by Russian forces, and they lacked extra batteries, forcing them to rely on unsecured cellphones and WhatsApp to communicate. Soon after they exchanged plans, their position was attacked by Russian artillery, he said.

The volunteers felt underinformed during many of their missions, not knowing where they were — and, vitally, where the Russians were, Pascal said. The day Cancel was killed, he said, they took fire from a position they believed to be Ukrainian but didn’t have radio communication to confirm. Two members of the team ventured out to investigate. Gunfire sounded and they never returned, he said.

The remaining team members came under heavy fire, including artillery rounds, from the same direction, Pascal said. One team member was killed in the shelling. Pascal and another volunteer turned their attention to Cancel, who had be struck by shrapnel, he said. They applied tourniquets in a fruitless attempt to stop the bleeding. Their bodies were left behind as Pascal and another survivor withdrew.

That was Pascal’s last mission. He later crossed into Poland. Miller, the American volunteer, met him at a bar in Warsaw and noted how shaken up he seemed. They stepped outside and Miller consoled him, using Google Translate to find the right words in German. They hugged.

“From the beginning, we had no chance,” Pascal said in an interview. “I was asking myself why I survived and the others did not.”

A Ukrainian-born man who is a naturalized U.S. citizen spoke with The Post on the condition he be identified only by his radio call sign: Texas. He recalled how, early in the war, he saw images of his hometown on fire and left to join the fight two days later.

Texas, who earlier this month returned to his home in Houston, never served in the military. He works in an office. But he’s a quick study, he said, and soon was imparting lessons learned from his American colleagues to the Ukrainians whom he fought alongside — things like tactical theories for conducting ambushes, and staying out of sight from Russia’s surveillance drones and vehicle-mounted optics.

Texas patrolled in hunter-killer teams in southern Ukraine, he said, including one mission where he spotted a T-72 tank dug into a berm near Mykolaiv, its turret barely visible from more than two kilometers away. Texas fired a missile and it sliced through the tank just next to the turret. A success — but the rest of the team let out a groan. They wanted to see a column of fire propel the tank’s turret high into the air.

“It didn’t explode the way we wish it would,” said Texas, whose lessons were documented in an April report by the Wall Street Journal. “We were kind of bummed about that.”

Life at home lacks the sense of purpose and excitement, Texas said. He’s mired in divorce proceedings, initiated before he left for Ukraine, and occasionally hears from friends who update him over text about their successful tank harvests.

In quiet moments, he reflects on what he has taken from the experience, good and bad. He’s more relaxed at work and doesn’t stress about small inconveniences the way he used to. But something is missing, he said, and he is tempted every day to get it back.

“Once you see that life-and-death contrast, and you come back to a peaceful life and a peaceful job,” he said, “everything seems to be less meaningful by comparison.”