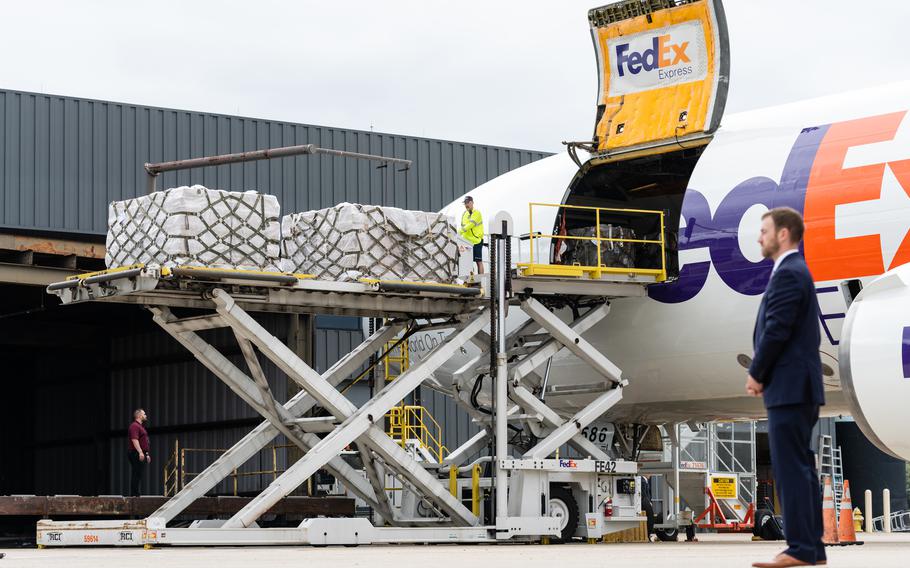 In an all-hands-on-deck multiagency push, infant formula is being corralled from all parts of the globe as part of Operation Fly Formula.

On Friday afternoon, the Food and Drug Administration announced Australian company Bubs will send 27.5 million eight-ounce bottles of a variety of infant formulas, from "easy-digest" goat's milk to organic grass-fed cow's milk and specialty formulas like Bubs Supreme A2 beta-casein protein. Some of this product is in stock and ready for transport, while some will be produced in the coming weeks and months.

The imports come as Washington scrambles to respond a shortage of baby formula that has left shelves bare and parents struggling to find food for infants and children with special dietary needs. The FDA has been sharply criticized for failing to head off the shortage.

"Steps like the one the agency is taking today means more infant formula will be available to parents and caregivers in the weeks and months ahead. We will not rest until our shelves are replete with safe and nutritious infant formula," FDA Commissioner Robert Califf said.

At the same time, Health and Human Services Secretary Xavier Becerra invoked the Defense Production Act for a third time in less than a week, this time to ensure agribusiness giant Cargill, the United States' largest privately held company, will prioritize delivering raw materials to infant formula manufacturers over other food companies.

Operation Fly Formula's principal logistic control comes out of HHS, with daily communication with the White House, FDA, Agriculture Department, Defense Department and other agencies. According to HHS officials, the first priority is to identify specialty formulas for infants and others with rare metabolic disorders, product that will primarily be distributed, once stateside, through medical channels like children's hospitals and pediatricians' offices. The agency is prioritizing products from English-speaking countries to minimize how much relabeling and repackaging must be done.

Already, the Biden administration has completed two flights, with the first bringing 132 pallets of Nestlé's Alfamino formulas from Europe to Indianapolis. The second sent 114 pallets of Gerber products into Washington Dulles International Airport. Together, they represented the equivalent of approximately 1.5 million eight-ounce bottles of formula.

HHS senior officials say that they don't yet know how many flights will be scheduled to bring formula from abroad, and that much of it depends upon measurable need, out-of-stock levels in stores and flexibilities the FDA is giving producers. The federal government's role in the operation is to speed up getting the formula into the country, but it is not designed to take over the entire distribution channels. Formula will be distributed via already existing channels (retail stores, medical providers and as part of the benefits associated with the food assistance program called WIC), but officials said that efforts will be made to ensure all U.S. states and territories are given equal access.

Biden invoked the Defense Production Act first on May 18 to address the nationwide baby formula shortage caused by a recall and closure of the country's largest formula manufacturing plant, by speeding up production of domestic infant formula and loosening restrictions that prevented most foreign brands of formula from being sold domestically.

Becerra followed up on Sunday, invoking DPA to authorize manufacturers Abbott Nutrition and Mead Johnson to more easily get their hands on raw materials they need to accelerate production of formula. This third invocation aims more squarely at guiding Cargill — which makes corn byproducts, sweeteners and oils essential for formula — to rate its formula clients above others.

"The two DPA priority ratings we issued previously are already making a positive impact on overall production, which is why we will continue to leverage DPA when we believe it will help mitigate the current shortage," said Dawn O'Connell, HHS assistant secretary for preparedness and response.

The efforts don't appear to have had measurable effects on formula stocks in grocery stores — in part because most of the fresh formula is being sent to pediatricians and hospitals. According to data research firm IRI, the latest inventory figure for the week ending May 15, the most recent week for which there is data, store shelves across the nation were 78.52% full, down from 79.15% the week prior. In states such as Kansas, Arkansas and Minnesota, stores' stocking levels hover 10% lower than that.