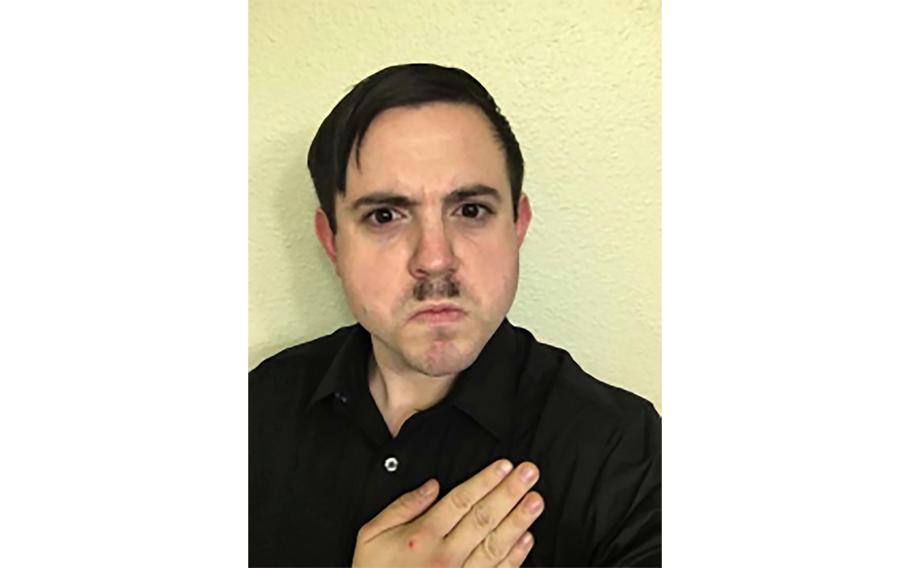 WASHINGTON — A New Jersey man who claimed he didn't know that Congress met in the U.S. Capitol and so couldn't have intended to disrupt the electoral vote certification on Jan. 6, 2021, was convicted Friday by a federal jury in Washington of felony obstruction of an official proceeding and four other misdemeanors.

After the jury announced its verdict, U.S. District Judge Trevor N. McFadden said he would consider an "obstruction of justice" extension of Timothy Hale-Cusanelli's sentence because of his testimony, in which he also said he didn't know he was interfering with a police arrest on Jan. 6.

"I find these claims highly dubious," the judge said.

Hale-Cusanelli, 32, of Colts Neck, N.J., worked as a security guard and lived on Naval Weapons Station Earle there. In addition to being a supporter of President Donald Trump, he was an open white supremacist who supported Nazi ideology and admired Adolf Hitler, even wearing a "Hitler mustache" to work, the government said in court filings. In a video obtained by prosecutors, the former Army soldier and then-Army reservist asked in 2020, "I'm not saying Hitler did nothing wrong, but did he do anything wrong?"

The trial focused on Hale-Cusanelli's actions on Jan. 6 and his comments afterward to a roommate and federal investigators. Hale-Cusanelli attended a portion of Trump's "Stop the Steal" rally at the Ellipsis, then walked to the Capitol and was among the first rioters to enter the Capitol that afternoon. Surveillance video showed him climbing through a window on the west Lower Terrace at 2:13 p.m., wearing a gray suit and a red MAGA hat. Before entering, prosecutors said, he moved a bicycle rack barrier aside to enable crowds to get closer to the building, and then urged the mob forward by waving his arms and yelling: "Advance! Advance!"

Once inside, photos and videos showed, Hale-Cusanelli was part of a group that overwhelmed Capitol and D.C. police in the crypt, and then attempted to pull a rioter away from police as they were arresting the other rioter. On the witness stand, Hale-Cusanelli repeatedly apologized for all of his actions.

Hale-Cusanelli said he knew the electoral vote certification was happening on Jan. 6, but "I thought it was going to be in a building called 'Congress.' As stupid as it sounds, I did not realize that Congress sat in the Capitol building. . . . I didn't know the Capitol building was the same as the congressional building." Hale-Cusanelli said he previously attended the Trump inauguration in 2017 and had attended a post-election protest in Washington in December 2020.

Hale-Cusanelli was trying to show that he did not have the intent to disrupt the electoral college process and thus couldn't be guilty of obstructing the proceeding, for which he faces a years-long prison sentence. He and his attorney, Jonathan Crisp, mostly did not challenge the four misdemeanor counts: entering a restricted building, disorderly conduct in a restricted area, disorderly conduct in a Capitol building, and parading or demonstrating in a Capitol building. The misdemeanors each have a maximum one-year term.

Hale-Cusanelli took videos before and during his trip through the Capitol, which lasted 40 minutes, including yelling vile comments at police outside the building. His text messages before and after Jan. 6, declaring that Joe Biden had not been legally elected, used the n-word. He said on the stand Thursday that he still felt the election needed to be investigated.

Crisp told the jury at the outset that they would hear "how bombastic he can be, how antagonistic he can be. He is that guy who just wants to say things to agitate." And, Crisp said, "he was wrongfully in the Capitol. He said a lot of offensive words. And he shouldn't have been there at the end of the day. The question of why he was there, that's important. You are the gatekeepers of whether the government is overreaching."

Hale-Cusanelli testified that he thought Trump would be speaking at the Capitol, after hearing the president say he would be marching with the protesters, and that he merely followed the crowd into the building. "I was wrong, I shouldn't have been there," he told the jury. He said he didn't learn that Vice President Mike Pence and members of Congress were in the same building until a police officer told him.

Upon his return to the naval base in New Jersey, Hale-Cusanelli described his trip to a roommate. The roommate contacted the Naval Criminal Investigative Service, which provided him with a hidden microphone to record a second conversation with Hale-Cusanelli.

On cross-examination, Karen P. Seifert, an assistant U.S. attorney, pointed out the text messages Hale-Cusanelli sent after the 2020 election, detailing his analysis of elector slates, the recount in Arizona and the process leading up to the electoral vote certification, and noting that he could be heard chanting "Stop the steal" inside the Capitol.

Seifert also noted that Hale-Cusanelli wrote in a February 2020 text that, in reference to liberals, that he wanted "the civil war started already." In a recorded conversation with his roommate after Jan. 6, he again said he wished for a civil war to achieve a "clean slate." Hale-Cusanelli also said, "I don't think we can fix the problems that Jews cause if you don't address all the things they do."

But in both his recorded discussion with his roommate and a five-hour interview with the NCIS and FBI, Hale-Cusanelli did not say he went to the Capitol without knowing it was where the electoral vote was being certified, Seifert observed. "He would have you believe he did not know they were certifying the vote one floor up," Seifert said. At trial, the prosecutor observed, "This is the first time that he thought, 'This is what I should say.' "

Crisp responded, "There are multiple Capitol buildings where the House and Senate meet. . . . He knew what they were doing, but not where."

Hale-Cusanelli was the fifth Jan. 6 defendant to take his case to a jury and the fourth to challenge the charge of obstruction of an official proceeding. All five jury trials have resulted in guilty verdicts; none of those defendants have been sentenced yet. In two misdemeanor bench trials, both before McFadden, one defendant was convicted and one was acquitted.

About 800 people have been charged in federal court in Jan. 6-related cases, according to Washington Post records, with 300 pleading guilty and six having been convicted at trial. Of those convicted, 179 people have been sentenced, all but 15 for misdemeanors. Of the 15 felony sentences, the average prison term handed down has been about 30.6 months, according to Post records. The three defendants who have been sentenced for obstructing an official proceeding, all after pleading guilty, received terms of eight, 33 and 41 months.

Hale-Cusanelli's sentencing was set for Sept. 16. Because he took his case to trial, he will not be considered for a sentence reduction, and instead McFadden may increase his sentence.