How diesel prices are slamming your wallet in hidden ways 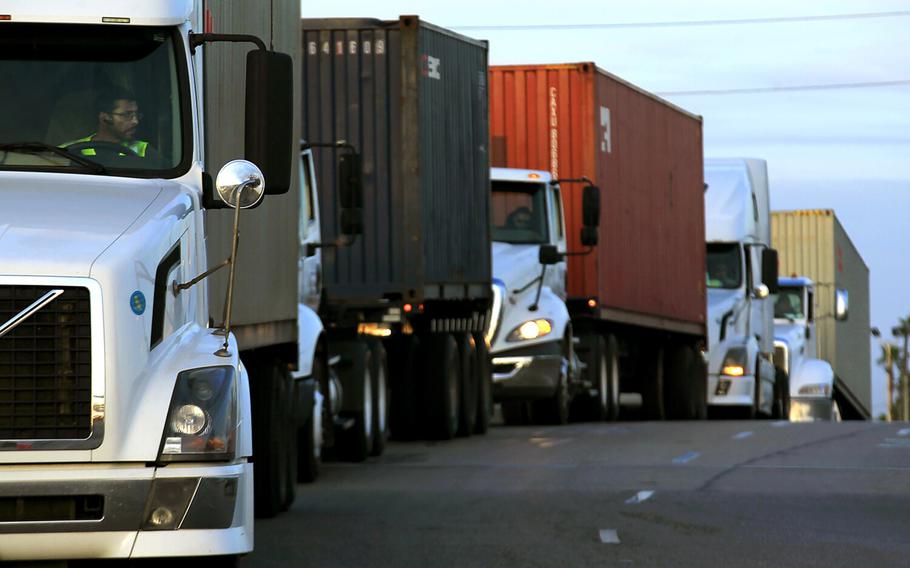 Trucks wait in line to take cargo to a pier in the Port of Long Beach in California on April 8, 2014, (Brian van der Brug/Los Angeles Times/TNS)

LOS ANGELES (Tribune News Service) — If you’re wondering what’s swelling the price of everything you buy, the cost of a gallon of diesel is a good place to start.

Record gasoline and diesel prices across the country are a major contributor to the kind of inflation not seen in 40 years, and it’s worse in California, where both fuels cost more than anywhere else in the country.

For motorists, every visit to the gas pump brings a fresh helping of pain. But consumers also should worry about how diesel, something most people never buy, is quietly denting their wallets.

That’s because diesel runs the world’s economic engine, and the fuel’s price has soared faster and higher than gasoline.

“People should be very concerned. This will ripple through the economy,” said economist Philip K. Verleger Jr., who has analyzed energy markets for more than 50 years.

Gas and diesel have been dragged higher by oil’s steep rise after Russia invaded Ukraine and the U.S. banned Russian petroleum products. Brisk demand for both fuels has added to the jump.

The U.S. diesel price jumped Monday to $5.57 a gallon, up from $3.25 a year earlier, according to the Energy Department’s weekly survey, although big trucking operations have some protection from sudden price surges through contracts with suppliers.

In the U.S., trucks and trains are the biggest diesel users. They move most of the products consumers use as well as raw materials headed to manufacturers, building sites and the like, Verleger said, putting upward pressure on prices all along the supply chain.

Diesel also powers major sectors including agriculture, construction and manufacturing. Even your favorite food truck is probably running on diesel, which is going to make your mobile comfort food cost more.

To understand how diesel prices are hitting consumers, look at trucking operations such as Liberty Linehaul West.

The Montebello company is spending an average of $1,340 per truck, up from $770 a year ago, to fill its 50 big rigs with diesel, President Greg Dubuque said. For trucks on California-only routes, the cost is significantly higher because all fuel — whether diesel for an 18-wheeler or gasoline for a passenger vehicle — costs much more in the Golden State than anywhere else in the U.S.

Because Dubuque is paying so much more for diesel, consumers are likely to pay more for everything the company delivers.

And Liberty Linehaul delivers a lot, with many of its rigs shuttling between enormous warehouses and retailers of all sizes across the U.S. and Canada. In those loads are items as small as jewelry or as big as furniture. Another common delivery is clothing.

What’s more, nearly all of those products arrived at the warehouse from overseas via cargo ship (using diesel during part of the voyage) and diesel-guzzling truck.

“We are trying to manage it as best as we can, but it is tearing into us,” said Dubuque, who also chairs the California Trucking Assn. “As an industry, we’ve never seen anything like this. It’s hard to keep pace as that price goes up, and it’s affected our bottom line by a minimum of 12%.”

The trucking group’s diesel-dependent members transport an even wider array of things than does Liberty Linehaul, Dubuque said, pretty much “any product that needs to get from one point to another.” The list includes food, fuel, medical equipment, processor chips and cars.

Walmart and Target last week cited surprisingly high fuel costs as a factor in quarterly earnings that fell short of Wall Street expectations, and the stocks of both retailers plunged. Executives from the retail giants said unexpectedly higher fuel and other costs are translating into higher prices for shoppers.

“We generally passed on cost increases from suppliers at the category cost of goods level, but fuel costs accelerated during the quarter faster than we were able to pass them through,” McMillon said.

Skyrocketing fuel costs, of course, aren’t the only reason for 1980s-style inflation. Supply-chain problems, brisk consumer demand and rising labor costs all have a hand in the problem, as the National Retail Federation noted in its latest monthly economic report.

Here is a sampling of industries affected by surging diesel prices and how some of those higher costs reach consumers:

The plows that prepare the soil for planting run on diesel. Tillage machines that break up and aerate the soil and machines that fertilize it use diesel. Planting and seeding equipment need diesel. Once the food is grown, along come the harvesters, which operate on — you guessed it — diesel.

“Farmers pay for the diesel, plant, hope that the crops come out, hope the prices are OK,” he said. “Now they might not have enough cash, and the banks may not provide them the cash to buy all the fuel they need. They may plant smaller crops, which all that means is the food prices are going to be even higher.”

Diesel is the workhorse of the construction sector, representing 98% of the industry’s energy consumption, according to the Diesel Technology Forum, a trade group that promotes diesel technology. Uses include heavy-duty equipment such as excavators for digging foundations, graders for moving soil and pile drivers for strengthening foundations.

New home construction is affected too, along with that granny flat or expanded kitchen you’ve been planning.

Those appliances you ordered but are still waiting for? Once they finally arrive, they’ll be delivered by diesel truck.

Diesel is a fundamental fuel of mining and manufacturing, as well as logging, the Diesel Technology Forum said.

More than 60% of U.S. mining and fuel production equipment is diesel-powered, the group said.

Manufacturers use a wide range of diesel-powered equipment to, as the Diesel Technology Forum put it, “create the goods and services Americans use in everyday life.” For example, diesel often fires steam boilers used in chemical plants and textile factories, according to the National Renewable Energy Laboratory.

Many industrial facilities also have diesel generators for backup power supply, a use shared by institutional facilities, hospitals, office buildings and electric utilities, according to the Energy Department.

The industry that moves you, your children and your stuff still depends on diesel despite some inroads by alternative fuels and electric vehicles.

More than 80% of U.S. goods are imported, government data show, which means they probably got here on a ship or truck. Airplanes fly on jet fuel, but air freight operations rely on diesel lifts and vehicles to move planes around, according to the Diesel Techology Forum.

In California, more than 80% of all consumer goods are delivered by diesel trucks, according to the California Trucking Assn. Nationwide, 76% of all commercial vehicles and 98% of all big rigs use diesel, the Diesel Technology forum said.

That means your late-night e-commerce habit and your next mall run could cost you more because diesel costs more.

Moving into a new home or apartment? Expect the truck carrying your belongings to be powered by diesel.

Some of the most precious cargo includes children, and 95% of all school buses are still powered by diesel, according to business analytics firm IHS Markit. You don’t care because you don’t have kids? You’re still paying for public education with your taxes.

Why diesel will stay expensive

California brings its own problems to the table. De Haan said, because diesel production at the state’s refineries is down 26%. California’s strict air-quality regulations dictate cleaner-burning fuels than is produced in most of the U.S., and few refineries outside the state make the unique blends.

In addition, the embargo on Russian oil imports has hit California in a way that hasn’t affected other states as much.

Energy economist Verleger has a long view, taking into account the cyclical nature of energy markets and the economy.

“The diesel thing is it’s quite serious, and I think I know how it’s going to solve itself,” he said. “I think a year from now, we’re going to be looking and saying, ‘How did we get into this bad recession?’ “