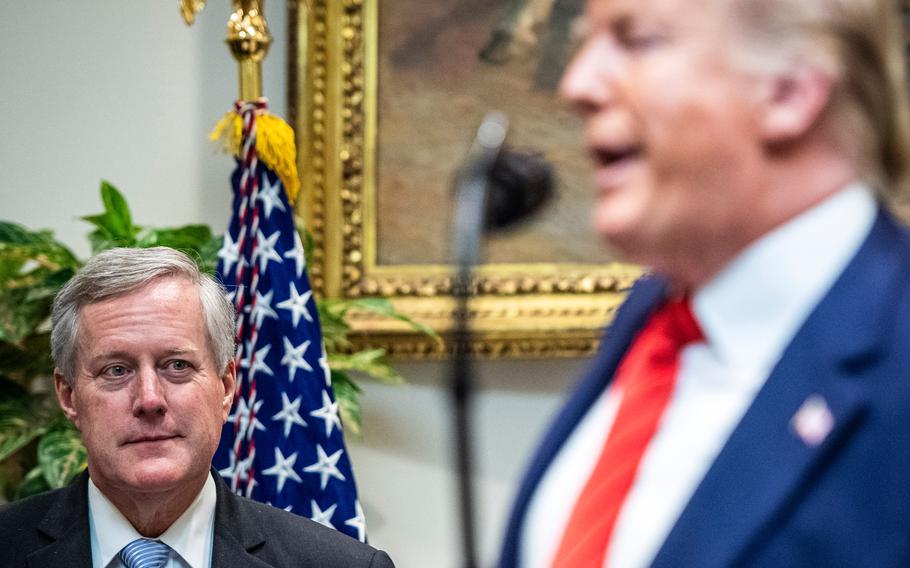 Chief of Staff Mark Meadows was in and out of the White House dining room on the day of the attack. (Jabin Botsford/The Washington Post)

WASHINGTON — The House select committee investigating the Jan. 6, 2021, attack on the Capitol collected testimony that then-White House Chief of Staff Mark Meadows remarked to others that then-President Donald Trump indicated his support for hanging Vice President Mike Pence after rioters who stormed the Capitol on that day started chanting "Hang Mike Pence!"

The account of Meadows's comment characterizing Trump's reaction to his vice president was provided to the committee by at least one witness, according to people familiar with the investigation — but those people did not describe the tone with which the comment was made. They spoke on the condition of anonymity to be more candid about a sensitive topic.

The development was first reported by the New York Times.

The committee declined to comment. In a statement, Trump baselessly claimed the probe was "just an extension of the Democrat smear campaign." A spokesman for Meadows did not respond to a request for comment.

Meadows was in and out of the dining room off the Oval Office on the day of the attack and in Trump's presence as the riot unfolded, according to testimony provided to the committee by former White House staffers who were in the West Wing that day

The Washington Post previously reported that Trump vented to those around him about Pence as he watched on television as rioters besieged the Capitol. At 2:24 p.m., minutes after the vice president and his family were endangered by the pro-Trump mob and forced to flee the Senate chamber, Trump tweeted that Pence lacked "courage."

"Mike Pence didn't have the courage to do what should have been done to protect our Country and our Constitution, giving States a chance to certify a corrected set of facts, not the fraudulent or inaccurate ones which they were asked to previously certify," Trump's tweet said. "USA demands the truth!"

People familiar with the committee's work said they view Hutchinson, a longtime Meadows aide, as a key witness.

Hutchinson was in a number of meetings in the White House and had extensive access to Meadows, one person said. Her lawyer did not respond to a request for comment.

The committee is particularly interested in Meadows's role in Trump's efforts to overturn the 2020 election, this person said, and has put together a detailed account of his behavior during that period. Some witnesses have said Meadows used his fireplace to burn documents, the person close to the committee said.