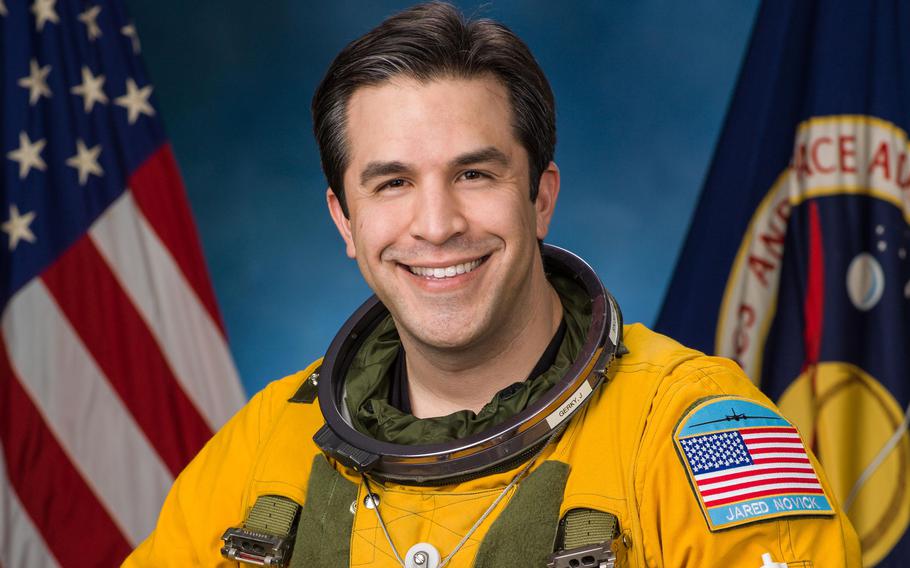 Jared Novick, the former CEO of the cyber company BitVoyant, is seen in a NASA suit in 2015. Novick testified Tuesday, May 24, 2022, that he was “extremely uncomfortable” when he was tasked in 2016 to do a data search on associates of then-presidential candidate Donald Trump. (Twitter)

WASHINGTON - A former technology company executive testified Tuesday that he felt "extremely uncomfortable" being asked in 2016 to use his commercial data firm to search for information about associates of then-presidential candidate Donald Trump.

Jared Novick at the time was chief executive of a firm founded by another tech executive, Rodney Joffe. He offered one of the more colorful bits of testimony - and one of the last pieces of prosecution evidence - in the trial of Michael Sussmann, a well-connected lawyer being prosecuted by special counsel John Durham for allegedly lying to the FBI when he made allegations about possible Trump-Russia connections.

Less than two months before the 2016 election, Sussmann gave the FBI data and analysis that argued a Trump Organization computer was in secret contact with a server for Russia-based Alfa Bank. Sussmann is charged with lying when he claimed he wasn't bringing the information on behalf of any client; in fact, prosecutors allege, he was acting on behalf of Joffe and Hillary Clinton's presidential campaign.

Prosecutors are trying to convince the jury that Sussmann lied to obscure an underhanded effort by Clinton partisans to dig up damaging information about candidate Trump, share that information with reporters and get the FBI to launch an investigation. Sussmann has denied the allegations, and his lawyers say the prosecution argument of a sprawling conspiracy are unfounded.

On Tuesday, Novick testified that Joffe tasked him in August 2016 with searching for data on people associated with Trump - including Carter Page, a former Trump campaign adviser who was investigated by the FBI as a suspected agent of the Russian government; and Richard Burt, a former U.S. ambassador who reportedly advised the campaign on foreign policy matters.

Novick said he was also asked to look at computer addresses with the word "Alfa" in it.

Page was the target of a Foreign Intelligence Surveillance Act court-approved surveillance in 2016 and 2017. A review of that case found the FBI made serious omissions and errors in the applications presented to the court. Page was not charged with a crime.

Novick testified the search terms he was given by Joffe were "associates of Donald Trump and Russian entities." He said he was "extremely uncomfortable" by what seemed to be the political motivations of the request, particularly since his company examines broad swaths of data for corporate security, not individuals' data.

He compared the request to having a commercial satellite used for flood analysis suddenly being repurposed to study someone's backyard at a specific address.

"Given the political nature of the work and the individuals, I knew I could only trust certain people at the company," said Novick, who decided to give the project a code name so that only a few employees would know about it.

"We called it Crimson Rhino because the last thing I wanted in our office was Donald Trump's name," he testified.

Sussmann's lawyer, Sean Berkowitz, pressed Novick to admit that he did not like or get along with Joffe, suggesting that was his motive to now testify in the case.

"I had a challenging time with Rodney, correct," Novick said.

Sussmann's trial is the first courtroom test of the investigative work done over the last three years by Durham, who was appointed by Trump administration attorney general William Barr to probe whether the federal agents who investigated the 2016 Trump campaign committed wrongdoing. The case has served as a kind of Rorschach test for those still smarting over the 2016 election and eager to see political opponents suffer legal consequences for what happened.

Prosecutors said they will present only one more witness before finishing their case - a person who can summarize exhibits and testimony and is expected on the stand Wednesday.

After that, Sussmann's defense team is expected to call a number of witnesses, including former New York Times reporter Eric Lichtblau, an FBI agent and character witnesses. Closing arguments could come as early as Friday.

Lichtblau's potential testimony is complicated by his assertion that as a journalist, he should not be forced to testify about issues beyond his conversations with Sussmann and Joffe. U.S. District Court Judge Christopher Cooper said he intends to hear arguments about that issue before any potential testimony.