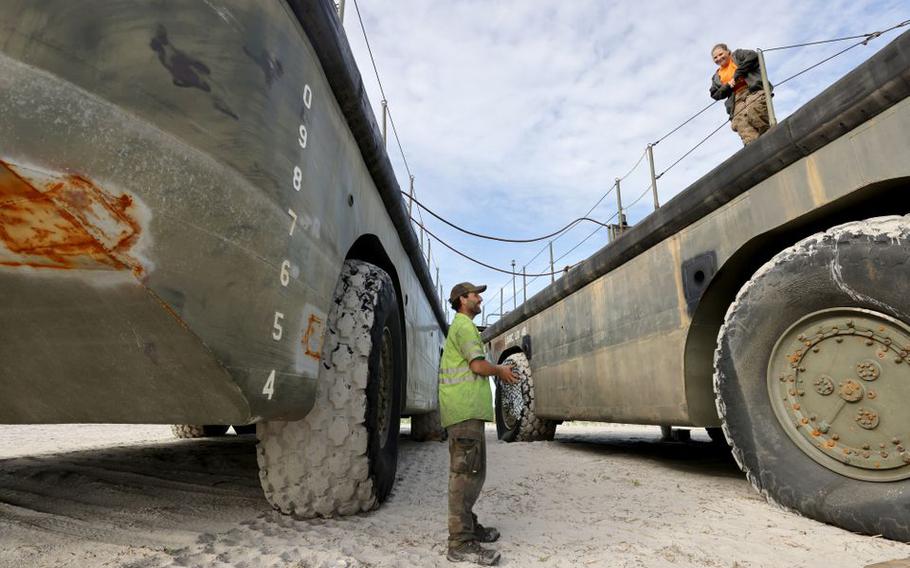 Leland Brummett talks to his sister Vashti as she stands on a Vietnam-era amphibious vehicle on Cove beach in Brigantine, Tuesday, May 24, 2022. They pulled into the Absecon Inlet after one of the two vehicles experienced steering problems. (Tim Hawk, nj.com/TNS)

The “Wild Sally” and “Big Jack” motored into the Absecon Inlet and drove onto the beach after “Wild Sally” suffered steering issues.

“We realized that one of the old steel hydraulic lines had ruptured,” John Hennage told NJ Advance Media while in Virginia picking up the parts needed to get Sally operating again.

He was one of five crew members helping motor the two vehicles to Aberdeen, Md., for a company his sister is starting. The vehicles will then head to Tappahannock, Va.

Such an amphibious vehicle is called a LARC, for lighter amphibious resupply cargo, or sometimes LARC-LX, and were used in the military.

It hasn’t been an easy ride for the crew who left Staten Island May 16 for what was supposed to be an approximately 36-hour trip.

They pulled up on Island Beach State Park when they encountered a clogged fuel line. They did enough work to get up and running before making a stop in Barnegat Light to finish up.

“From Barnegat Lighthouse down to Atlantic City was really a nice pleasurable trip,” Hennage said.

Brigantine might have been another unscheduled stop for the crew, but for curious people walking on the beach Tuesday afternoon, it was a chance to see the massive vehicles up close prompting one person to ask jokingly, “Are we being invaded?”

With the Memorial Day weekend fast approaching, Hennage said the plan is to be out of Brigantine before the crowds arrive. The next scheduled stop is in Cape May for fuel.

“Our plan is to be off the beach before anybody is trying to get on the beach for the holiday week,” said Hennage.

Brigantine City Manager Jim Bennett said that he spoke to Hennage and he assured him they would be gone by first light Friday morning at the latest.

“They ran into a maritime emergency and we’re happy that they’re safe,” Bennett said, who did training on an LARC when he was in the Army between 1986 and 1991.

“They’re the largest amphibious vehicle the U.S. military has ever built,” said Bennett. 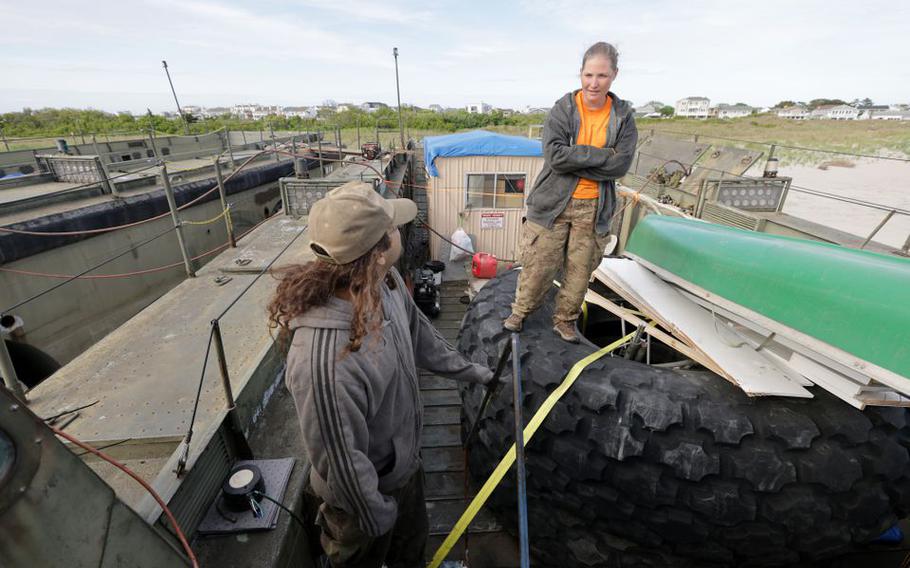 Hennage said that his sister bought three of the LARC LX’s a few years ago from a Staten Island company, which purchased eight of them after they were decommissioned by the Army sometime in the early 2000s.

One was not worth salvaging and was stripped for parts. Out of the eight, these are the last two and were used in Vietnam. The LARC LX was used to offload supplies and personnel.

Once in Virginia they will be used for marine construction including beach reclamation, beach stabilization and seeding oyster beds along the Chesapeake Bay.

Using these vehicles will make it easier to bring large equipment and trucks directly to the beach without having to go through someone’s yard or tearing up the town’s small road infrastructure, said Hennage.

Hennage said that through his research, he could only find approximately 10 left in the world and only five or six of those are partially operational.

“They’re unusual,” said Hennage. “I mean, there aren’t very many of them left. People will never see another one.”

According to Leland Brummett, one of the crew members who was working on “Wild Sally,” the LARC LX can travel 20 mph on land and 6 knots in the water.

“So we would have been home if we could have just driven it down the road,” he said with a laugh.