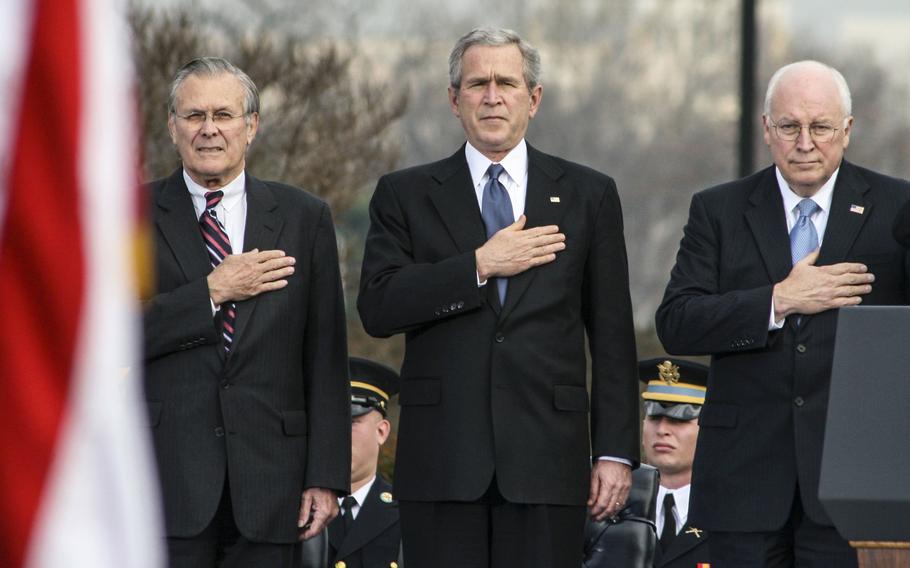 Secretary of Defense Donald Rumsfeld, President George W. Bush and Vice President Dick Cheney stand for the playing of the national anthem during Rumsfeld's retirement ceremony at the Pentagon in 2006. (Joe Gromelski/Stars and Stripes)

(Tribune News Service) — An Iraqi man living in the U.S. accused of being an Islamic State operative plotted to smuggle assassins into the country to kill former President George W. Bush, according to a news release from the U.S. Department of Justice.

Shihab Ahmed Shihab Shihab, a 51-year-old Iraqi national living in Columbus, Ohio, has been charged with an immigration crime and aiding and abetting a plot to kill Bush, according to the Justice Department. He is accused of meeting with others in a hotel room in Columbus to look at sample firearms and law enforcement uniforms in March and traveling to Dallas in February to scout locations associated with Bush in preparation for the would-be assassination attempt.

According to an FBI search warrant application obtained by Forbes, he said he wanted to assassinate Bush because he held the former president responsible for deaths in Iraq and the breaking up of the country after the U.S. military invasion in 2003, Forbes reported.

The Justice Department specified in its news release that the assassination was plotted as retaliation for “Operation Iraqi Freedom.”

The warrant application was filed by the FBI on March 23 and unsealed this week, according to Forbes. The FBI said the plot was uncovered through surveillance of Shihab’s WhatsApp, an encrypted messaging app owned by Facebook and Instagram parent organization Meta, and the work of two confidential informants.

Forbes said the case shows that federal investigators have continued to monitor actions by the Islamic State, also known as ISIS or ISIL, “even as the group has been severely weakened by American intelligence and military operations in recent years.”

Shihab entered the U.S. in September 2020 on a visitor visa and filed a claim for asylum with U.S. citizenship in March 2021, according to the Justice Department. He has lived in Columbus and Indianapolis, where he worked at markets and restaurants.

Shihab is also accused of arranging to smuggle someone he thought to be an Iraqi national into the United States for a fee of $40,000, according to the Justice Department. He accepted tens of thousands of dollars in October and December of 2021 as payment for the smuggling.