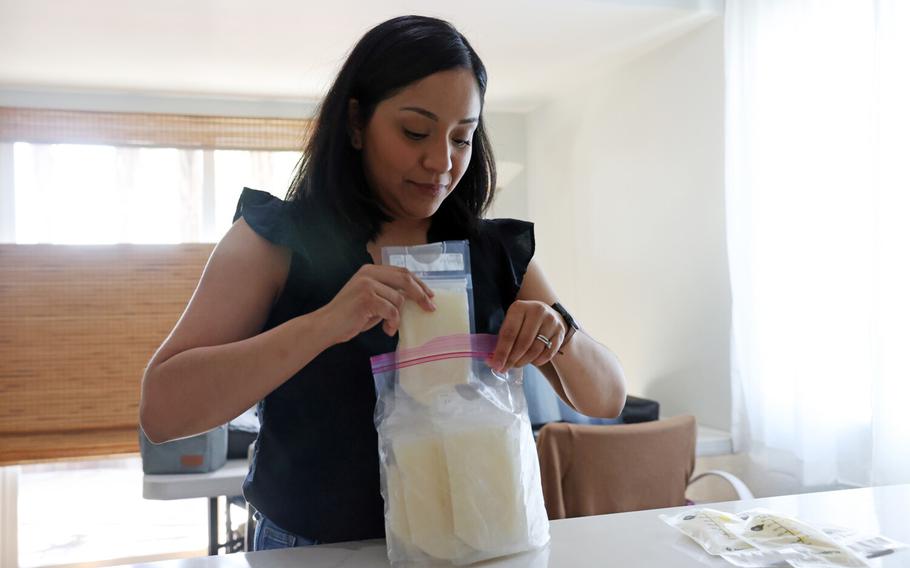 LOS ANGELES (Tribune News Service) — For Diana Granados, 29, the quest began with a callout on a popular Instagram page for new parents.

“Do you have any formula to spare?”

Granados didn’t. But as she thought of the ongoing national formula shortage, and of babies like her 6-month-old son, Raul, going hungry, she wanted to offer what she could.

“Hello, I have breast milk to donate,” the Baldwin Park mom wrote in the comments. Within minutes, requests were flooding in.

“They wanted to give me explanations of why they needed the milk,” Granados said. “I was like, ‘I don’t even need to know that! I just want to give it to you.’”

Granados is one of thousands of lactating parents from across California who have poured in to help with the ongoing emergency. As their neighbors scramble to find formula, some nursing parents are looking to their own bodies as a source of help.

“The number of donors we’re seeing has significantly increased this past week,” said Jonathan Bautista, executive director of the nonprofit Mothers’ Milk Bank of San Jose, the oldest human-milk bank in the country.

The state’s other nonprofit bank, the University of California Health Milk Bank in San Diego, has seen a similar surge.

“We’ve had a fivefold increase in inquiries for donating in just the last six days,” Dr. Lisa Stellwagen, the bank’s executive director and a professor of pediatrics at UCSD, said Tuesday. “It’s been this huge outpouring.”

For millions of families, the formula shortage was already acute back in April. But the crisis exploded into the public consciousness last week, when baby-food aisles in local supermarkets and national chains such as Walmart and Target were stripped almost bare. In a Mid-City Target store on Wednesday, rainbow rows of fruit puree and veggie mush sat facing empty shelves, with little more than gallon jugs of sterile water and flats of Pedialyte where formula would normally be.

The response from fellow parents was swift. Groups on Facebook, Instagram and WhatsApp mobilized to connect neighbors who had formula with those in need. Others swapped tips about which stores had stock and how to circumvent strict import restrictions on foreign formula brands.

Now, mothers such as Granados are offering their freezer stashes to strangers on the internet.

“I didn’t even know donation was a thing until a month ago,” she said. “When I saw people were struggling, I thought, why not?”

The government, too, has stepped up its efforts to help.

Late Wednesday, President Joe Biden invoked the Defense Production Act to quickly boost the domestic formula supply and to begin flying in foreign stock from overseas. The move followed an announcement by the Food and Drug Administration earlier this week to temporarily loosen rules for some foreign formula manufacturers to sell their products in the United States.

The agency also entered a consent decree with the country’s largest formula maker, Abbot Laboratories, to reopen its Sturgis, Michigan, plant after serious health and safety violations were discovered there in February. Abbott and other formula makers will appear before the House Committee on Energy and Commerce next week.

Meanwhile, the White House has urged states to loosen restrictions on the brand, type and size of formula that families can buy using government assistance. The Supplemental Nutritional Program for Women, Infants and Children, or WIC, pays for about half of the formula sold in the United States, and low-income families who rely on it have been hit particularly hard by the shortage.

Still, it’s not clear how quick or widespread relief will be. Abbott has said products from its Sturgis plant would not reach store shelves before August. Foreign manufacturers are just now sending applications to the FDA. And the bulk of two key formula ingredients — high-oleic sunflower and safflower oil — is stuck behind the front lines in Ukraine.

For Bay Area mom Megan Vieira, there’s no time to wait and see. Though she exclusively pumped breast milk for her daughter, and later breastfed her son, the 38-year-old is preparing to dry up her milk when her third child is delivered at the end of May.

“I’ve never suppressed my milk before, but I’ll need to do that to start radiation,” said Vieira, who was diagnosed with breast cancer days after she learned she was expecting again. “I may be able to feed him for a week or two, if it works out with surgery and chemo. But after that I can’t.”

With formula scarce, she has started stockpiling donor milk instead.

“Breastfeeding is a really difficult thing to do, and it’s always been kind of stressful for me,” she said. “But tracking down donor milk is its own brand of stress.”

Although it’s now mostly done over the internet, milk-sharing is an ancient custom that transcends cultures, geography and religions, experts said. One Jewish tradition holds that all converts to the faith are descendants of children nursed by the matriarch Sarah. In Muslim communities, nursing someone else’s child creates a lifelong obligation and a kinship between two families.

But the practice also has a coercive past, according to Cecilia Tomori, an associate professor in the Johns Hopkins School of Nursing, who studies infant feeding. For millennia, poor women have found work as wet nurses, endangering their own infants to earn money for their families. In the U.S., enslaved women were forced to nurse the children of slaveholders while their own babies starved.

Infant formula has its own ugly history. UNICEF estimates that more than a million infants died each year as a result of predatory formula marketing that discouraged breast feeding through the 1970s and early ‘80s.

Today, most American families use some combination of breast milk and formula between birth and age 1, government data show. Yet the two feeding options are often posed as bitter enemies. For many formula-feeding parents, the shortage has intensified feelings of guilt and shame over the choice not to nurse, or the struggle to make enough milk for their babies.

Such struggles are closely tied to postpartum depression. But they are also intimately bound up with poverty. While the majority of birthing parents say they want to nurse their babies, data show those living in or near poverty are half as likely to succeed at it.

“There’s this idea of individual moral obligation [around infant feeding], when in fact the entire story is about structural failures,” Tomori said. “If we actually cared about how to support people ... we would provide paid leave, we would provide skilled lactation support, and we would provide human milk banks.”

Such banks do exist, but their reach is limited. While some donor breast milk is made available by prescription to parents like cancer patient Vieira, most is sent to neonatal intensive care units, where it is given to premature and low birthweight infants, said Bautista, of the Mothers’ Milk Bank. For these babies, human milk is not only food, but life-saving medicine.

That’s because the smallest infants are at risk for a devastating digestive complication called necrotizing enterocolitis, or NEC. NEC kills about a third of all babies who get it, and leaves many others with lifelong complications, said Stellwagen, of University of California Health Milk Bank. Decades of studies show those who receive breast milk — whether a parent’s or a donor’s — are far less likely to fall ill than those who receive only formula in their first weeks of life.

“The need for donor milk is constant,” Bautista said. “Milk banks like us need to continuously recruit donors [in order to meet demand].”

As with formula, the demand for donor milk is up significantly this year compared with the same period in 2021. While Bautista and Stellwagen were delighted by the sudden interest in donation, they cautioned against informal milk-sharing.

“As a family you could be very tempted to take it, and it’s such a selfless gift — however, you’re not going to be able to vet the donor” in the way a milk bank can, Stellwagen said.

Milk bank donors must answer detailed questions about their diet and drug use, as well as about piercings, tattoos, sex partners and even recent incarceration, Bautista said. They must provide medical records and get written permission from their obstetrician and their baby’s pediatrician to donate. All milk bank products are pasteurized and tested for contamination, and donors must get special blood tests before their milk can be accepted.

For Granados and many others, that’s simply not feasible — especially with the demands of a job and a new baby.

“I tried reaching out to the banks, but they have a lot of requirements and I don’t have the time,” she said. “I’m so busy with work, and my kid.”

For Vieira, prescription donor milk is likewise out of reach. The cost can exceed $150 a liter — enough to feed a newborn for two days, or a 3-month-old for one.

Instead, she’s stocked her new deep freezer with the kindness of strangers.

“It was stressful hearing about the formula shortage and thinking, what if I can’t get this baby food?” the mother said. “Now there’s a sense of security, feeling like this kid is going to eat.”