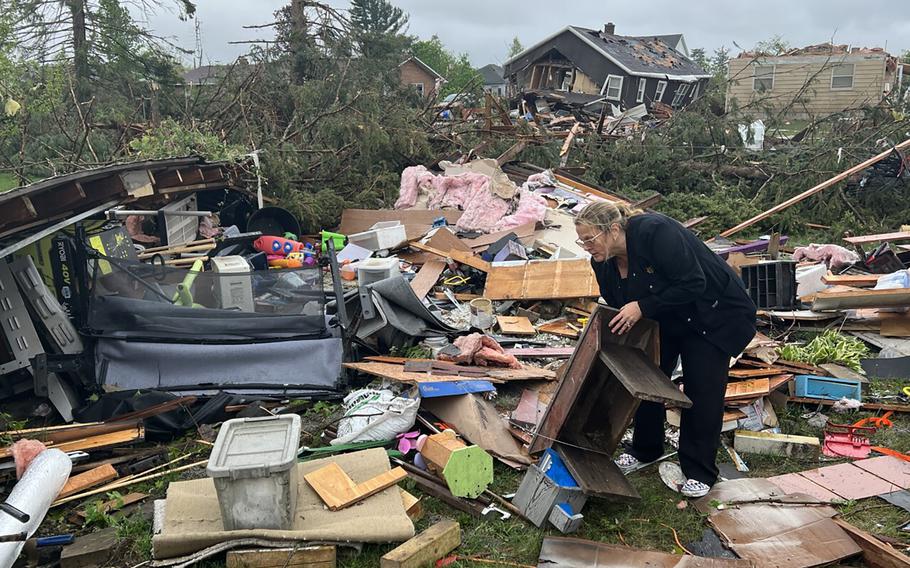 Theresa Haske sorts through debris from what was her garage after a tornado tore through Gaylord, Mich., Friday, May 20, 2022. (John Russell/AP)

GAYLORD, Mich. — A rare northern Michigan tornado tore through a small community on Friday, killing at least one person and injuring more than 40 others as it flipped vehicles, tore roofs from buildings and downed trees and power lines.

Mike Klepadlo, who owns the car repair shop Alter-Start North, said he and his workers took cover in a bathroom.

"I'm lucky I'm alive. It blew the back off the building," he said. "Twenty feet of the back wall is gone. The whole roof is missing. At least half the building is still here. It's bad."

Emma Goddard, 15, said she was working at the Tropical Smoothie Cafe when she got a phone alert about the tornado. Thinking the weather outside looked "stormy, but not scary," she dismissed it and returned to what she was doing. Her mother then called and she assured her mom she was OK.

Two minutes later, she was pouring a customer's smoothie when her coworker's mom rushed in yelling for them to get to the back of the building, Goddard told The Associated Press by text message. They took shelter in the walk-in cooler, where they could hear windows shattering.

"I was crammed shoulder-to-shoulder with my seven co-workers, two of my co-workers' parents and a lady from Door Dash coming to pick up her smoothies."

When they left the cooler about 15 minutes later and stepped outside, they saw "some of our cars in pieces and insulation all over the ground," Goddard said. Three neighboring businesses were destroyed, she said.

Brian Lawson, a spokesman for Munson Healthcare, said Otsego Memorial Hospital was treating 23 people injured by the tornado and that one person was killed. He didn't know the conditions of the injured or the name of the person who died.

The Michigan State Patrol confirmed that one person was killed, saying in a tweet that more than 40 others were hurt and being treated at area hospitals. The patrol planned to hold a briefing Saturday morning.

"I've never seen anything like this in my life," Mayor Todd Sharrard said. "I'm numb."

Video posted online showed a dark funnel cloud materialize out of a cloud as nervous drivers looked on or slowly drove away, uncertain of its path.

Other video showed extensive damage along the city's Main Street. One building appeared to be largely collapsed and a Goodwill store was badly damaged. A collapsed utility pole lay on the side of the road, and debris, including what appeared to be electrical wires and parts of a Marathon gas station, was scattered all along the street.

The Red Cross set up a shelter at a church.

Brandie Slough, 42, said she and a teen daughter sought safety in a restroom at a Culver's. Windows of the fast food restaurant were blown out when they emerged, and her pickup truck had been flipped on its roof in the parking lot.

"We shook our heads in disbelief but are thankful to be safe. At that point, who cares about the truck," Slough said.

Eddie Thrasher, 55, said he was sitting in his car outside an auto parts store when the tornado seemed to appear above him.

"There are roofs ripped off businesses, a row of industrial-type warehouses," Thrasher said. "RVs were flipped upside down and destroyed. There were a lot of emergency vehicles heading from the east side of town."

He said he ran into the store to ride it out.

"My adrenaline was going like crazy," Thrasher said. "In less than five minutes it was over."

Extreme winds are uncommon in this part of Michigan because the Great Lakes suck energy out of storms, especially early in spring when the lakes are very cold, said Jim Keysor, a Gaylord-based meteorologist with the National Weather Service.

"Many kids and young adults would have never experienced any direct severe weather if they had lived in Gaylord their entire lives," he said.

The last time Gaylord had a severe wind storm was in 1998, when straight-line winds reached 100 mph, Keysor said. He said the conditions that spawned Friday's twister included a cold front moving in from Wisconsin and hitting hot and humid air over Gaylord, with the added ingredient of turning winds in the lower part of the atmosphere.

Gaylord, known as the "Alpine Village," is set to celebrate its 100th birthday this year, with a centennial celebration that will include a parade and open house at City Hall later this summer.

The community also holds the annual Alpenfest in July, an Alpine-inspired celebration honoring the city's heritage and a partnership with a sister city in Switzerland.