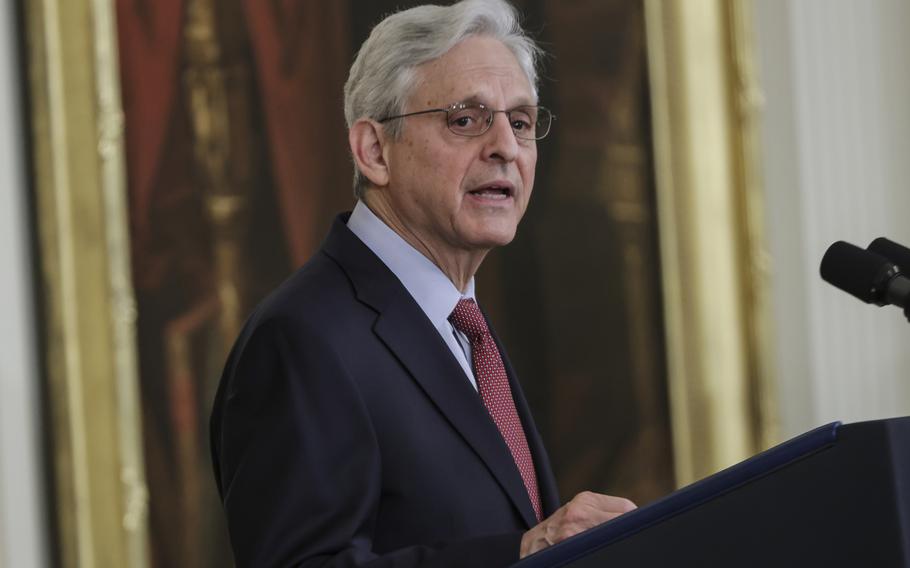 WASHINGTON - With the nation still reeling from a racist mass shooting in Buffalo, Attorney General Merrick Garland on Friday welcomed Black and Asian American community leaders to the Justice Department to shine a spotlight on new federal efforts to bolster hate-crime reporting.

Garland launched an internal review last year to develop new policies and his announcement represented some of the results. He unveiled new guidelines to help localities raise awareness of hate incidents, particularly those that target Asian Americans during the coronavirus pandemic. And he announced $10 million in new grant funding to help states establish reporting hotlines and to assist police agencies with sending data to the federal government.

“We are now gathered in the wake of a horrific and painful reminder of the urgency and importance of this task,” Garland said in the Justice Department’s Great Hall. Hate crimes “bring immediate devastation. They inflict lasting fear.”

Garland introduced Ana Paula Noguez Mercado, a community advocate and interpreter, as the Justice Department’s first language access coordinator to help provide information on hate-crimes reporting to immigrant communities. She will be based in the Office for Access to Justice, which Garland reestablished after it was shuttered during the Trump administration. On Wednesday, he named Rachel Rossi, who had been working as the department’s hate-crimes response coordinator, to lead that office.

The announcement was planned before the mass shooting in a Buffalo supermarket that left 10 Black people dead last weekend. Police have charged Payton Gendron, 18, a White man, who has pleaded not guilty to first-degree murder. The Justice Department is also pursuing a federal hate-crimes investigation.

Friday marked the first anniversary of Congress’s approval of a pair of bills - the Covid-19 Hate Crimes Act and the Jabara-Heyer No Hate Act - that aim to bring more resources to the federal government’s efforts to combat hate crimes, including working with state and local law enforcement agencies. Among those in attendance were Susan Bro - the mother of Heather Heyer, a counterprotester who was killed during a white supremacist rally in Charlottesville in 2017 - and family members of Khalid Jabara, a Lebanese immigrant killed by a neighbor in Oklahoma in 2016.

Victoria Jabara, Khalid’s sister, said Garland’s announcement was the first step toward “putting real programs in place” after the legislation.

Hate crimes have been rising across the country for the past several years, according to statistics compiled by the FBI. Last fall, the agency reported a total of 8,305 hate crimes, the most since 2001 and third-highest number since the federal government began tracking such data nearly three decades ago.

Yet activist groups said the FBI statistics represent a major undercount because of inconsistent reporting standards, a lack of training for local police and a fear of contacting authorities in some marginalized communities.

Stop AAPI Hate, a group that tracks incidents targeting Asian Americans during the pandemic, tallied more than 11,000 self-reported incidents from March 2020 through March 2022. Of those, 63% consisted of verbal harassment, the organization said, with physical assaults making up 16%.

The federal government’s ability to prosecute bias-motivated cases is limited, however. Since January 2021, the Justice Department has charged more than 40 defendants with federal hate crimes and obtained convictions of at least 35 of them, officials said.

“The racism that’s always in our country needs eternal vigilance, but this kind of focus is important,” said Sen. Mazie Hirono, D-Hawaii, who helped write the Covid-19 Hate Crimes Act. “It’s an ongoing effort because you can’t eradicate hate unless you change a whole bunch of other things, including the teaching of our own history.”

During a meeting with community advocates in Los Angeles last month, Associate Attorney General Vanita Gupta, an Indian American, recalled a group of men targeting her family with racist slurs for South Asians while they were at a McDonald’s in England, where she lived as a child. Gupta said the experience left her feeling embarrassed and as though she did not belong in the country.

“We have seen too much hate in the last year, and a rise in it,” Gupta said Friday.