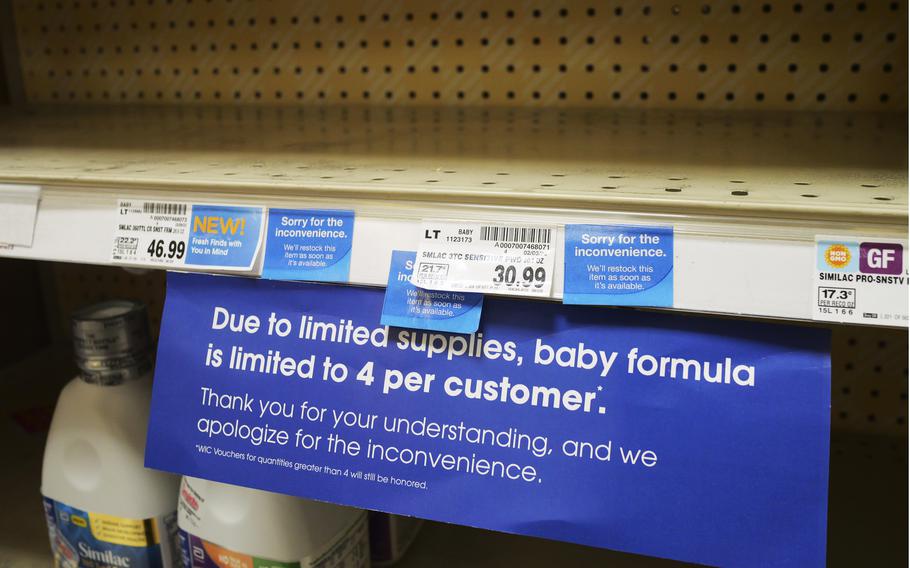 A due to limited supplies sign is shown on the baby formula shelf at a grocery store Tuesday, May 10, 2022, in Salt Lake City. Parents across much of the U.S. are scrambling to find baby formula after a combination of supply disruptions and safety recalls have swept many of the leading brands off store shelves. (Rick Bowmer/AP)

U.S. military aircraft will deliver 132 pallets of baby formula from Germany to Indianapolis over the weekend, in support of a Biden administration initiative that aims to quickly increase supplies of the food source amid a national shortage.

The flights are part of Operation Fly Formula, which was launched after President Joe Biden authorized the Agriculture Department and the Department of Health and Human Services to request Pentagon-contracted commercial planes to deliver formula from abroad. Military planes will transport the supplies this time, as no commercial aircraft was available, the White House said.

The imports will fill immediate gaps while also buying time for domestic manufacturers to ramp up production. The military’s involvement in transporting baby formula reflects the urgency of the shortage, which is particularly hitting medically-vulnerable babies and some older children who may rely on formula due to life-threatening food allergies.

The White House said it expects the majority of the flights to be conducted with commercial contract aircraft, though the military will evaluate and assign them depending on the requirements.

This weekend’s flights will carry Nestlé’s Alfamino Infant and Alfamino Junior formula. Another 114 pallets of Gerber Good Start Extensive HA formula will be dispatched “in the coming days,” the White House said. The shipments are enough to fill some 1.5 million 8-ounce bottles.

All the formula being shipped are hypoallergenic and can be fed to babies intolerant of protein in cow milk. “They serve a critical medical purpose,” the White House said.

The formula shortfall comes amid global supply chain disruptions tied to the coronavirus pandemic. But the shortage worsened when Abbott Laboratories recalled products manufactured at a facility in Sturgis, Mich., after a sanitation scare when four infants fell ill, of which two later died. The plant was later shut but the Food and Drug Administration has since reached an agreement with Abbott to reopen the facility.

Abbott is one of four major companies that are responsible for about 90 percent of infant formula supply in the United States. It is also a major supplier to WIC - a food assistance program for women and babies. Caregivers are usually restricted to just one brand of baby formula with WIC vouchers, but the House and Senate recently passed legislation allowing participants to buy whatever brand is available. The bill now awaits Biden’s signature.

Indiana, where the initial Operation Fly Formula planes will land, is one of a handful of states that do not have WIC contracts with Abbott. It has already allowed mothers that receive WIC assistance to purchase other brands.