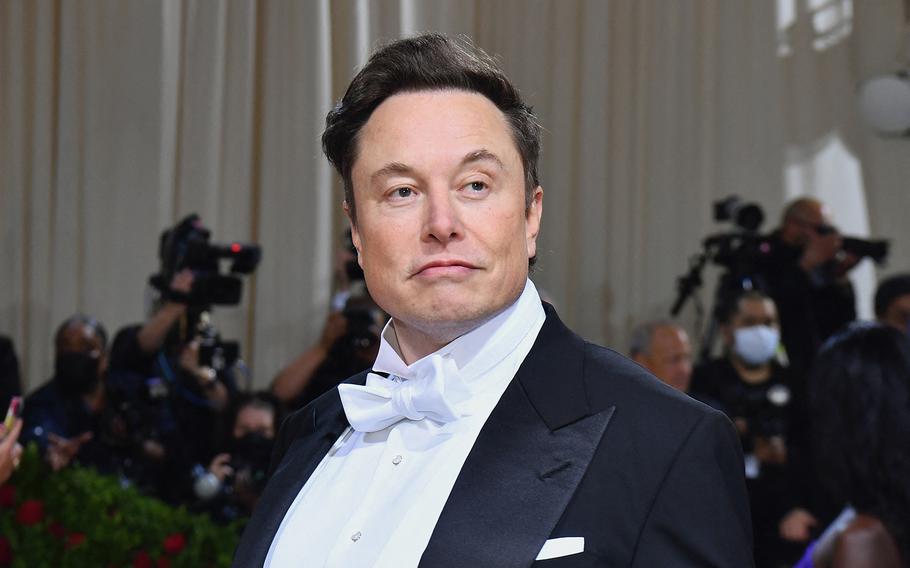 Elon Musk arrives for the 2022 Met Gala at the Metropolitan Museum of Art on May 2, 2022, in New York. (Angela Weiss/AFP via Getty Images/TNS)

(Tribune News Service) — Elon Musk doubled down on his innocence in a flurry of tweets early Friday amid allegations that he sexually harassed a SpaceX flight attendant in 2016.

The world’s richest man took to Twitter shortly after midnight to blast the claims, outlined in a Business Insider article published on Thursday, as “utterly untrue.” According to the report, based on documents and a series of interviews, SpaceX shelled out $250,000, which included a nondisclosure agreement, after its founder was accused of exposing himself and propositioning an employee for sex.

“The attacks against me should be viewed through a political lens — this is their standard (despicable) playbook — but nothing will deter me from fighting for a good future and your right to free speech,” Musk wrote.

The incident in question allegedly unfolded during a flight to London in 2016, when the Tesla CEO disrobed ahead of a massage and offered to buy the woman — an avid equestrian — a horse in exchange for sexual flavors. It was recalled for Business Insider by a friend of the flight attendant, who is not bound by the NDA, but spoke on the condition of anonymity.

“He whipped out his penis, it was erect,” she said.

Musk also slammed the friend who provided the interview, calling her “a far left activist/actress in LA with a major political axe to grind.”

“But I have a challenge to this liar who claims their friend saw me ‘exposed’ — describe just one thing, anything at all (scars tattoos, ...) that isn’t known to the public,” he tweeted on Friday. “She won’t be able to do so, because it never happened.”

The 50-year-old billionaire also denied responding to a request for comment from Business Insider, which quoted him as saying there is “a lot more to this story.”

The recent article comes on heels of Musk’s vow to vote for Republicans in future elections, even though he previously voted for Democrats, including former President Barack Obama. It also comes amid Musk’s efforts too takeover Twitter, a headline-grabbing move already rife with drama.

Last month, the social media company revealed that it had agreed to sell to Musk at a cost of $54.20 per share, making him the platform’s new owner, pending regulatory approval by shareholders.

In the weeks since however, Musk has butted heads with the Twitter’s CEO over the number of bots and phony accounts on the platform. He recently announced the $44 billion deal would not move forward until the company could provide some clarity on the figures.