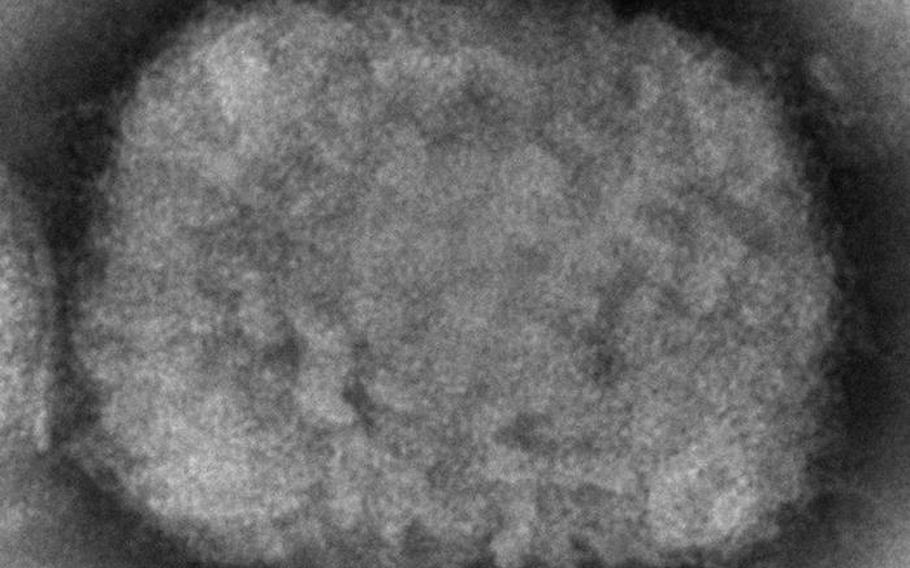 An electron microscope image of a monkeypox viron. A man who recently traveled to Canada was tested for the virus Tuesday, and the infection was confirmed by the CDC on Wednesday, the Massachusetts Department of Public Health said in a statement. (Cynthia S. Goldsmith, Russell Regner/CDC)

Massachusetts health authorities confirmed a case of monkeypox Wednesday after the Centers for Disease Control and Prevention said it was monitoring the possible spread of the rare but potentially serious viral illness.

A man who recently traveled to Canada was tested for the virus Tuesday, and the infection was confirmed by the CDC on Wednesday, the Massachusetts Department of Public Health said in a statement. The news comes the same day British and Portuguese health authorities reported clusters of new cases, heightening concerns that monkeypox is spreading undetected outside of central and West Africa, where it is typically found.

The CDC is monitoring six Americans for potential monkeypox infection after they shared a flight with a British patient who tested positive for the virus, senior CDC official Jennifer McQuiston told STAT on Tuesday.

U.S. officials said clinicians should consider a diagnosis of monkeypox in people with an otherwise unexplained rash who also traveled to a country that had a confirmed case, had contact with someone who may be infected or is a man who had sexual contact with other men.

Experts are trying to determine how the virus is spreading and how the cases may be connected. Past outbreaks of monkeypox have typically been limited to small groups, said Tom Inglesby, director of the Johns Hopkins Center for Health Security.

“So I think the risk to the general public at this point, from the information we have, is very, very low,” he said.

Still, the latest outbreak is unusual, Inglesby said, with cases popping up in several countries simultaneously.

“We don’t really have the sense yet of what’s driving it. . . . There isn’t a travel link that’s identified that brings these cases all together,” he said.

Two newly confirmed cases in Britain, one in London and one in southeast England, have no travel links to a country where monkeypox is endemic, indicating possible community transmission, according to the British Health Security Agency.

British health authorities said Wednesday that nine infections have been confirmed in England since May 6, “with recent cases predominantly in gay, bisexual or men who have sex with men.” Two cases that were confirmed Saturday were found among a family unit with no connection to others who later become infected.

The agency is advising people in those groups to be especially “alert to any unusual rashes or lesions on any part of their body.” Monkeypox could transmit through physical contact during sex, the agency said, as well as other close contact with someone infected, such as touching clothing and linens the person has used.

The number of cases detected in such a short period is unprecedented, said Jamie Lloyd-Smith, a University of California at Los Angeles professor who has studied zoonotic viruses, or infections transmissible from animals to humans, for 20 years.

“It is surprising to see monkeypox appearing to spread internationally like this,” Lloyd-Smith said, adding that it is also “not impossible under the existing paradigm for how monkeypox spreads.”

Monkeypox does not have epidemic-causing transmission potential, such as that of the coronavirus. Also, unlike COVID-19, the disease is more noticeable, making detection easier.

Monkeypox causes a milder infection than smallpox. The viral illness most often begins with flu-like symptoms and swelling of the lymph nodes. Eventually, “pox,” fluid-filled blisters, spread across a person’s body.

The Massachusetts case is the first in the United States this year. The other most recent case was confirmed in November, when a Maryland resident who had recently returned from Nigeria contracted the infection and had mild symptoms. Another case was detected in July after a Dallas resident traveling from Nigeria flew through two U.S. airports. No other cases were found at the time.

In 2013, U.S. health authorities identified 47 confirmed and probable cases in six states in the first outbreak of monkeypox in the Western Hemisphere that was later linked to a shipment of infected rodents from Africa.