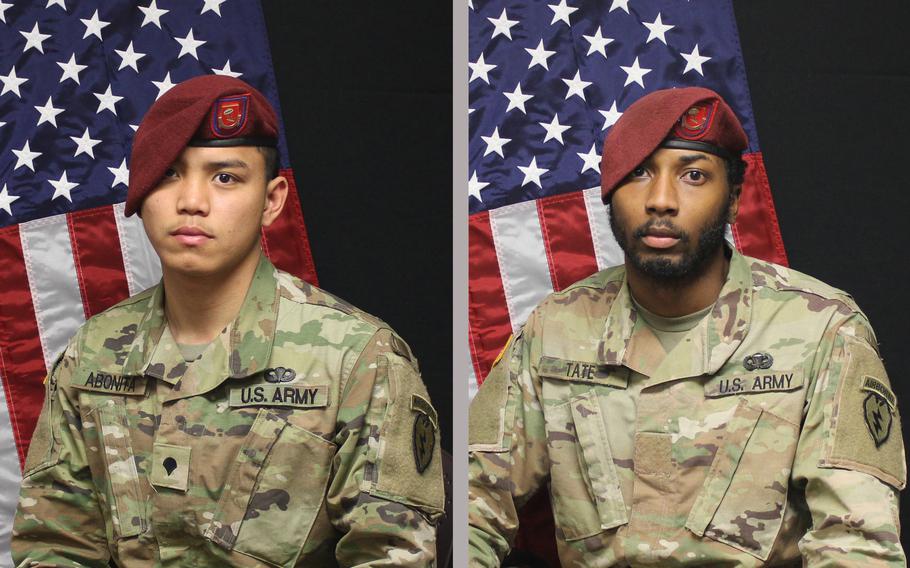 The Army has identified two soldiers killed Friday in a crash involving four vehicles that left two other soldiers injured in Anchorage, Alaska.

Killed in the crash were Spc. Wyne Lyndon Jacob Abonita, 22, of Yokosuka, Japan, and Pvt. Valsin David Tate Jr., 23, of New Orleans, the Army said in a news release Tuesday.

Both were fire control specialists assigned to the 2nd Battalion, 377th Parachute Field Artillery Regiment, at Joint Base Elmendorf-Richardson, the Army said.

The Anchorage Police Department is investigating the crash, the Army said, but provided no details on the circumstances.

A third soldier injured in the crash was treated and released, while a fourth was admitted to Providence Alaska Medical Center, according to an Army news release Saturday.

Army spokesman John Pennell said Tuesday that the current medical condition of the fourth soldier was not known.

A Dodge Challenger and Mitsubishi Galant were traveling into Anchorage on Glenn Highway when the drivers of both cars lost control, according to a Friday report by the Anchorage Daily News.

The Challenger veered off the road and hit a tree, and the car’s two occupants were taken to the hospital with injuries not considered life threatening, the newspaper said.

The Galant hit a Toyota pickup traveling in the same direction, and both vehicles then crossed over the median into opposing traffic. The Galant then hit a Chevy Silverado, and both caught fire, the newspaper said.

The driver and a passenger in the Galant were pronounced dead at the scene, according to the newspaper, which did not publish their names nor military affiliation.

The soldiers’ battalion commander, Lt. Col. Dustin Blair, said in the news release that “the entire battalion is mourning the loss of two of our paratroopers.”

Abonita joined the Army in March 2019. He trained at Fort Jackson, S.C., Fort Sill, Okla., and Fort Benning, Ga. He was stationed at Elmendorf-Richardson in September 2019, the Army said.

Tate joined the Army in October 2018 and also underwent training at Fort Jackson, Fort Sill and Fort Benning. He arrived in Alaska in April 2019, the Army said.