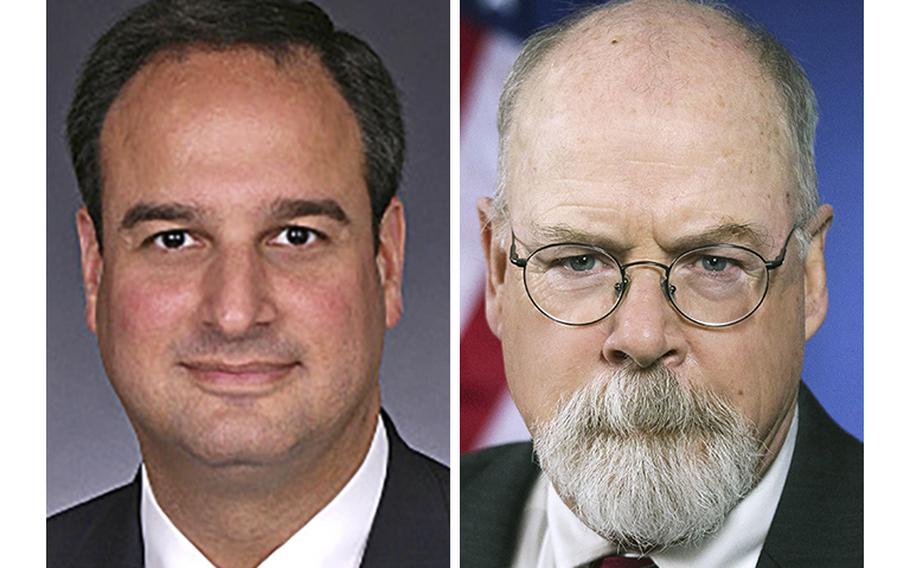 Attorney Michael Sussmann, left, and Special Counsel John Durham, who on Thursday, Sept. 16, 2021, charged Sussmann with making a false statement to the FBI. (Perkins Coie and U.S. Department of Justice)

Lawyers for Michael Sussmann, an attorney with ties to the Democratic Party who is about to go on trial for allegedly lying to the FBI in the heated final days of the 2016 presidential campaign, say they plan to call a former New York Times reporter as a witness to help show Sussmann is not guilty.

Sussmann allegedly told the top lawyer at the FBI in September 2016 that he had information to share about possible cyber links between Republican nominee Donald Trump's business and a Russian bank. He faces a single count of lying to the FBI because he allegedly claimed he was not bringing them the information on behalf of any client but was doing so at the behest of two of his clients: Hillary Clinton's campaign team and a technology executive named Rodney Joffe.

The trial is scheduled to begin next week in D.C. federal court. Sean M. Berkowitz, a lawyer for Sussmann, said in court Monday that the defense team plans to call former Times reporter Eric Lichtblau to testify about his communications with Sussmann and Joffe.

Berkowitz said in court that after speaking with lawyers for the New York Times, his team does not expect the news organization to object to Lichtblau testifying about those topics. But he said the Times did have concerns about the possibility that Lichtblau would be asked about independent research he did on computer topics related to Sussmann's efforts. Reached for comment by phone, Lichtblau referred questions to his lawyer, who declined to comment. A spokeswoman for the Times also declined to comment.

In court, Berkowitz said he expected lawyers for the Times to file something with the court about the issue at some point this week.

Berkowitz also said he plans to call Justice Department Inspector General Michael Horowitz, who examined the FBI's handling of investigations into Hillary Clinton and a former campaign adviser to Donald Trump, and issued reports sharply critical of the FBI's work in both those cases.

Berkowitz said he will call Horowitz as a witness to talk about how Sussmann provided "information to the inspector general that also involved Mr. Joffe."

The Sussmann trial will be a closely-watched legal confrontation pitting John Durham, a holdover special counsel from the Trump administration, against a longtime Democratic lawyer. The former president and his supporters have trumpeted the case against Sussmann as evidence the FBI abused its investigative powers and mistreated the Republican candidate for president, while Democrats have argued that Durham is chasing conspiracy theories about the "Deep State."

Sussmann has pleaded not guilty. In a motion to dismiss the case, he argued that even if he did as Durham alleged, that would not be a federal crime, because the question of who his clients were was irrelevant to the FBI. As part of their evidence, Sussmann's lawyers said they have reviewed more than 300 FBI emails that show the bureau understood Sussmann worked for Democratic campaign entities.

Durham's team contends that if the bureau had known Sussmann was working on behalf of two clients with political interests, agents might have asked more questions about the source of his information or taken different investigative steps.

The information Sussmann presented to the FBI was computer data showing possibly nefarious computer connections between the Trump Organization, which is the former president's business entity, and a Russian financial institution known as Alfa Bank. The FBI investigated the matter but ultimately concluded the computer data did not show anything illegal or problematic.

Durham was tapped by then-Attorney General William P. Barr in 2019 to review the FBI's 2016 investigation of Trump's campaign and whether it conspired with Russia. Barr named him a special counsel soon before leaving office.