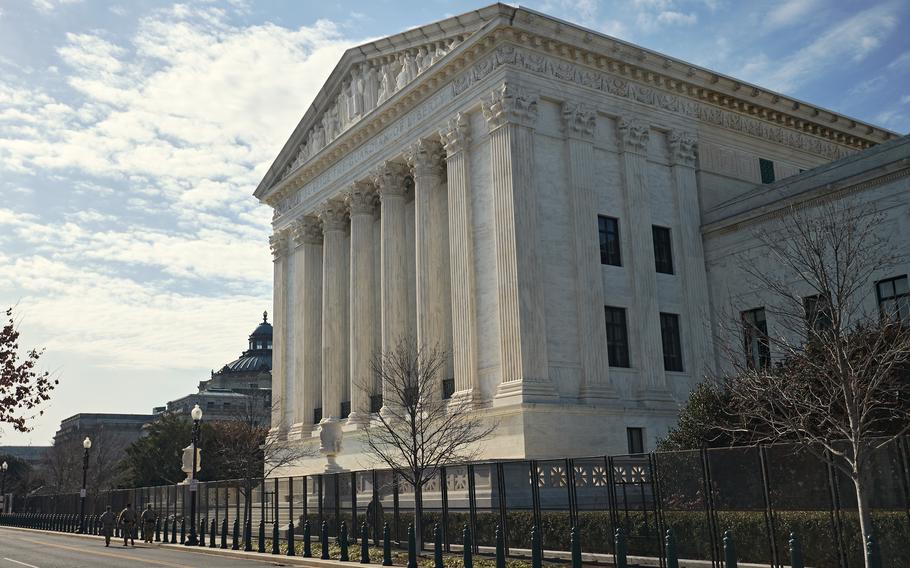 Both services have removed commanders’ powers to deny leave to service members seeking abortions. In addition, soldiers and airmen now need tell commanders only that they’re taking leave for a medical procedure.

It’s unclear how many service women have been denied leave to get an abortion since 1973, when the Supreme Court decided in Roe v. Wade that abortion is a constitutionally protected right.

But the policy change has been long sought, particularly for service women overseas or on deployment, who often faced extra time, financial and travel obstacles. 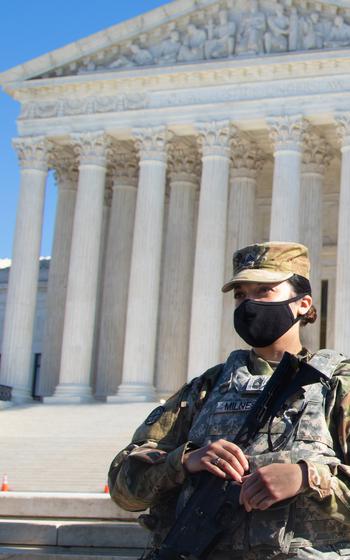 A soldier with the Kansas National Guard stands in front of the U.S. Supreme Court Feb. 5, 2021. A draft Supreme Court decision that would overturn Roe v. Wade was recently leaked, not long after the Army and Air Force issued guidance that would prevent commanders from denying leave to service members seeking an abortion. (Joe Legros/U.S. Army)

“Given the time-sensitive nature of the procedure, pregnancy termination will not require unit commander pre-approval,” the updated Army policy states. “Soldiers will keep their commander notified of any expected absences. ... (Soldiers) may do this without providing the specifics of the underlying procedure.”

The Air Force revised its guidance in June to incorporate similar language. The change stems from an initiative to identify and address barriers to women’s careers in policies, processes and programs, said Laura Tingley, an Air Force spokeswoman.

The new guidance includes guaranteed convalescent leave for women who miscarried or delivered a stillborn child.

“The intent is not to have someone go AWOL for two weeks and then show back up,” said Amy Kramer, the manpower and reserve affairs lead action officer for the policy.

Instead, it’s intended to impress upon commanders that they must grant immediate leave for someone seeking a pregnancy termination, she said.

But it also allows soldiers to bypass commanders. Research by reproductive rights groups has found that many military women who seek an abortion prefer to do so without notifying their chain of command.

“We hope that that paragraph makes it easier and puts the decision in the soldier’s hands,” Kramer said. “It takes choice from commanders and gives it to soldiers.”

Ibis Reproductive Health, a research group that has done numerous studies on military women’s reproductive health care, said in a 2019 paper that requirements to tell commanders about pregnancies are one of the biggest obstacles to abortion access for deployed service women, second only to the military’s lack of abortion services.

“We know from multiple studies that there was fear of reprimand for sexual activity,” said Laura Fix, the study’s lead author. “And there are often concerns about perceived stigma about having an abortion.”

But the future of abortion availability in the U.S. was thrown into disarray Monday, when a draft Supreme Court opinion overturning Roe v. Wade was leaked.

If the outcome heralded by the draft opinion comes to pass, abortion would be banned or severely circumscribed in some 23 Republican-led states, according to the Guttmacher Institute, a nonprofit research group that focuses on reproductive health and supports abortion rights.

Abortion rights opponents in Republican-led states have been working to ensure that the strictest possible limits take effect if the Supreme Court reverses the nearly 50-year-old Roe v. Wade decision.

Thirteen of those states have “trigger laws” that would go into effect immediately and outlaw nearly all abortions, without exception for rape or incest.

On Wednesday, Louisiana lawmakers advanced a bill that would classify abortion as a homicide, allowing prosecutors to bring criminal charges against women who end their pregnancies.

The repercussions of a Roe reversal for pregnant women in the military would be profound.

“The SCOTUS decision, if final, will make obtaining an abortion for active-duty women at most U.S. bases as difficult as overseas,” said Dr. Jeffrey Jensen, a professor of obstetrics and gynecology at Oregon Health and Science University.

Jensen, a Navy doctor from 1988 to 1992, said that over two years in the Philippines, he treated about a dozen sailors and family members hospitalized with infections after getting illegal abortions locally.

“This is going to disproportionately affect the most vulnerable service women,” Jensen said. “It saddens me to think that women have to take on a clandestine act just to take care of their health.”

But anti-abortion groups were jubilant over the draft opinion, which found that the reasoning for abortion as a constitutionally protected right in the Roe decision was “exceptionally weak.”

Arkansas state Sen. Jason Rapert, a Republican who introduced his state’s trigger law that would make performing an abortion a felony punishable by up to 10 years in prison, said the law could take effect within minutes of the Supreme Court decision, according to The Washington Post.

“I’ll be happy to see the butcher mill in Little Rock, Arkansas, shut down for good,” Rapert told the Post.

Young enlisted women have high rates of unintended pregnancy, but military treatment facilities don’t perform abortions, and military insurance doesn’t cover it except in cases of rape, incest or a life-endangering pregnancy.

“We are desperately looking for an Italian doctor or clinic who is willing to administer the abortion pill to us,” said an unidentified service woman stationed in Italy, according to the 2019 Ibis report. “However, we haven’t had any luck.”

She had been seeking to procure a medication abortion from the Canadian telemedicine service Women On Web. Medication abortion uses a two-drug combination that can be taken at home and is authorized in the first 10 weeks of pregnancy.

For a few years after Roe v. Wade was decided, military women had wide access to abortion and made use of it. In one year in the mid-1970s, some 26,000 service women and dependents got abortions.

Most of them were done in military hospitals, and all of them were covered by insurance, according to a Congressional Research Office report.

Restrictions on access and insurance coverage began in 1976, when Congress banned the use of federal funds for the procedure. By the late 1980s, almost no abortions were being performed by military doctors or were covered by military insurance.