Karine Jean-Pierre to be next White House press secretary 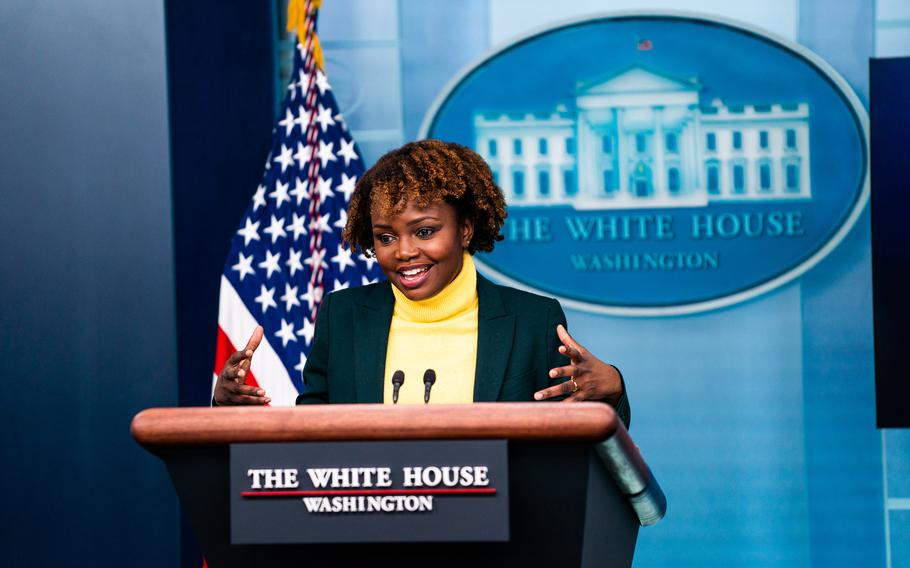 WASHINGTON — Karine Jean-Pierre will take over as President Joe Biden’s next White House press secretary within weeks, replacing Jen Psaki who plans to depart for a job in cable news, the White House announced Thursday.

Jean-Pierre, who has served as Psaki’s top deputy since the start of the administration, will immediately become the public face of the Biden White House and the first Black person to hold the high-profile job of delivering the president’s daily message and fielding questions from an often skeptical press corps.

She will assume the top spokesperson role at time when the president faces economic and political headwinds, six months before midterm elections where Democrats face an uphill battle. If Republicans retake the House, as many in both parties expect, Jean-Pierre could face numerous questions about GOP investigations into sensitive topics, although the White House counsel’s office is bringing in another communications expert, Ian Sams, to handle such inquiries.

Jean-Pierre will play a central role in shaping the narrative of Biden’s presidency, an effort the president and his aides have conceded they have failed to do successfully. The president himself has voiced frustration that he has not been able to convey his accomplishments to the public in an effective way.

As press secretary, Jean-Pierre will be responsible for holding the daily press briefing at the White House and helping advise Biden and the broader administration on communication and messaging efforts.

“It’s a real honor just to be standing here today,” Jean-Pierre said at her first briefing. “I appreciate the historic nature, I really do. But I believe being behind this podium, being in this room, being in this building, is not about one person. It’s about what we do on behalf of the American people.”

Psaki is one of the most recognizable faces in the Biden administration, due to her daily appearance at the televised briefings, where she sometimes spars with reporters or disputes the premise of their questions. Still, Psaki has reestablished the tradition of a generally courteous back-and-forth between the White House and the press.

Under former president Donald Trump, White House press secretaries often attacked the reporters they were addressing and challenged their motives, and for long stretches the White House suspended the daily press briefing altogether. The notion of the press as an “enemy of the people” acting in collusion with liberals was a central tenet of the Trump presidency.

President Biden, despite periodically chiding the media, has also said he values journalists’ contributions. At a recent gala hosted by the White House Correspondents’ Association, Biden joked that “I’m really excited to be here tonight with the only group of Americans with a lower approval rating than I have.”

He also noted that “I’ve always believed that good journalism holds up a mirror to ourselves to reflect on the good, the bad, and the true,” and he paid tribute to journalists who are covering the war in Ukraine and in some cases have died there.

Some conservatives argue that the Washington press corps is too close to the White House. Psaki is slated to join the media herself when she leaves her current hob, joining MSNBC in an on-air position.

On the Biden campaign, she served as chief of staff to then-vice presidential nominee Harris. She joined the White House as principal deputy press secretary.

Jean-Pierre was always viewed as the front-runner to replace Psaki, but other potential candidates for the role emerged in recent weeks, including Kate Bedingfield, the White House communications director, Ned Price, the State Department spokesman, and John Kirby, the Pentagon spokesman.

Bedingfield had said she does not want Psaki’s job, but after she successfully filled in at the White House press briefing when Psaki and Jean-Pierre both had covid, some White House staffers thought Biden might ask her to take it nonetheless.

Psaki’s exit, which has long been planned, comes amid the first wave of departures from the West Wing during Biden’s presidency. Jeff Zients, the coronavirus coordinator; Cedric L. Richmond, director of the White House office of pubic engagement; Gina McCarthy, the national climate adviser; and Pili Tobar, the White House deputy communications director, have all left or plan to leave in the coming weeks.