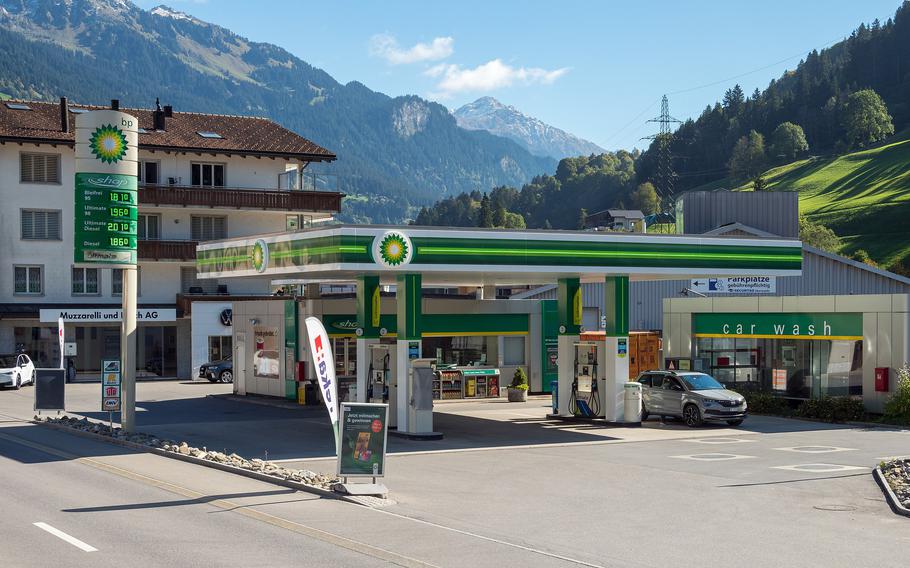 A BP gas station in Kublis, Switzerland. On Tuesday, BP reported the largest charge by far — $25.5 billion — after abandoning its 19.8% stake in Russian-owned energy company Rosneft in the first quarter. (Wikimedia Commons)

Western oil giants are taking multibillion-dollar charges for walking away from their Russian investments, but those losses have been offset by the staggering run-up in commodity prices that followed the invasion of Ukraine, financial filings show.

On Tuesday, BP reported the largest charge by far — $25.5 billion — after abandoning its 19.8% stake in state-owned energy company Rosneft in the first quarter. That penciled out to a $20.4 billion loss. But by a different measure of underlying profit, which doesn’t include the write-down, the British company’s net profit swelled to $6.2 billion, helped along by what the company called “exceptional” oil and gas trading. That’s a 51% spike from the preceding quarter and more than twice what it earned during the same three months of 2021. It also announced $2.5 billion in share buybacks.

“From the perspective of cash flow, we know that the war has raised the price of oil,” said Pavel Molchanov, an analyst with the investment bank Raymond James. “And so every company involved in the oil industry is seeing higher profitability as a result of higher oil prices.”

Oil prices have been hovering above $100 per barrel after briefly topping $130 shortly after the war began. Brent crude, the international benchmark, stood at $106 per barrel Tuesday, while the U.S.-based West Texas Intermediate crude traded around $104 per barrel. The sudden uptick in prices quickly made its way to consumers: The U.S. average for a gallon of fuel stood at $4.20 on Tuesday, according to AAA. That’s $1.30 higher than it was a year ago.

BP is among more than 850 Western companies that have cut ties with Russia following its unprovoked attack on Ukraine, according to a widely followed list from Yale University. In response to a mix of international sanctions, shipping challenges and pressure from the public, corporate leaders have closed down factories and pulled the plug on long-planned investments.

Major oil companies moved relatively quickly to depart the country as the conflict intensified, and they set the tone for other industries, said Jeffrey Sonnenfeld, a Yale professor who has been tracking business departures from Russia. BP, Shell and ExxonMobil in particular were “big first-movers that had a catalytic effect,” he said. “Some of them had oligarchic influences in the past, but so what, they got through it, and saw this as an opportunity to reset their image in an era of criticism of fossil fuels,” Sonnenfeld said.

With first-quarter corporate earnings well underway, the costs associated with those departures are coming into sharper focus. Honeywell, the industrial giant that plays in a range of markets including household appliances, chemicals and airplane parts, for example, took a $400 million hit to its financial earnings after it halted sales in the country, chief executive Darius Adamczyk told investors Friday. General Electric took a $200 million charge after suspending operations there, while Adidas said the war could pose risks to operations of up to $271 million, according to Reuters.

But the billion-dollar write-downs being recorded by energy companies are relatively small as a percentage their market values.

Shell, which has a market capitalization near $200 billion, estimated in an April 7 SEC filing that would sustain charges of $4 billion to $5 billion for leaving Russia. The French energy company TotalEnergies wrote off $4.1 billion related to its investment in Arctic LNG 2, a pipeline on Russia’s Northern Gydan peninsula. The pipeline was previously expected to begin natural gas exports in 2023, according to TotalEnergies.

Last week ExxonMobil reported $3.4 billion charge associated with its decision to wind down operations on Sakhalin island, off Russia’s southeastern coast and north of Japan. Reuters reported in late April that the Texas-based oil company had declared force majeure on contracts related to delivering the fuel to customers there, referring to an emergency contract clause by which one party avoids liability due to an unavoidable catastrophe. But the Sakhalin operations accounted for just 2% of total production last year. CEO Darren Woods said in a call with investors.

BP had a larger exposure to Russia than its peers, and moved to exit its Rosneft stake on Feb. 27.

“We took the decision to exit Russia within 96 hours of the invasion happening and today you’re seeing the financial implications of that decision,” BP CEO Bernard Looney told CNBC’s “Squawk Box Europe” on Tuesday.

For BP, the decision ended three decades of collaboration, according to a company news release. Board chair Helge Lund said the attack on Ukraine represented a “fundamental change” that led the board to conclude “that our involvement with Rosneft, a state-owned enterprise, simply cannot continue.”

In its earnings release Tuesday, the company warned investors that additional uncertainty could be on the horizon related to oil price volatility and the conflict’s impact on economic growth.