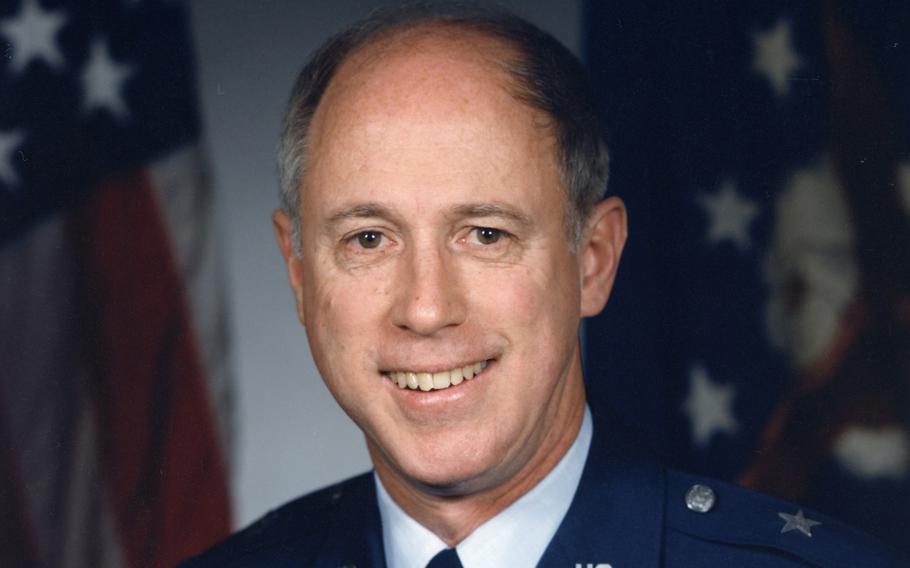 Jon A. Reynolds, a retired Air Force brigadier general who spent more than seven years as a prisoner of war after the aircraft he was piloting was shot down over North Vietnam in 1965, died April 16 at his home in Bethesda, Md. (U.S. Air Force)

Jon A. Reynolds, a retired Air Force brigadier general who spent more than seven years as a prisoner of war after the aircraft he was piloting was shot down over North Vietnam in 1965, died April 16 at his home in Bethesda, Md. He was 84.

The cause was lung cancer, said his wife, Emilee Reynolds.

Reynolds — then a captain — was based in Thailand and on his second tour of duty in Southeast Asia when his F-105 Thunderchief was struck by North Vietnamese antiaircraft fire on Nov. 28, 1965. After he ejected from the cockpit, his parachute became entangled in a tree.

He was captured and taken to the infamous “Hanoi Hilton,” the first of nine prison camps in which he was held. His injuries, which included a fractured jaw and two broken shoulders, were so severe that he could not feed or clean himself.

The prisoners were kept isolated from one another but could communicate by whispers and by tapping on walls. One asked Reynolds why guards entered his cell several times a day. Only then did he explain the extent of his injuries and that the guards were feeding him.

Not long afterward, Reynolds’s captors tried to get him to write a letter denouncing the U.S. war effort in Vietnam. When he refused, he was denied food for eight days.

Through wall-tapping, he was told to wait in his cell until the guard fell asleep after lunch. A fellow POW, Robert “Percy” Purcell, would arrange to get him some food.

“As the afternoon grew quiet, I heard scratching on the ceiling and dust and dirt were soon falling from around the single lightbulb in the ceiling of my room,” Reynolds wrote in a 2013 remembrance of Purcell for the Air Force Association. “Soon the bulb and wire dropped down a couple of feet, which was then followed by a series of long slender pieces of stale bread. My first food in eight days! Through the hole where the lightbulb had been, I saw the smiling face of Percy. He whispered a few words of encouragement, waved, and then he was gone, off to get back to his cell before his absence was discovered.”

After a U.S. bombing raid on the North Vietnamese capital of Hanoi in 1966, Reynolds, Purcell and other prisoners were shackled together and marched through the streets, as people cursed at them and threw rocks.

Reynolds’s parents, who lived near Philadelphia, had no word from their son for 16 months. He recovered from his injuries and began to write letters home, as he and the other POWs were moved from one prison camp to another. (Reynolds kept the tin cup he had as a prisoner and had a plaque attached to it, containing the nicknames of the nine camps in which he was kept, including Heartbreak Hotel, The Zoo, Dirty Bird, Little Vegas and Dogpatch.)

The signing of the Paris Peace Accords in January 1973 led to the release of almost 600 U.S. prisoners of war from North Vietnam. Reynolds was among the first POWs released, on Feb. 12, 1973.

When he spoke to his parents by telephone, his mother said, “Jon, where in the world have you been all this time?”

He came back to an America utterly different from the one he had last seen more than seven years earlier. While accompanying his family to a restaurant in Alexandria, Va., he could not get over the changes in clothing and hair styles.

“I have always maintained that the antiwar movement in the United States lengthened our stay,” Reynolds said soon after his return, in one of his few interviews about his POW experiences. “I sincerely believe it was a source of strength to the North Vietnamese.”

Reynolds remained in the Air Force and requalified as a pilot. He spent four years as a history professor at the Air Force Academy in Colorado Springs from 1975 to 1979, was on the faculty of the National War College, worked in planning, learned Chinese and served as an air and defense attaché at the U.S. Embassy in Beijing from 1984 to 1988. He later ran the training program for air attachés at the Pentagon before retiring from the Air Force in 1990.

Jon Anzuena Reynolds was born Dec. 13, 1937, in Philadelphia and grew up in the suburb of Bala Cynwyd, Pa. His father was an insurance broker, and his mother was a nurse.

On a family vacation in Canada as a teenager, he flew in an airplane that could land on water and developed a lifelong interest in flying. He studied engineering at Trinity College in Hartford, Conn., where he was in the Air Force ROTC. He joined the Air Force after graduation in 1959 and qualified as a pilot.

Reynolds received a master’s degree in 1975 and a PhD in 1980, both in history from Duke University. He was promoted to brigadier general in 1986.

After his military service, Reynolds joined Raytheon, a defense contractor, and managed the company’s operations in China from 1993 to 1999. He also served for 20 years on the board of the Smithsonian National Air and Space Museum.

Reynolds lived in Greenville, Del., for many years before settling in Bethesda.

When he was shot down in 1965, Reynolds was engaged to Emilee McCarthy, and their wedding was weeks away. During his imprisonment, she went to graduate school, taught art and married another man.

After Reynolds’s release, she called his family and spoke to her onetime fiance on the telephone.

“He literally sounded like the same Jon I had known in 1965,” she said in interview. “His voice hadn’t changed at all.”

She obtained a divorce and married Reynolds in 1974. In addition to his wife, survivors include their two children, Elizabeth Peltz of Jackson Hole, Wyo., and Andrew Reynolds of McLean, Va.; a brother; and a granddaughter.