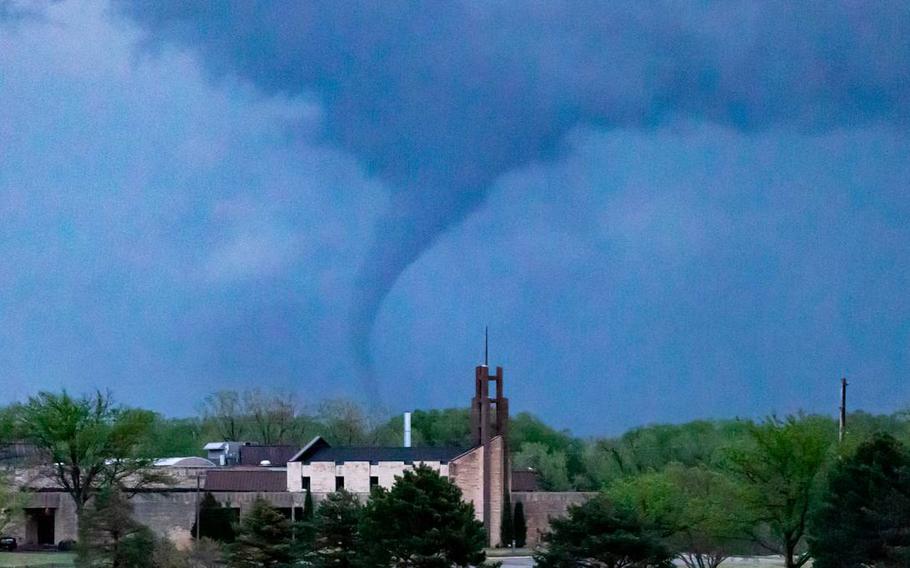 A tornado can be seen passing though Andover, Kansas, from K-96 on Friday, April 29, 2022. (Travis Heying/The Wichita Eagle)

ANDOVER, Kansas (Tribune News Service) — Flor and Aldo Delgado said they prayed in the basement of their Andover home as a tornado passed right above them, destroying their home and cars.

The couple said they never expected to experience a tornado.

“I’m at a loss of words right now. You never think you’ll live through something like that, and that it’s just something you see on TV or the movies,” Aldo said.

The couple live in Andover and saw the tornado forming around 8:15 p.m. Friday through their backyard window. The couple said they were thinking of grilling some food that day.

“We opened the patio door and suddenly saw a tornado starting to form. We started recording it at first and then realized that we needed to take cover in the basement,” Aldo says.

The couple were sitting at the bottom of the stairwell when they heard the wind starting to pick up. Within a minute, everything went dark.

“The lights started flickering and eventually went out, and within a minute from that the whole house started shaking and it was so loud. We started feeling water hitting our faces, and there was just dust everywhere. It lasted for what felt like a minute that it was right above us,” Aldo said.

“In the moment I didn’t know what to think. My wife and I just held each other and prayed that we would get through it,” Aldo said.

Growing up in Kansas, Flor Delgado says tornadoes were a norm. She didn’t think too much of them.

“At first it didn’t feel real. It’s almost kind of the joke of when we hear tornado sirens, we go outside and see what’s happening.”

That feeling quickly changed as the Delgados took cover in their basement. Flor said she could hear their home being torn apart as they prayed for their safety.

“In the moment I realized there is absolutely nothing we could do. I knew my husband felt it too because he was calm and comforting me, but at one point he just starts losing it and crying — I could hear his voice cracking as he’s praying,” Flor said.

The couple say the shaking lasted for about a minute. Afterward, Aldo called the police once the couple saw that they were trapped in basement covered in dust and debris.

“The staircase was completely covered. I turned over to the corner of our basement and saw light and rain coming through...that’s when it clicked it with me that our house was gone,” Flor said.

Aldo said that at one point he could hear someone yelling. He yelled back to get their attention. A bystander was pounding on their window.

“We opened and asked if it was safe to go outside, because at that point we didn’t know where the tornado was. We came out outside and a lot of our neighbors and bystanders came to check up on us, you know. It was comforting and made us feel secure,” Aldo said.

The couple walked away safely with only the clothes on their backs. Flor said their home, cars and personal items are gone. “We didn’t even have our wedding rings on at the time,” Flor added.

The couple’s home is one of at least 50-100 structures damaged in the path of the tornado. A GoFundMe has been set up by the family.