US no longer in ‘full-blown’ pandemic phase, Fauci says 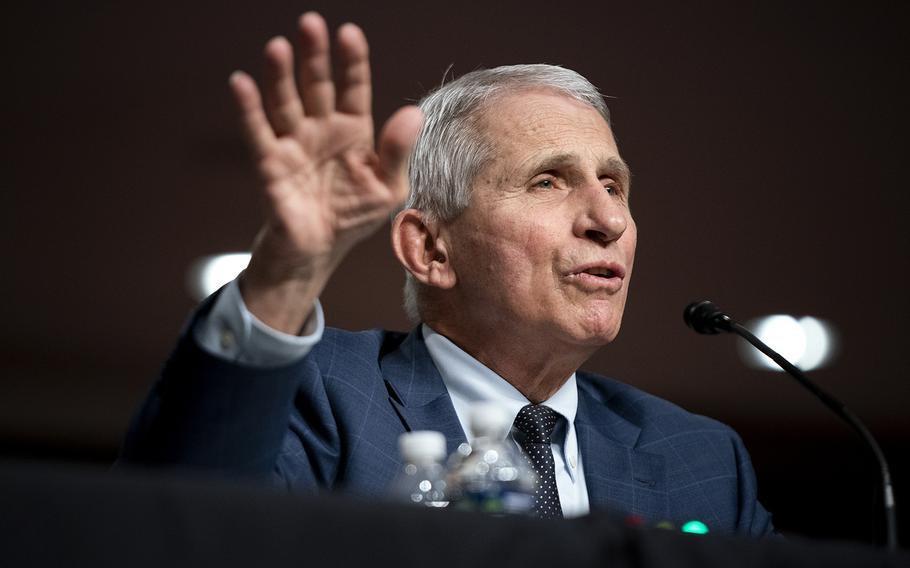 WASHINGTON — The United States is finally “out of the full-blown explosive pandemic phase” that has led to nearly 1 million deaths from covid-19 and more than two years of suffering and hardship, Anthony Fauci, President Joe Biden’s chief medical adviser, said Wednesday.

“We’re really in a transitional phase, from a deceleration of the numbers into hopefully a more controlled phase and endemicity,” Fauci told The Washington Post.

Fauci’s comments came a day after he told PBS’s “NewsHour” that he believed the country is “out of the pandemic phase,” and he expanded on, and clarified, that view Wednesday, making clear that the pandemic is not over and the United States could still see new waves of infections as the virus continues to mutate and spin off highly transmissible variants. But Fauci and other infectious-disease experts are hoping that the population has built up enough immunity from previous infections and vaccinations to avoid another devastating surge in hospitalizations and deaths.

“The world is still in a pandemic. There’s no doubt about that. Don’t anybody get any misinterpretation of that. We are still experiencing a pandemic,” Fauci said.

His comments follow a report from the Centers for Disease Control and Prevention indicating that roughly 3 in 5 people in the United States have already been infected by the coronavirus. About 1 in 4 people had a first-time infection during the winter wave caused by the omicron variant.

These startling numbers suggest the country has a much higher level of collective immunity than it did before omicron. What is far less clear is how long that immunity will persist, and to what extent it could be evaded by new coronavirus variants.

The omicron subvariant BA.2.12.1 is the latest version n to seize the attention of public health experts. It is rapidly gaining traction, and CDC estimated Tuesday that it accounted for about 30% of new infections. CDC director Rochelle Walensky said preliminary estimates suggest it is about 25% more transmissible than the omicron subvariant BA.2, itself more transmissible than the original omicron strain.

The virus’s ability to mutate and work around the human immune system has made experts cautious about predicting the trajectory of the pandemic.

“Not to be gloom and doom, but the central issue is that we do not know whether the virus will spawn new variants capable of eroding the protection from vaccines and therapeutics,” Columbia University epidemiologist Jeffrey Shaman said in an email Wednesday. “Over the coming years, we will gain a better sense of that capacity.”

Fauci’s comments on the end of the “pandemic phase” could easily be misinterpreted, said Andrew Noymer, an epidemiologist at the University of California at Irvine.

“There’s still a lot of moving parts here. I don’t disagree with what Fauci said, but as soon as I heard it, I figured it would be wildly misinterpreted by your average member of the public,” Noymer said.

Fauci took pains Wednesday to explain his thinking. The country has not reached a major milestone, he said. He was pointing out what is clear from the coronavirus trackers in recent months: The country is in a different position than it was previously. He said the United States was in the “full-blown pandemic phase” in the winter, then entered a period he refers to as the “deceleration” phase.

“There’s the full-blown pandemic dynamic, the way we were months ago, where we were having 900,000 cases a day, tens of thousands of hospitalizations, three thousand deaths a day,” he said. “The deaths went from 3,000 down to 300.”

The country is transitioning, he said, to what he calls the “control” phase. That’s where he expects the health emergency to settle down, with the virus still circulating but not causing devastating new waves of hospitalization and death. Asked if the country is in the control phase now, he said not quite yet.

In May 2021, Fauci told The Post he thought the virus could reach the “control” stage by autumn of that year. The delta variant soon rendered that a pipe dream. Before the delta wave had even subsided, omicron came roaring in, sickening tens of millions as 2021 turned into 2022.

The case numbers dropped precipitously for a couple of months but have been ticking upward in recent weeks, driven by the omicron subvariants BA.2 and BA.2.12.1.

Restrictions are easing as many Americans appear to be putting the pandemic behind them. Masking requirements have been lifted across most of the country, and officials stopped enforcing a federal mask mandate in transportation settings after a judge struck down the requirement.

The coronavirus will not be eradicated, Fauci told PBS, but can be handled if its level of spread is kept “very low” and people are “intermittently” vaccinated, though he said he did not know how frequently that would have to happen. And he echoed warnings from the World Health Organization and the United Nations this month that worldwide, the pandemic is far from over as vaccination rates remain too low, particularly in developing nations.

The Biden administration, meanwhile, is appealing a ruling by a Trump-appointed judge that struck down the federal transportation mask mandate, including on planes, though even if successful, the effort would face an American public that could be unwilling to comply again.

Fauci, meanwhile, has decided against going to the White House Correspondents’ Association dinner Saturday, which Biden reportedly plans to attend. Fauci this month attended the Gridiron Dinner, at which scores of people became infected. On Wednesday, he declined to discuss his reasoning for skipping what’s often referred to as the “nerd prom,” saying simply, “It’s just my personal choice.”