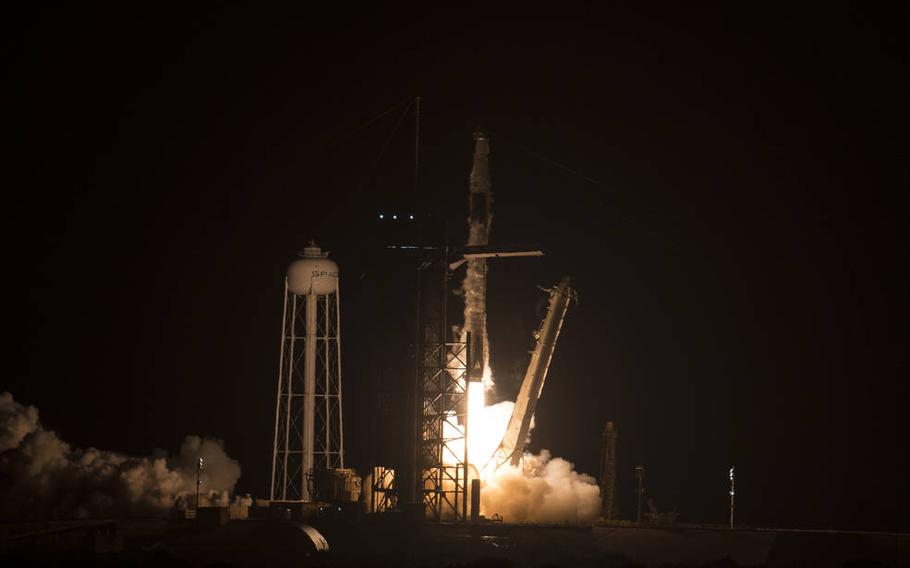 The spacecraft named Freedom lifted off from Launch Pad 39-A at Kennedy Space Center atop a Falcon 9 rocket on Wednesday, April 27, 2022.. (NASA)

The spacecraft named Freedom lifted off from Launch Pad 39-A at 3:52 a.m. atop a Falcon 9 rocket. Its quartet of passengers look to dock with the ISS Wednesday evening around 8:15 p.m.

The three NASA astronauts and one from the European Space Agency donned their spacesuits and made their way to the launch pad just after midnight and strapped into the spacecraft. The crew access arm retracted after 3 a.m. with the capsule’s launch escape system armed.

“A heartfelt thank you to every one of you who made this possible, Now let Falcon roar and Freedom reign,” said NASA’s Crew-4 Commander Kjell Lindgren.

Also flying up are NASA’s Bob Hines and Jessica Watkins as well as the ESA’s Samantha Cristoforetti of Italy. Both Lindgren and Cristoforetti have each flown one time previously, having ridden up to the station on Soyuz spacecraft, while Hines and Watkins are space rookies. Watkins will be the first Black woman to stay long-term on the ISS.

SpaceX was able to once again land the first-stage booster, being used for the fourth time, on its droneship A Shortfall of Gravitas in the Atlantic, and soon after the Crew Dragon separated from the second stage with a stuffed turtle, in deference to the two rookies’ 2017 astronaut class nickname, floating about the cabin acting as its zero-g indicator.

“From Freedom, we want to say a big thank you to SpaceX, the Commercial Crew Program, and specifically the Falcon 9 team for a great ride,” Lindgren said. “It is a privilege to get to fly this new vehicle, the Crew Dragon Freedom to orbit. Huge thanks to the teams that assembled and prepared her for flight. We’re feeling great and we’re looking forward to the view.”

The launch comes less than two days after the landing of the Axiom Space AX-1 crew with its four private astronaut passengers that splashed down Monday afternoon off the coast of Florida in another Crew Dragon.

“We are really in a golden era of space exploration,” said NASA Administrator Bill Nelson on Tuesday. “We’ve seen the first private astronaut mission that has successfully returned. Now a 39-hour turnaround and we’re going to launch Crew-4.”

Crew-4 are headed to the station to relieve Crew-3, which has been orbiting the Earth since November. It’s the fourth operational crew replenishment mission for SpaceX and the seventh with humans for the commercial spacecraft. Crew-4 will join Expedition 67 with a task list of more than 200 science experiments to perform during their stay on board until Crew-5 relieves them in early September.

Crew-3 is slated to leave the ISS on May 4 landing off the Florida coast on day later if weather cooperates.

Freedom is the fourth and final Crew Dragon in SpaceX’s fleet joining original Dragons Endeavour, which just landed with the AX-1 crew, Endurance, which is docked at the ISS waiting to bring Crew-3 home, and Resilience, which last flew on the private Inspiration4 mission in the fall.

Being the newest, Lindgren in a pre-launch press conference said it has some new features such as voice indicators that help detect communication static, but then amid laughter from his crewmates extolled one other feature.

“Our favorite thing though is that we have USB charging ports in the spacecraft,” he said. “This is something that goes to low-Earth orbit and is going to get us to the space station and I’m talking about USB ports. It’s the little things. The next coffee maker.”

From a serious standpoint, though, he said that the crew use tablets for reference material during flight, and so taking away the need to monitor their battery power just helps the overall focus of the mission.

“Those USB ports were a product of the Inspiration4 mission,” he said. “So [SpaceX’s] private missions have fed capabilities into the NASA missions, and again, I think that this just really demonstrates the power and agility of this commercial partnership through the Commercial Crew Program and the benefits that feed back to NASA as a result.”

Each spacecraft has been named by the astronauts that first fly on it, and Lindgren said “Freedom” had several meanings. One is the idea that the Commercial Crew Program has given NASA the freedom to fly from American soil with partner SpaceX, and potentially Boeing in the near future, after nearly a decade of reliance on Russian Soyuz flights needed after the end of the space shuttle program.

The name also pays deference to the Freedom 7 capsule flown by Alan Shepard, the first American in space, during the Mercury program in 1961. One of those Mercury spacecraft is on display at Johnson Space Center in Houston, where the astronauts train.

“To see that, that first launch of Freedom 7 and to see where we are today is really a remarkable thing, and so we wanted to celebrate freedom for a new generation of space flyers,” he said.

Addressing the recent invasion of Ukraine by Russia, though, was also part of the naming drive.

“We want to celebrate what we see as a fundamental human right, and also to celebrate ... what the unfettered human spirit is capable of,” he said.

Despite U.S. and Russia being at odds on Earth, Lindgren said his crew thinks highly of the three Russian cosmonauts currently on board, and with whom they’ve shared training.

“We are certainly not immune to the geopolitical situation right now. These are very challenging times, but this is our job and we’ve been given the privilege of this mission,” he said. “We very much look forward to getting on orbit and working with our Russian colleagues, our friends, up there and having a safe and successful mission and getting everybody back home safely.”

Pilot Hines is excited to get his hands on the new hardware.

“We knew there was a chance we might be on a new vehicle, so we were kind of eyeballing that for a while,” he said. “We have gotten to watch this vehicle from its infancy all the way up to be as I say a somewhat mature baby Dragon now. And so it’s been really special to see. It’s truly an honor to get to pilot it and be part of this amazing crew that gets to fly on it for the first time.”