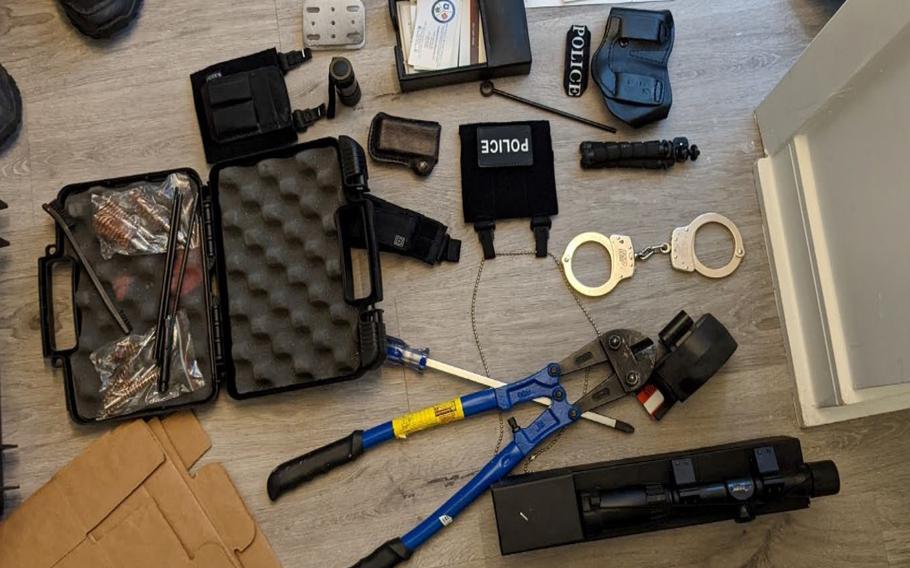 Prosecutors say this photo shows items from the apartment of Arian Taherzadeh including a rifle scope, tactical gear and storage equipment, clothing and patches with police insignias, handcuffs, breaching equipment, and a cleaning kit for firearms. ()

The two men accused of posing as Department of Homeland Security employees while living inside a luxury apartment in the Navy Yard neighborhood of Washington, D.C., pleaded not guilty Tuesday to charges of impersonating federal law enforcement and unlawful possession of a gun magazine that holds bullets.

Arian Taherzadeh, 40, and Haider Ali, 35, were indicted by a grand jury in federal court April 19 after an investigation uncovered what prosecutors allege was an elaborate scheme that involved the men pretending to be federal agents while cozying up to real members of the U.S. Secret Service. Their defense attorneys in hearings and court filings have denied a plot to infiltrate the intelligence agency, saying Taherzadeh acted out of a "desire for friendship," while Ali believed he was working for a legitimate security company.

Since the FBI arrested the men in early April, prosecutors have scrambled to understand the scope of the alleged ruse that unfolded inside the Crossing apartment complex. They have accused the men of ingratiating themselves with members of the Secret Service assigned to protect the White House and first lady Jill Biden, saying the "defendants were not merely playing dress-up" and "created a potential risk to national security."

Taherzadeh, according to an FBI affidavit filed in U.S. District Court in D.C., provided members of the Secret Service and an employee of DHS with items that included "rent-free apartments (with a total yearly rent of over $40,000 per apartment), iPhones, surveillance systems, a drone, a flat screen television, a case for storing an assault rifle, a generator, and law enforcement paraphernalia."

Prosecutors have said the men proudly advertised their affiliation with the Department of Homeland Security when they in fact worked for a purported security company, run by Taherzadeh, named the United States Special Police. Taherzadeh later admitted to law enforcement that his company's name was an "embarrassing misrepresentation that got out of control," according to court documents filed by his defense.

The next court hearing for the men is scheduled for June 28.