An Army medic assigned to 1st Battalion, 503rd Infantry Regiment, 173rd Airborne Brigade, swabs a soldier for COVID-19 at Hohenfels Training Area, Germany, Aug. 20, 2020. Long before vaccines were available, the 173rd Airborne Brigade deployed thousands of paratroopers for a six-week exercise in Germany without suffering a single case by testing all participants before deploying, during the exercise and a third time before redeploying. (Ryan Lucas/U.S. Army)

A major lapse in precautions led to a COVID-19 outbreak last year that ravaged a Joint Base Lewis-McChord Army battalion and demonstrated how the illness could rapidly degrade readiness, according to a recent report in the military’s monthly medical journal.

In February 2021, more than 140 soldiers in an unspecified infantry battalion became infected after a training exercise at a facility near Yakima, Wash., an article in the January issue of Medical Surveillance Monthly Report said.

The article was only recently posted online following months of delay affecting the December, January and February issues.

It faulted the unit for a complete lack of predeployment testing before the roughly two-week training. 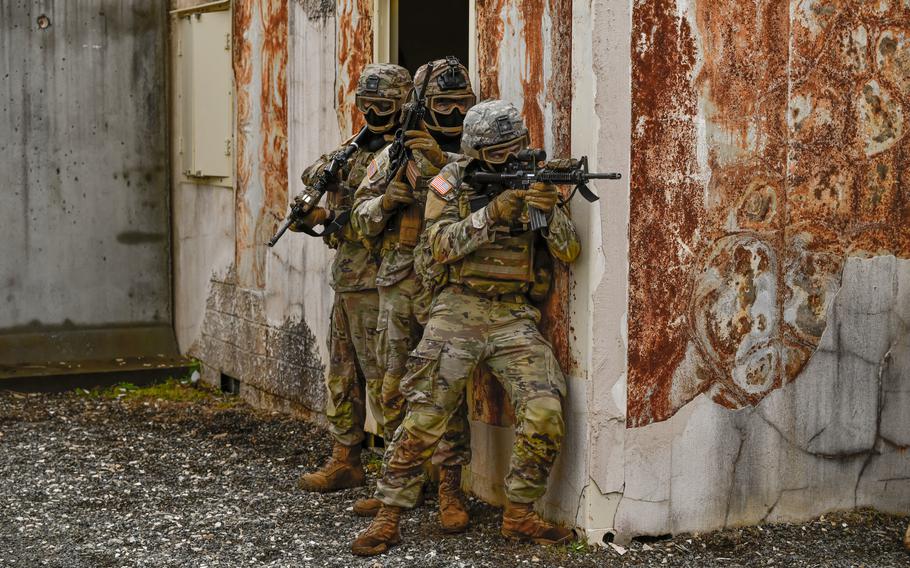 Soldiers train at Joint Base Lewis-McChord, Wash., on Feb. 10, 2022. A year earlier, more than 140 soldiers in an unspecified infantry battalion at the base became infected with COVID-19, hampering the unit's readiness, according to a report in a military medical journal. (Jeffrey Beggs/U.S. Army)

Shortly after returning to the Tacoma-area base, soldiers began reporting symptoms of COVID-19, which testing revealed was of the highly transmissible and potentially virulent beta variant.

Medical authorities had to launch an expansive testing and contact tracing effort that resulted in quarantines for scores of people.

The article did not identify which of several infantry battalions at the installation was involved, and base officials declined to do so or say whether unit leaders had faced repercussions. They referred the matter to a spokesman for Madigan Army Medical Center.

Madigan spokesman Jay Ebbeson said in an email that “no serious illness developed” among the infected soldiers.

Other decisions in the wake of the failure to test for infections contributed to the outbreak, according to the article. Because the weather grew colder than expected, soldiers slept close together in an unventilated airplane hangar, it said.

And the soldier later identified as the first case reported during the training that he had a fever and chills late into the exercise, but wasn’t evaluated for COVID-19.

“The soldier was rehydrated and was promptly returned to duty where he resumed normal training activities for the next 3 days among other soldiers, including sleeping in the enclosed hangar,” the article said.

When the exercise ended early for undisclosed reasons, the soldiers sat close together on buses for the hourslong return trip to base.

The report said that 142 coronavirus cases came from the single battalion, meaning that 23.8% of its soldiers were infected. A total of 164 people involved tested positive between Feb. 14 and March 5, all but one of them soldiers. Two medics at the exercise who had been vaccinated did not become infected, the article noted.

The actions of the unidentified battalion stand in marked contrast to what some other units have done to prevent the spread of the virus.

For example, the Vicenza, Italy-based 173rd Airborne Brigade in 2020 deployed thousands of paratroopers from Italy to a six-week exercise in Germany, and commanders were intent on avoiding a single case of the virus.

The effort succeeded, largely because of lab testing of all participants before deployment, then again during the exercise and a third time before redeployment to ensure that no one was positive.

“Going into an exercise clean and coming out clean has kept the numbers to zero,” Lt. Col. Chris Forster, a brigade surgeon, said at the time. “It proves that the Army can continue to train and to maintain their combat readiness even in a COVID environment.”

The February 2021 outbreak at Joint Base Lewis-McChord was contained by March 5 due to intensive contact tracing, testing and command-implemented isolation and quarantine, the report said.

“As a result of this outbreak, the leadership of the training base has implemented a screening protocol for members of units undergoing training activities,” it said.