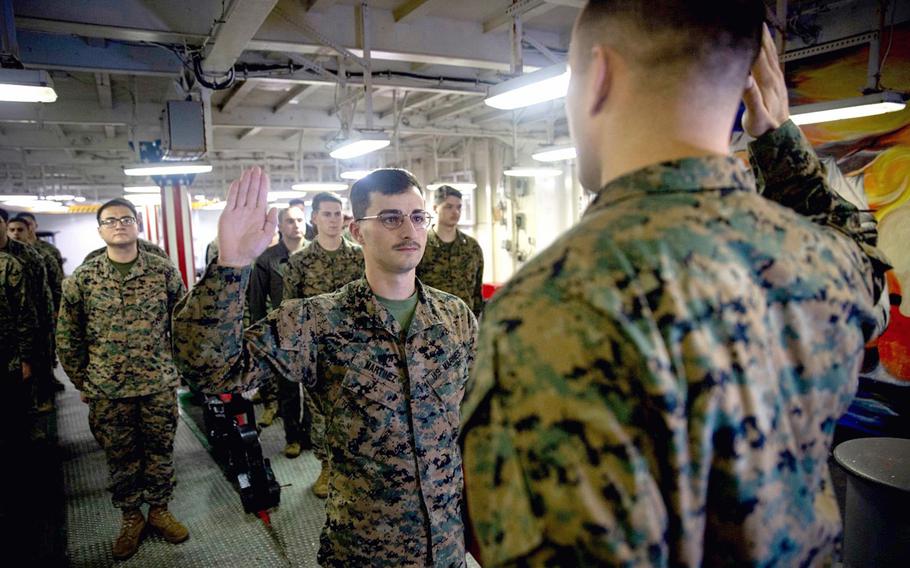 Together, Hannah Cvancara and Joshua Martinez fall into at least three of the 30 categories of medical conditions that disqualify potential candidates from service in the U.S. armed forces.

Cvancara, 26, of Spokane, Wash., was born with fibula hemimelia, a condition that prevented the bones in her legs, ankle and foot from growing with her body. She lost her left leg and walks with a prosthetic.

Martinez, 22, of Gainesville, Ga., survived brain cancer as a child but lives with autism. He said that from the start few people expected much from him.

For both, however, military service beckoned. They sought the opportunity to prove themselves capable and to prove the naysayers wrong.

“I have this duty to serve,” Cvancara told Stars and Stripes by phone Feb. 16, “and I don’t want the fact that my leg is going to stop me, because I am already doing what I would be doing in the Navy.”

Defense Department regulations rule out military service for a range of medical conditions, from deformed eyelids to malignant tumors to a history of frostbite.

But the way is not completely barred. The DOD will waive any of those conditions, provided the applicant justifies the waiver with medical documentation or mitigating circumstances. Martinez satisfied that requirement and today enjoys a successful career as a Marine on Okinawa.

Cvancara, an orthopedic nurse and the daughter of a former Air Force flight surgeon, played seven sports growing up and still likes to hike, run and swim.

But one goal eludes her. The Navy turned down her application to become a commissioned nurse in 2017. She tried again in March 2021 and a year later was still waiting on a decision.

Since the wars in Iraq and Afghanistan, more service members, primarily in the Army, have continued serving despite losing limbs. But starting a military career with such a disability appears to be a higher bar. 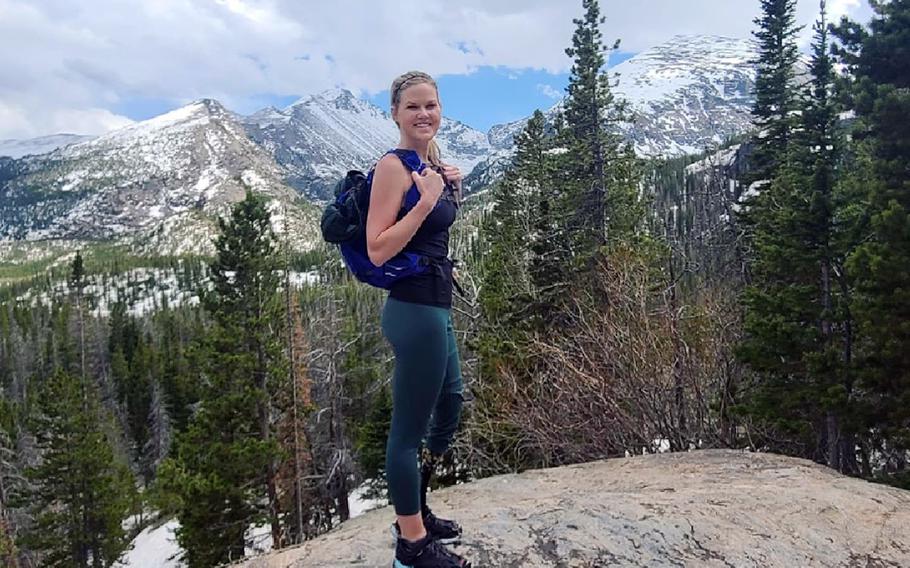 Hannah Cvancara, 26, of Spokane, Wash., was born with fibula hemimelia, a condition that prevented the bones in her legs, ankle and foot from growing with her body. She lost her left leg and walks with a prosthetic. (Hannah Cvancara)

“A commissioned officer in the medical field is required to be physically capable of working in a demanding hospital environment,” Angela Steadman, spokeswoman for the Navy Bureau of Medicine and Surgery, told Stars and Stripes by email March 30.

That environment requires prolonged standing and heavy lifting aboard a naval vessel, she said. It also involves climbing ladder wells, moving in tight quarters and walking on uneven surfaces.

“I don’t want there to be accommodation to the mental or physical standards,” she said. “But people with disabilities that can meet those standards should be able to have a chance.”

On Okinawa, Marine Sgt. Joshua Martinez, 22, is training for a new role in defensive cyber operations. Before arriving at Camp Hansen, he was a network administrator aboard the amphibious assault ship USS America, homeported at Sasebo Naval Base, Japan.

Marine of the Quarter three times and Noncommissioned Officer of the Quarter once, Martinez as a lance corporal was chief of networking for Marines in Thailand, South Korea and the Philippines, according to the Marine Corps.

At age 4, Martinez was diagnosed with brain cancer, he said. Chemotherapy failed, but neurosurgery saved him. 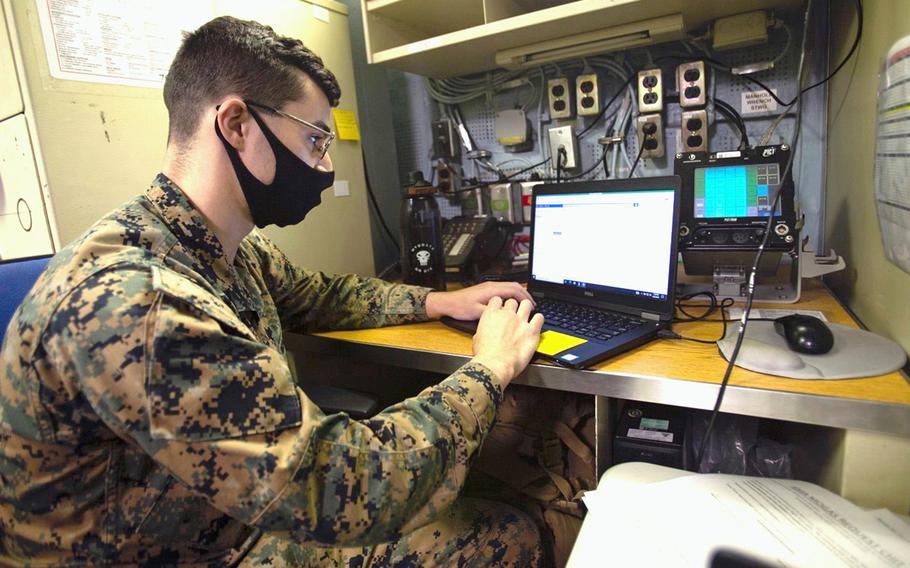 After that, Martinez said, very few people outside of his family expected much from him. One teacher even told him that he’d never graduate high school.

Despite that, Martinez set out to join the Marine Corps. Among other requirements, he had to undergo a year of psychological evaluation and track down the neurosurgeon who operated on him as a child to confirm that Martinez’s childhood cancer would not interfere with his ability to perform as a Marine.

“It was pretty arduous,” he said. “And it was difficult, because to get those medical records all the way back from 2001 or so, we needed to provide so many different types of identification and proof.”

Military life tends to agree with autistic people, who are typically focused and hardworking, said Arzu Forough, the president and CEO of Washington Autism Alliance. Her late son, Darian, was autistic and served in the Army National Guard, she told Stars and Stripes by phone Thursday.

“The structure of military life — the predictability and the fact that expectations are very clear — is a really, really good thing for a person on the spectrum,” she said. “They thrive in that type of structure. The more predictable things are, the better they thrive.”

Martinez said that becoming a Marine profoundly changed his life, especially his ability to communicate and pick up on social cues.

“I feel like I’m more of a normal person now because of my interactions with Marines,” he said.

As March wound down, Cvancara anticipated the Navy’s response to her second try at becoming a commissioned nurse. She ran down the list of things she said makes her a good candidate.

“I got my nursing license on my own dime,” she said, by earning a bachelor’s in nursing at National University, San Diego, in 2019.

“I’ve had six surgeries throughout my life, all on my leg,” she said. “I’ve gone through a lot of my life being a patient and I think if I join, I will have a lot of empathy to give back in the future with all my patient experience.” 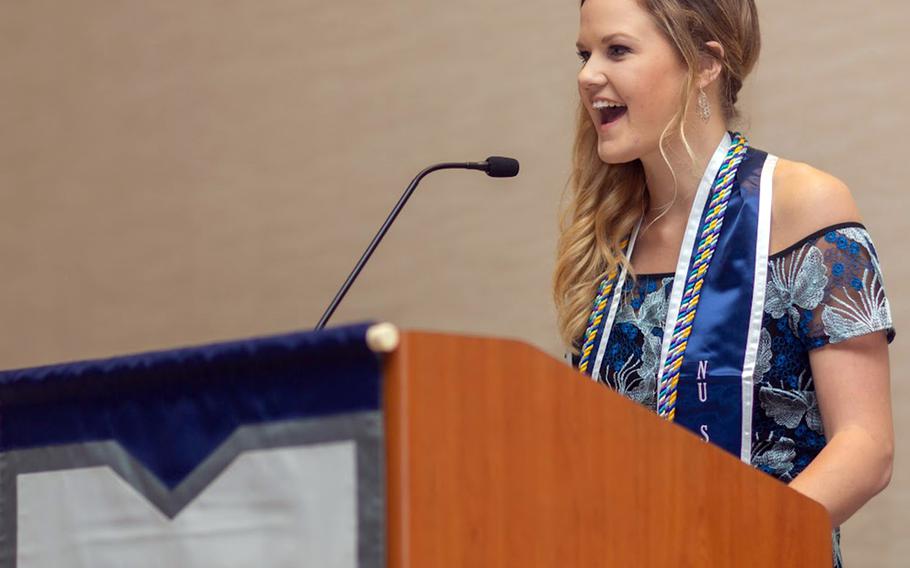 Hannah Cvancara, 26, of Spokane, Wash., lost her left leg and walks with a prosthetic. The Navy has turned down her application to become a commissioned nurse. (Hannah Cvancara)

The Navy denied her application on March 30 without explanation, Cvancara said. She said she would appeal that decision.

Though disappointed, she continues to advocate for herself, and others like her. Cvancara traveled April 5 and 6 to Washington, D.C., with members of the American Orthotic and Prosthetic Association and her employer, the Evergreen Prosthetics and Orthotics clinic in Spokane, she said.

They talked to members of Congress about reforming disability standards in the military.

“My fight is far from over, in one way or another,” Cvancara said. “I know I will never stop advocating for myself and for the disabled community for the chance to fulfill their passion.”