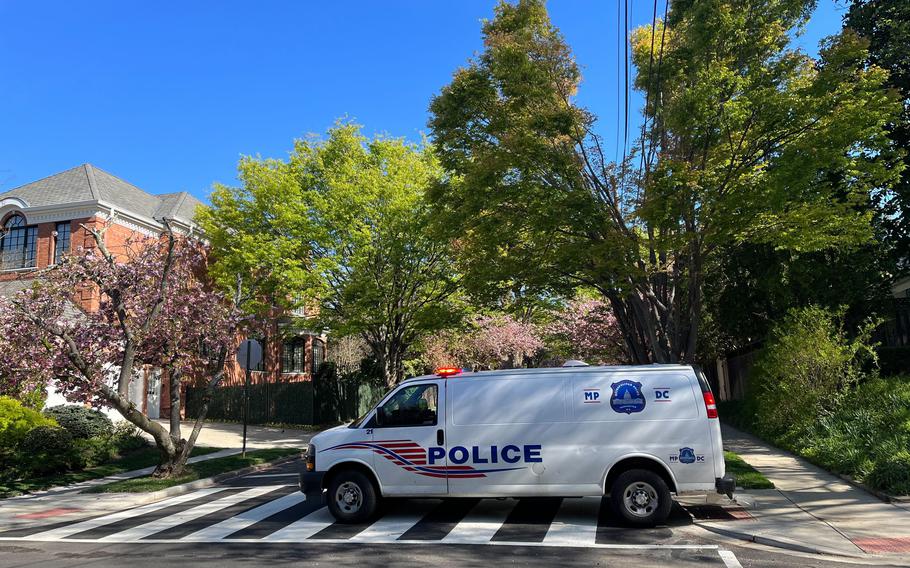 WASHINGTON — Two uniformed officers with the U.S. Secret Service fatally shot a man Wednesday during an apparent confrontation with an intruder at the Peruvian ambassador's residence in Northwest Washington, D.C., police said.

Authorities said they believe the man had shattered windows at the secluded residence west of Rock Creek Park and was holding a metal stake as he approached officers who had been called by members of the ambassador's family after they heard glass breaking.

D.C. Police Chief Robert J. Contee III said the officers tried to subdue the man with stun guns. When that failed to stop him, Contee said, the officers shot him using their service weapons.

The man, whose identity has not been released, died at the scene. Contee said an initial investigation showed no known connection between the man and the embassy, and police did not know if he had targeted the building or the people inside.

"This is totally out of the ordinary," the chief said.

The incident occurred shortly before 8 a.m. and sent Secret Service officers and D.C. police racing to the gated residence in the 3000 block of Garrison Street NW, in the Forest Hills neighborhood.

Contee said members of the ambassador's family had called the Secret Service, responsible for security and patrols at foreign embassies and their properties, to report a burglary in progress.

The police chief said the Secret Service officers "located an individual who was in the rear of the ambassador's residence. They learned this individual had smashed out several windows."

The grounds encompass about three acres a half mile east of Connecticut Avenue, in woods bracketed by Broad Branch Road. Officials said the large house is surrounded by a fence, but the gate to its long driveway is open. The Embassy of Peru is located near Dupont Circle.

Police said the ambassador and his wife were home at the time of the attack. Peruvian officials could not be reached for comment on Wednesday; though the Embassy of Peru tweeted: "The Ambassador, his family, the Residential staff, and the secret service agents are safe."

Police said the man was described as someone in his late 20s to early 30s. Contee said it was unclear if he got inside the building. The embassy tweeted he had "entered the official residence without authorization."

Wednesday's shooting is being investigated by D.C. police, which examine all fatal shootings by law enforcement in the District. The federal officers who fired were not identified.

Police have not said how many times the officers fired or where on the body the man was struck.