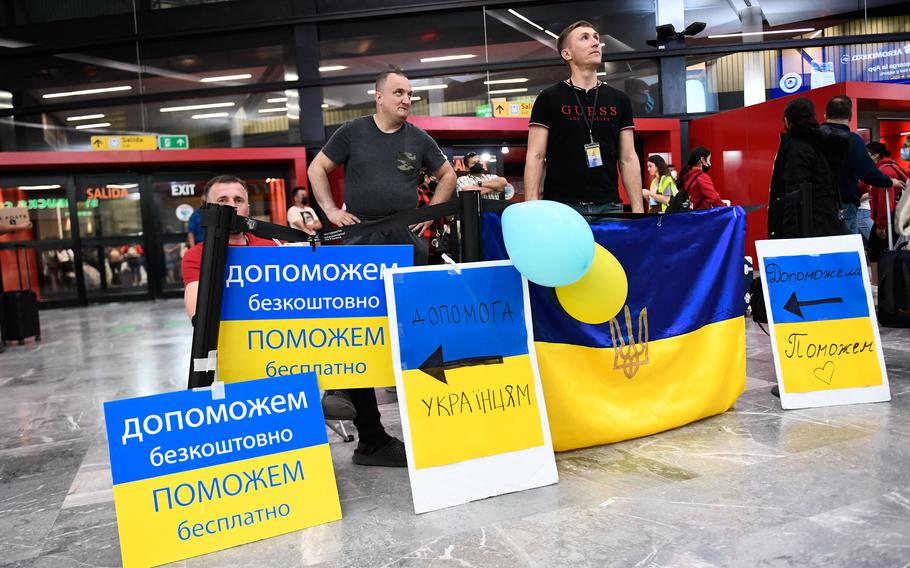 Volunteers with signs welcome Ukrainian refugees as they arrive at the Tijuana airport to help them on their journey to the United States after fleeing the war in Ukraine, in Tijuana, Mexico, on on April 8, 2022. (Patrick T. Fallon/AFP)

WASHINGTON — The Biden administration announced a regulatory change Monday that will make more Ukrainians eligible for temporary protected status in the United States.

Ukrainians who entered the U.S. by April 11 are eligible to apply for 18 months of deportation protection and work authorization, according to a Federal Register notice.

That expands the window by more than a month. When the TPS designation was initially announced in early March, the qualifying date was March 1.

Thousands more Ukrainians who arrived in the U.S. in recent weeks are eligible under the new notice, including roughly 10,000 who claimed asylum at the U.S.-Mexico border after first arriving in Mexico on tourist visas.

Lawmakers and advocates had pressed the administration to tweak the TPS qualifying date as part of a wider effort to reduce immigration barriers for Ukrainians fleeing the war. Although the majority of Ukrainian refugees are expected to remain in Europe with the hope of returning to Ukraine when the conflict is over, many with relatives in the U.S. have sought refuge here.

“This technical update could provide significant relief for Ukrainians who recently entered, as they cannot — and should not — return to a war zone right now,” dozens of other lawmakers wrote to the White House in an April 6 letter led by Reps. Lloyd Doggett, D-Texas, and Andy Harris, R-Md.

Approximately 59,600 individuals will be eligible for TPS under the designation, the Department of Homeland Security said.

The new notice comes as details remain murky on a Biden administration plan to welcome 100,000 Ukrainian refugees following the Russian invasion of Ukraine. More than 4 million people have fled Ukraine since the conflict began, according to United Nations estimates.

The administration vowed to use a “full range of legal pathways” to resettle Ukrainians — likely a combination of expedited immigration visa processing, traditional refugee admissions and other mechanisms — but specific plans have not yet been announced.