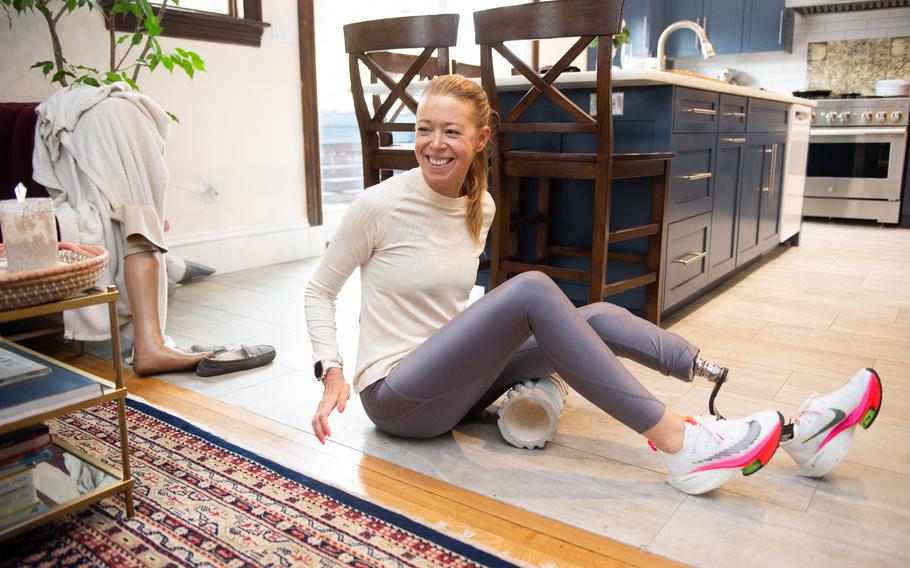 Adrianne Haslet rolls on a foam pad after her training run in Allston, Massachusetts on April 8, 2022. (Kathryn Riley for The Washington Post)

On Monday morning, Adrianne Haslet will step to the starting line in the Para Division at the Boston Marathon, ready to begin another 26.2-mile journey that will end at the spot where, nine years ago, she lost her left foot and very nearly her life.

April, carrying as it does the anniversary of the marathon bombing, is an especially cruel month for Haslet, who knows full well the emotional baggage that running 26.2 miles carries. A ballroom dancer when the bombing occurred, Haslet most often uses the word "gratitude" to describe her state of being after first overcoming the loss of her leg and then severe arm injuries suffered in 2019, when she was struck by a car as she crossed a street.

"I just feel incredibly grateful that I was able to still be alive in the moment and to be able to see the people I love again and to now walk and run and dance and still participate in everyday life and meet amazing people," she said in a phone interview. "I just am super, super grateful. It's never lost on me that I almost lost my life. It's front and center of my brain every day, almost every minute, and not in a creepy, morbid way, but I'm just overflowing with gratitude."

Haslet's gratitude doesn't gloss over the difficulties she's faced on the road to the marathon's Hopkinton, Mass. starting line.

"One of the things that's really common is to wake up one day and have that little check mark of, 'Hey, you're all better now. Congratulations. Everything's fine, right?' " she said. "And we want that because that would be an easy fix and the easy button, but that's not how life works, and I definitely make room for that trauma that is still part of me.

"I have bouts of real sadness of missing my leg - that shock that happens every April. It happens outside of April, but it always happens in April. And that's really hard. To steal a running metaphor, we have bad runs and they're terrible and we think 'I could never do the marathon. This is awful and I could never. I'm so embarrassed. That's such a terrible run.' And then the next day, we crush it on like a run double as long and feel amazing. . . .

"My only goal since finally realizing and accepting that little check mark will never come is to have more good days than bad and to really, really relish the gratitude I have training for the Boston Marathon. . . . Like, how stinking amazing is that?"

Haslet was a young woman more aware of Ginger Rodgers than Joan Benoit Samuelson or Shalane Flanagan on that 2013 day when she walked to Boylston Street in Boston's Back Bay to see the spectacle of the marathon finish. She had grown up in the Seattle area and wondered "why on earth" anyone would run that far.

Her steps took her close to the finish line when the first explosion occurred. When the second hit, "I was on the ground and I saw my foot was gone immediately. During the [bombers'] trial, I saw footage of myself walking along that same route and the monster, whose name I never say, and I were almost shoulder to shoulder. He dropped the backpack and looked toward me and others and walked away."

That was the beginning of her unlikely journey into running. Her brothers had run the race in 2014 and a friendship with Flanagan, the four-time Olympian who won the 2017 New York City Marathon, began that year. By 2016, Haslet, who herself had taken it up to challenge herself, was ready to try the race, which she finished last, in 10 hours, 30.23 seconds.

"For someone who was competitive and always likes to be first," she said, "it was the best and most humbling and most awesome thing to come in dead last. I would never change that moment for anything because I learned so much." Barack Obama tweeted, "Thank you, Adrianne, for being Boston Strong. Terror and bombs can't beat us. We carry on. We finish the race!" Tom Brady called her "an inspiration" in a Facebook post. 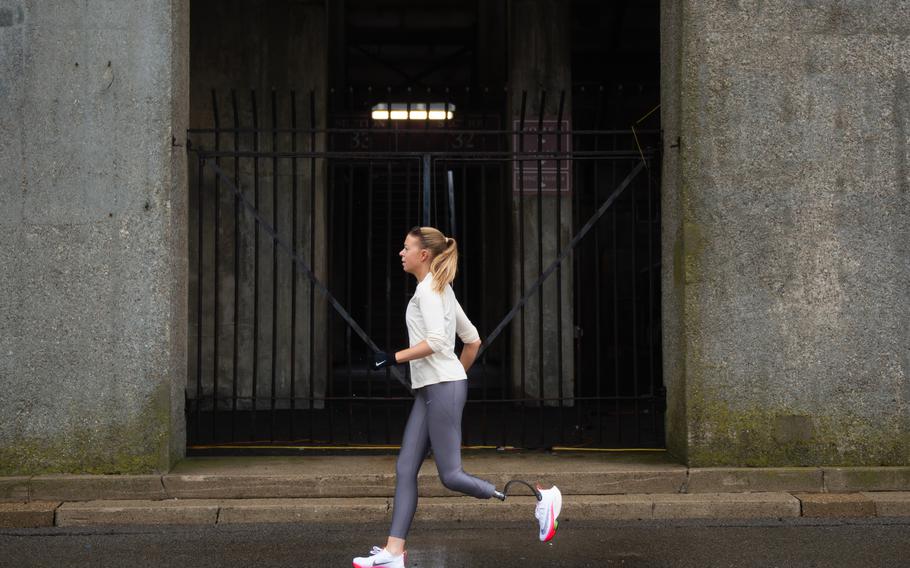 Adrianne Haslet runs in preparation for the Boston Marathon in Allston, Mass., on April 8, 2022. (Kathryn Riley for The Washington Post )

She tried again in 2018, only to have to stop because of a cold monsoon that one organizer likened to a wintry carwash. Then, in January 2019, she experienced trauma again when she was struck by a car while near Boston's Commonwealth and Hereford streets, another emotional landmark for her on the marathon's route.

"I had the right of way and I had the crosswalk sign and someone without lights was going about 40 miles an hour and they struck on my left leg. Because their bumper hit carbon fiber in my prosthetic leg, I flew almost four car lengths."

She landed on her left side, crushing her arm. "I'm actually more disabled in my left arm by being hit by that car than I ever was by a terrorist," she said. "That was debilitating to me. I couldn't wear my leg because I only had one arm to use to get it on. I still can't twist my arm and my elbow over my shoulder and a bunch of different ways."

She lost the chance to run the race that year and in 2020, when it was canceled because of the coronavirus pandemic. When the 2021 race was moved to the fall because of the pandemic, she was ready - only to roll her ankle. Haslet then focused on 2022, when the race returned to its traditional spot on the April calendar.

Partly because of Haslet's advocacy, Boston for the second time will feature a Para Division and 34 athletes have entered. Previously, Para athletes ran in a special wave. Haslet hopes one day to run in the Paralympics, should the marathon be added to its events, and Boston is a hopeful step. Training her is Flanagan, a friend and a runner who proved last fall that, although "retired" from pro running, she could run all six of the World Marathon Majors in six weeks. Haslet and Flanagan first met after the 2014 Boston Marathon and they bonded over the years. Flanagan, who grew up in Marblehead, Mass., and coaches the Bowerman Track Club in Oregon, "took the reins" as Haslet's trainer, and will be her support runner in Boston.

"There's a good reason to run and this is a great reason," said Flanagan, who worked with Haslet in Oregon and Massachusetts. "Anyone who's just passionate about something is - it's worth working with them, and I could tell her enthusiasm. It was just such a beautiful full circle moment, someone who as a result of watching the marathon lost her leg and now is actually helping create a Para Division. I thought that was the most incredible story, and for me, it was a big goal to be part of it because I think she can inspire so many people."

Flanagan has helped to refine Haslet's running form. "She was carrying her left arm as if it was still injured," Flanagan said. "To increase a range of motion is limited, but it's amazing how the mind and the body work. As soon as I just said, 'Adrianne, you've got to continuously move the arm differently,' she was able to do that. There've been a lot of improvements, and I think she'll be the best version of Adrianne running in Boston."

Flanagan changed Haslet's approach to running gear, too. The sleeve that covers her left thigh and prosthesis leg kept slipping when she became sweaty, causing her to stop to adjust it. Flanagan, helped by her relationship with Nike, came up with solutions - tacky spray and tape as well as a gator.

Through therapy, Haslet has learned to assess the sources of her feelings, helping her "to pass through them without riding the wave of every emotion that can come with this kind of tragedy. I recognize that the anniversary of the bombing is always going to be right around the time when I need to be my strongest for it."

For both Haslet and Flanagan there's a "full circle" aspect to this marathon, brought home when Haslet took Flanagan to the spot where she lost her leg and Flanagan flashed back to it being close to where she'd watched the race as a young girl.

"Here I was the fan inspired by the marathon as a little girl watching my dad and then to think, you know, here she was a fan as well and lost her leg, and now she's coming back. She never was a runner, and now she's running the marathon," Flanagan said.

Team Haslet also includes her boyfriend, Harry Mattison, and her service Labradoodle, Fred. Others who have helped her include families who lost loved ones on Sept. 11 and visited Boston to share their experiences shortly after the bombings. They helped Haslet learn that resilience is a complex matter.

"For those of us that have actually been through [trauma], it's the Tuesday night when we smell something or it's the time when I burned my hair in a curling iron that I remember what it was like to lay on that sidewalk and have my hair on fire," Haslet said. "Or it's the Wednesday afternoon when you need to pee and get up and you can't get your leg on in the time that you want to."

Last month, she posted a photo on Instagram from "before," when she was wearing a miniskirt, and an "after" shot of her strong and running, with her blade prosthesis, writing that April "is the month my body remembers."

"I sometimes see photos of myself in with two feet and in all of my dresses and all that ballroom gear and it's tough," she said. "Sometimes I'll see some girl in a mini skirt and think like, 'Damn, I can't' - you know, of course, I can wear it, but you know, it's very different and as someone who used my feet as my job, it's tough.

"But I'm grateful to have traded two hours of getting ready [to go out] to no shower and being sweaty in public [as a runner]. That's a much healthier place to be. So I'm grateful for that, and I'm grateful to running for showing me what my body can still do. I know that's a beautiful thing."