Yellen challenges China in ‘moment for choosing’ on world order 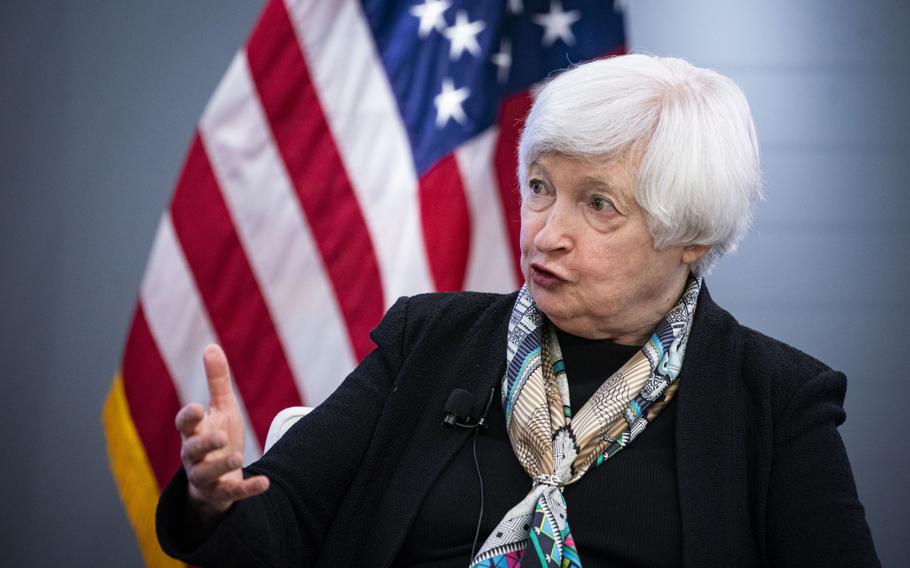 Janet Yellen, U.S. Treasury secretary, speaks during an event at the Atlantic Council in Washington, D.C., on April 13, 2022. (Al Drago/Bloomberg)

Treasury Secretary Janet Yellen has sketched out her vision for a new era of economic cooperation among nations that share key values and principles, in a sweeping speech that laid down a stern challenge to China.

Yellen, speaking a week before global finance chiefs meet in Washington, called Beijing to account for its ever-closer relationship with Moscow and blasted China for practices that “unfairly damage” the national-security interests of others. She alluded to the use of market positions -- China is a key provider of crucial rare-earth metals -- for “geopolitical leverage.”

While she said she didn’t want the evolution of a “bipolar” global system between U.S.-led and China-led elements, the Treasury chief said that Russia’s invasion of Ukraine marked a moment where nations need to decide where they sit. “The future of our international order, both for peaceful security and economic prosperity, is at stake,” she said.

“The key section for me was the ‘fence-sitting’ section calling out China -- that they should not be helping Russia economically in this moment,” said Josh Lipsky, director of the GeoEconomics Center at the Atlantic Council, where Yellen spoke. It was “an implicit warning to other countries, who are unnamed in the speech, that this is a moment for choosing.”

Yellen laid out a number of proposals or warnings without detailing specifically what Washington is seeking:

- “Modernize” the approach to trade integration that deepens economic efficiences but protects workers and favors “friend-shoring” -- where supply chains are made up of “trusted” countries.

- Potentially revamp the governance of the International Monetary Fund “to ensure that it reflects both the current global economy and also members’ commitments to the IMF’s underlying principles and objectives.”

- “Revisit our strategies, policies, and institutions to better mobilize capital in support of people in developing countries,” where funding needs are seen in the trillions of dollars, not billions. Private capital can be better mobilized, in a world so “awash” with savings that interest rates have been dropping for decades

The Treasury chief didn’t pledge any specific new U.S.-led financial assistance commitments or trade negotiations. That would require the backing of Congress, amid an increasing focus on reducing fiscal deficits while expanding defense spending.

The Biden administration has consistently spoken about confronting the challenge of a rising China, and demonstrating that democracies can follow through on grand economic and social visions -- as Chinese President Xi Jinping extolls an alternative, authoritarian model.

Yellen’s speech marked another attempt to show renewed American leadership on the international stage, said Martin Muhleisen, a former director of the IMF’s strategy, policy and review department. The push would likely be welcome, but other governments may also be wary about how long such leadership might last, he said.

“The United States will need to reassure its partners that its policies will remain constant even after the fall elections and the presidential elections” in 2024, Muhleisen said.

While the European Union, Japan, Australia and others have aligned with the U.S. in joining sanctions against Russia for its Ukraine invasion, key nations have remained largely neutral -- including India. Indonesia, the world’s fourth most-populous nation, said in late March it planned to invite Russian President Vladimir Putin to a Group of 20 summit later this year.

Yellen defended the U.S.-led sanctions, and rebutted any criticism that the efforts led by Washington to isolate Russia from the dollar-based global financial system were “motivated by any one country’s foreign-policy objectives.”

Russia “predestined an exit from the global financial system” when it decided to invade Ukraine, she said.

As for China, Yellen said, “it will be increasingly difficult to separate economic issues from broader considerations of national interest, including national security. The world’s attitude towards China and its willingness to embrace further economic integration may well be affected by China’s reaction to our call for resolute action on Russia.”

Former IMF board member Douglas Rediker, who is also founder of political-consultancy firm International Capital Strategies, said the language on China and on national economic-security considerations “was a huge evolution on the part of Treasury.”

The remarks come a week before the annual spring gathering of global finance chiefs in Washington for meetings hosted by the IMF and World Bank -- known as the Bretton Woods institutions, set up in the 1940s to help build a stable global economy after World War II.

Yellen’s timing was deliberate, not only because of the coming meetings, but also for her proposal to modernize the international financial institutions so they are better able to respond to modern global crises.

“The new Bretton Woods won’t be built overnight,” said Lipsky. “But I think she was saying that we should have that ambition.”