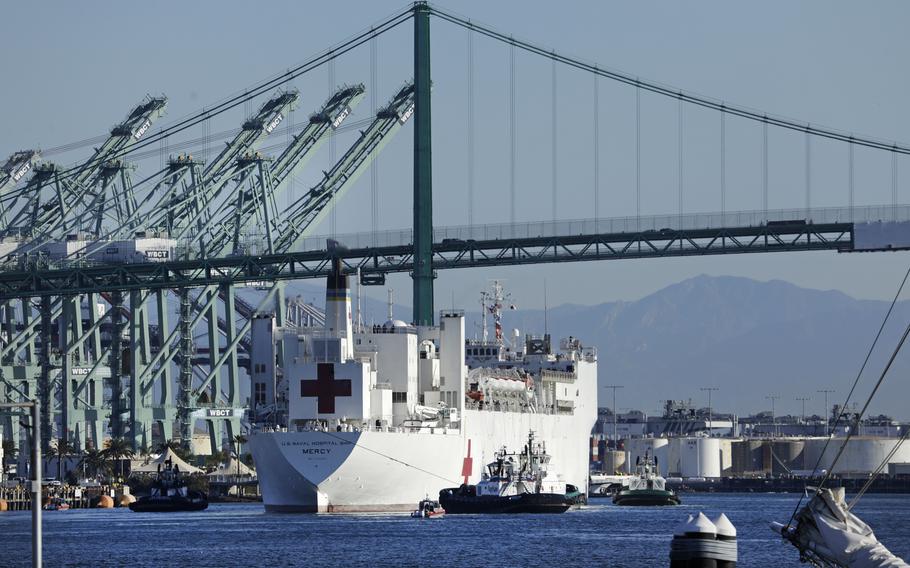 The U.S. Navy hospital ship Mercy arrives at the Port of Los Angeles in March 2020 to serve as a relief valve for hospitals overburdened by the COVID-19 pandemic. (Carolyn Cole/Los Angeles Times)

LOS ANGELES (Tribune News Service) — A former train engineer at the Port of Los Angeles was sentenced to three years in federal prison for intentionally derailing a locomotive near the U.S. Navy hospital ship Mercy in 2020, prosecutors said.

Eduardo Moreno, 46, pleaded guilty in December to committing a terrorist attack and other violence against railroad carriers and mass transportation systems in connection with the incident, which came as the Mercy was docked in L.A. to relieve healthcare systems strained by skyrocketing COVID-19 cases in the early weeks of the pandemic.

In addition to his prison sentence, Moreno was ordered to pay over $755,000 in restitution for the damage caused by the derailment, according to the U.S. attorney’s office for the Central District of California.

On March 31, 2020, Moreno drove the train off the tracks at high speed, crashing through barriers before it came to a stop 250 yards from the Mercy. The ship was not damaged, and no injuries were reported, although the incident caused a diesel fuel leak of approximately 2,000 gallons.

A California Highway Patrol officer saw the crash and detained Moreno at the scene.

The Mercy had docked in the Port of L.A. a week before the crash. With 1,000 beds, the ship was meant to take patients who did not have COVID-19 to ease the burden of Los Angeles County hospitals that had quickly reached capacity.

Moreno told Los Angeles Port Police that he had caused the derailment because he was suspicious of the Mercy and believed it was docked for a “government takeover,” not pandemic assistance, the U.S. attorney’s office said.

Moreno said that he had acted alone and that the act was not premeditated. At the time of the crash, he was an employee of Pacific Harbor Line, which operates in the L.A. and Long Beach port complex.

“While admitting to intentionally derailing and crashing the train, he said he knew it would bring media attention and ‘people could see for themselves,’ referring to the Mercy,” the U.S. attorney’s office said.

Seven weeks after arriving in Los Angeles, the Mercy left to return to its home port in San Diego, having treated only 77 patients.