FBI wants to stay in Washington, but Congress already has said goodbye 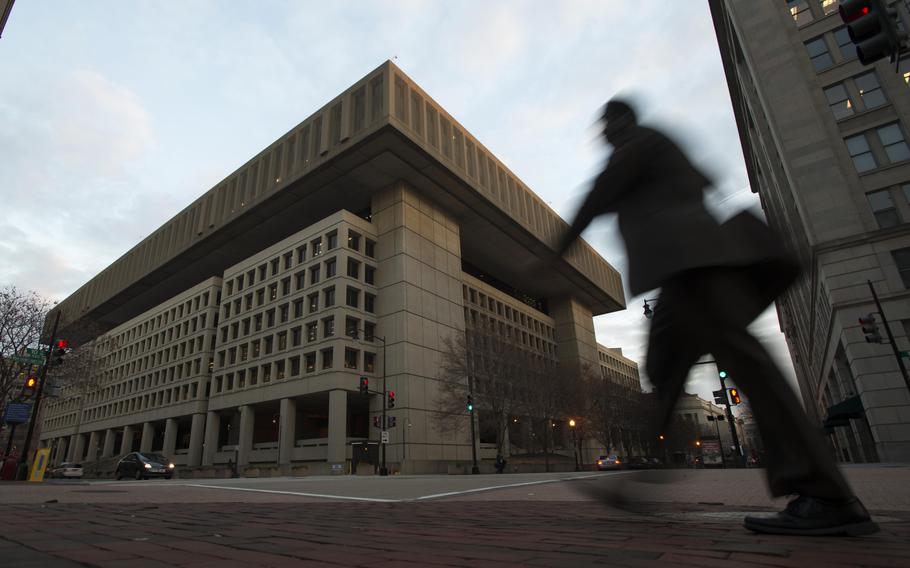 WASHINGTON — FBI leaders have been vocal in recent years about their desire to keep the agency’s headquarters in the nation’s capital, where they have quick access to the Department of Justice and stand as a public-facing symbol of law and order.

But lawmakers in Maryland and Virginia, riled when the Trump administration shelved longstanding efforts to move the headquarters to the suburbs, have put the old plan back in play. Last month, they secured language in a federal spending plan to steer the nation’s premier crime-fighting institution to one of their states.

It’s the latest turn in years of political maneuvering, with Democrats in Congress accusing President Donald Trump of derailing the move only to benefit his nearby hotel, and FBI Director Christopher Wray and other agency officials pushing to rebuild in place, as all agree it is past time to demolish the decrepit J. Edgar Hoover Building.

The FBI Agents Association, representing more than 14,000 active and former agents, is also against a move to the suburbs. Its president, Brian O’Hare, said in a statement Sunday that “what is best for the mission is for FBI headquarters to remain in Washington, D.C.”

Now that lawmakers insist the suburban project is finally moving forward, FBI officials have floated a new proposal to create a campus in Maryland or Virginia for the agency’s cyber workforce, which includes several thousand employees, while keeping a substantial portion of its employees in the District.

“The FBI can more effectively serve the American people from a headquarters located downtown,” said a statement Friday sent by the FBI’s press office. “But our mission would be enhanced by a consolidated suburban cyber and technology campus within the national capitol region to serve as a command center for cyber operations, consolidate the FBI’s existing cyber and technology footprint, and accommodate future growth.”

“In some ways this came out of the blue,” Connolly said of the cyber campus proposal. “We interpreted it as Director Wray’s attempt to distract everyone with a new idea and a new possibility, while he stays with a headquarters at the current site.”

For nearly two decades, everyone has agreed on the FBI’s need for a new headquarters. The Hoover building, a hulking edifice that occupies an entire block of prime real estate in downtown Washington, D.C., is falling apart and doesn’t meet the agency’s security requirements.

While President Barack Obama was in office, the FBI spent years working with the General Services Administration and Congress on a plan to move to the suburbs. The agencies were concerned about upkeep of the half-century-old structure. They also worried about security after the 1995 bombing of the Oklahoma City federal building and the 2001 World Trade Center attack.

After extensive planning, the GSA chose potential sites in Greenbelt, Landover and Springfield. The GSA has acknowledged spending $20 million on those plans, and private developers and state and local governments spent tens of millions more creating and advocating for proposals.

Those plans hit a wall in 2017 after Trump took office. The GSA, under an interim head named by Trump, cited funding issues in canceling the plan. Congress that year did not appropriate the full amount needed. And a planned swap of the Hoover building to a private developer in exchange for building a headquarters elsewhere had become a headache for the $3-billion project.

But Trump had also taken a keen interest in the plans. Before becoming president, he had considered bidding on the project himself. And in 2013, Trump had signed a lease with the GSA for the Old Post Office Pavilion, which he turned into the Trump International Hotel.

Democrats accused Trump of wanting to keep the FBI from leaving its Pennsylvania Avenue address to prevent a developer from putting a hotel there that would compete with his own. A White House spokesman under Trump denied the accusation, saying the responsible location for FBI headquarters was near the Justice Department.

For years, talk of Trump’s conflicting interests and intentions drowned out explanations from FBI leaders. Foremost, they said their current location allows easy interaction with the FBI’s governmental parent, the Department of Justice, which sits across the street. Also, they said the FBI should maintain a public-facing presence in the nation’s capital, rather than being secluded in a suburban campus, like the Central Intelligence Agency and the National Security Agency, which might prefer to remain out of sight.

Wray was appointed by Trump and sworn in on Aug. 2, 2017, weeks after the GSA announced its cancellation of the FBI’s planned move to the suburbs.

“So, I came into it with a blank slate,” Wray testified later during an April 2019 House Appropriations subcommittee hearing. “We took a very long, careful, thorough look.”

Asked during the hearing whether his predecessors had supported the suburban campus plan, which took shape under their leadership, Wray said he couldn’t speak for them.

“I know that when I came in, and I asked the question, ‘Tell me why we’re not building a building here in this location,’ it appeared to me that people had thought that was not an option that was available to us,” Wray said. “So I don’t know that given the choice, my predecessors wouldn’t have made exactly the same choice that I’m making.”

James Comey, who was FBI director from 2013 until Trump fired him in May 2017, kept a chunk of fallen concrete from the Hoover building’s facade in his office as a reminder of the need to upgrade. He declined, through his lawyer, to comment. Robert Mueller, FBI director from 2001 to 2013, did not return messages seeking comment.

In 2013, a top FBI official under Mueller described the agency’s ideal landing spot as a 40- to 55-acre campus that could accommodate 11,000 employees.

But FBI officials have said staying in D.C. became feasible in recent years as some jobs relocated and improved construction techniques allowed for better protections against threats such as truck bombs.

In 2018, the agency announced it would move 1,350 jobs from Washington-area locations to Huntsville, Ala. That plan has been fueled by new construction and funding secured by Sen. Richard Shelby, R-Ala., powerful vice chairman of the Senate Appropriations Committee. The agency also has moved hundreds of employees to Idaho and West Virginia.

With those positions relocated, the FBI needed space in its headquarters for only about 8,000 employees.

Lawmakers who felt whiplashed by the change of plans fiercely questioned FBI and GSA officials. During 2018 hearings, Sen. Chris Van Hollen, D-Md., hammered them on the security issue, urging them to concede that a downtown headquarters couldn’t possibly be as secure as a suburban campus.

“So the question will be, you know, what kind of security you are willing to give up?” Van Hollen said to Wray during a Senate subcommittee hearing.

“Obviously security is extremely important, not just to our folks, but to me since I’d have to work in the building,” Wray had said earlier in the hearing.

“The proposal that we’ve got on the table right now would allow us to get to level 5 security, much like our partners at say, New Scotland Yard, and various others around the world who function like us.”

Toward the end of Trump’s presidency, he grew frustrated with Wray over the director’s apparent unwillingness to make decisions that would improve his reelection chances. Although Trump weighed firing Wray, he never did. President Biden also has kept Wray on, adhering to a tradition of allowing FBI directors to serve 10-year terms to help insulate their law enforcement mission from politics.

The communities vying for the new FBI headquarters, an economic-development boon, have benefited from access to lawmakers in positions of power — including House Majority Leader Steny Hoyer, D-Md., one of Congress’s biggest power brokers, who for decades has steered federal dollars and projects to his state.

Van Hollen, chairman of the Senate Appropriations subcommittee on financial services and government operations, has been instrumental in securing the language in the spending plan, which had to pass through that subcommittee. Connolly and Sen. Ben Cardin, D-Md., also have oversight of the GSA as chairmen of subcommittees on which they serve.

“For the last four years, President Trump did all he could to block our efforts to construct a new FBI consolidated headquarters that meets the security and capacity needs of the Bureau solely because it stood to hurt his personal financial interests,” Van Hollen said in a statement last year about his efforts. “We fought back tooth and nail, and now, it’s past time to get this project back on track.”

Rep. Anthony Brown, D-Md., whose newly redrawn district includes both prospective Maryland locations, called the spending plan language “a significant step forward.” And Hoyer said he was “optimistic that come mid-September, there will be a Maryland site — either Landover or Greenbelt — selected as the new, consolidated headquarters for the FBI.”

Van Hollen and other Maryland lawmakers did not directly address the FBI’s current opposition to the suburban headquarters plan. But Connelly said, “It’s been known for quite some time that Director Wray doesn’t want to move.”

“One director does not get to make this kind of decision, nor does he get to circumvent the law,” Connolly said, referring to the spending plan language.

The language requires the GSA to select “in as expeditious manner as possible” a site from one of the three in play before Trump took office, and within 180 days of the selection, send Congress a report on planned construction.

Biden’s FY2023 budget proposal appeared to offer a more flexible vision, calling on the GSA to select a new FBI suburban campus for 7,500 employees and a D.C. location to support 750 to 1,000 personnel so they can be close to the DOJ, White House and Congress.

Connolly said he was concerned keeping hundreds of FBI personnel in D.C. would “defeat the purpose” of the consolidated suburban campus. A spokeswoman for Cardin said that after the GSA selects a site pursuant to the spending plan, “more details will start to come together. That later stage would be an appropriate time to talk about what personnel are where.”

The FBI’s statement Friday did not say how many employees might remain in a D.C. headquarters should a cyber campus be built in the suburbs. The agency said its cyber and technology workforce are now housed in more than 10 locations around the capital region — “some as much as a two-hour drive from each other.”

“Putting all our FBI and interagency cyber assets in the same place will allow us to more easily connect dots and spot threats,” the statement said. “And combining all that with our operational technology and IT functions will make sure our threat hunters and their tech are right next to the teams defending our own systems, each making the other stronger.”

Charting the path forward will heavily involve the GSA, whose spokeswoman, Christina Wilkes, said in an email Thursday that it “is committed to continuing to support the FBI to address their mission needs, to work with Congress, and to achieve the best value for the American people.”