Will Smith is banned for 10 years from academy events, including the Oscars 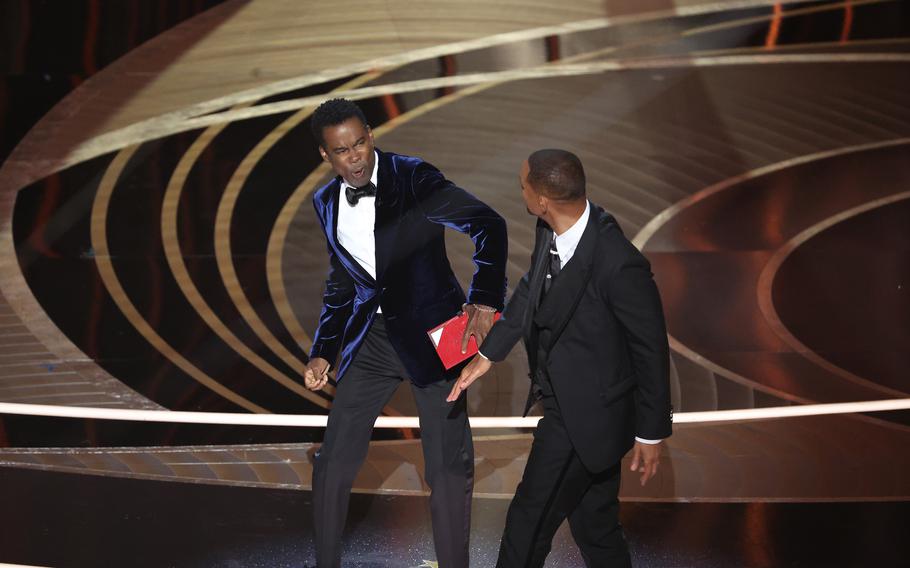 Chris Rock, left, and Will Smith onstage during the 94th Academy Awards at the Dolby Theatre on March 27, 2022, in Hollywood, California. (Myung Chun/Los Angeles Times/TNS)

LOS ANGELES (Tribune News Service) — Nearly two weeks after Will Smith slapped Chris Rock at the Oscars over a joke about his wife, Jada Pinkett Smith, the Academy of Motion Picture Arts and Sciences announced Friday it is forbidding Smith from attending any academy events, including the Oscars, for 10 years.

“The board has decided, for a period of 10 years from April 8, 2022, Mr. Smith shall not be permitted to attend any academy events or programs, in person or virtually, including but not limited to the Academy Awards,” the organization’s President David Rubin and CEO Dawn Hudson said in a open letter to members following a meeting of the organization’s 54-member board.

“This action we are taking today in response to Will Smith’s behavior is a step toward a larger goal of protecting the safety of our performers and guests, and restoring trust in the academy. We also hope this can begin a time of healing and restoration for all involved and impacted.”

The decision comes one week after Smith — who went on to win the lead actor Oscar less than an hour after striking Rock — resigned from the academy. “I will fully accept any and all consequences for my conduct,” Smith said in a statement announcing his resignation, calling his actions “shocking, painful, and inexcusable.”

By resigning, Smith preempted what many expected to be his potential suspension or expulsion from the academy. But the organization, under pressure to hold Smith accountable for the violent outburst that derailed the Oscars and stunned millions of viewers, was determined to press ahead with the disciplinary proceedings it announced the day after the ceremony.

In the run-up to the board meeting Friday — which was moved up from April 18 following Smith’s resignation — questions swirled over what steps the academy would take to punish one of the film industry’s most bankable and generally well-liked stars. The organization’s code of conduct, enacted in 2017 following the Harvey Weinstein sexual misconduct scandal, gives academy leaders wide latitude in the disciplinary measures they can undertake for violations of the group’s standards, ranging from a simple reprimand to expulsion and loss of eligibility to receive future Oscars.

In the wake of the Oscars, the academy faced fierce criticism over its handling of the incident, with many questioning why Smith was not removed from the Dolby Theatre after striking Rock and yelling profanities from his seat. In a statement last week, the organization said Smith “was asked to leave the ceremony but refused,” even as it expressed some misgivings over its own decisions that night. But conflicting accounts quickly emerged, with Smith’s camp disputing the nature of the academy’s request, further muddying the picture of what happened backstage in the tense and chaotic minutes after the altercation.

In its letter Friday, academy leaders expressed regret over their own handling of the incident and expressed gratitude to Rock for “maintaining his composure under extraordinary circumstances.”

“During our telecast, we did not adequately address the situation in the room,” Rubin and Hudson wrote. “For this, we are sorry. This was an opportunity for us to set an example for our guests, viewers and our academy family around the world, and we fell short — unprepared for the unprecedented.”

Since adopting its code of conduct, the academy has expelled only three people: Weinstein, director Roman Polanski and comedian-author Bill Cosby. Weinstein and Polanski still have their Oscar trophies.

The organization has only revoked one Oscar in its nearly centurylong history, taking back the award for the 1969 documentary, “Young Americans” after it was deemed to be ineligible for that year’s honor.

For Smith and the academy, the fallout from the incident has been severe, opening up an unprecedented rift between the organization that serves as the public face of the film industry and one of that industry’s biggest stars. It remains to be seen whether that rift can be repaired.

Speaking to the L.A. Times in advance of Friday’s meeting, one academy governor, who declined to speak on the record due to the sensitivity of the situation, expressed hope that the board’s decision will help close one of the ugliest chapters in the organization’s history: “It’s about moving forward. We love our show and we have to be protective of the academy. I think we have to do what feels right.”