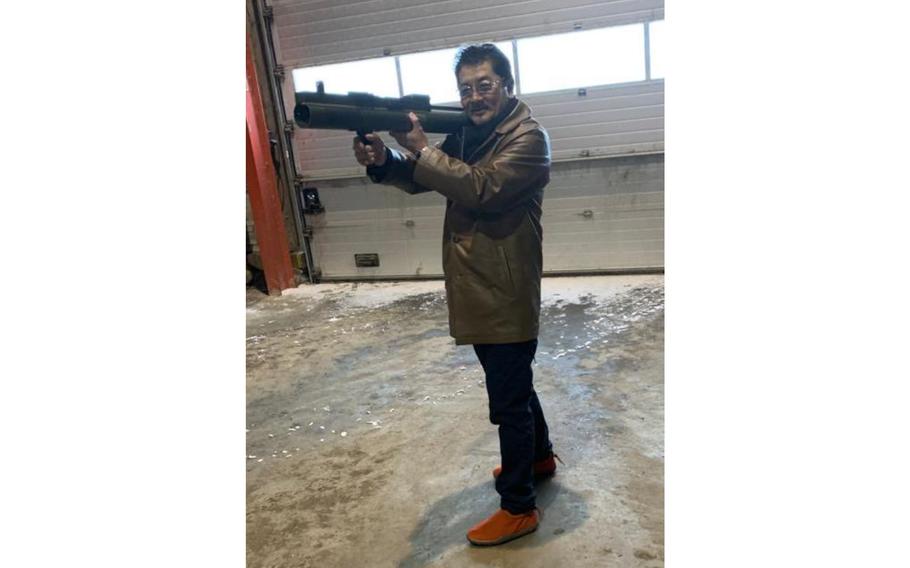 Takeshi Ebisawa, 57, a Yakuza boss, was busted in an elaborate sting trying to buy surface-to-air missiles supposedly stolen from a U.S. military base in Afghanistan, Manhattan prosecutors announced Thursday. Ebisawa posed with a rocket launcher and took a photo, which was included in the complaint. (U.S. Attorney’s Office, Southern District of New York)

(Tribune News Service) — A Yakuza boss was busted in an elaborate sting trying to buy surface-to-air missiles supposedly stolen from a U.S. military base in Afghanistan, Manhattan prosecutors announced Thursday.

Takeshi Ebisawa, 57, a leader within the Japanese crime syndicate, has been under investigation by the DEA since 2019, according to a press release. Undercover agents brokered a complex deal in which Ebisawa allegedly traveled to Copenhagen on Feb. 3, 2021, with plans to buy heavy duty U.S. Army weaponry stolen from a military base in Afghanistan.

Ebisawa was acting as a middle man and planned to send the weapons — including portable M72 light anti-tank rocket launchers, 10 M60 machine guns, and 10 fully automatic rifles — to armed ethnic groups in Myanmar, according to a complaint filed in Manhattan Federal Court. The ruse worked so well Ebisawa even posed with a rocket launcher and took a photo, which was included in the complaint.

Ebisawa and a Thai national, Somphop Singhasiri, 58, also are accused conspiring to sell 500 kilograms of methamphetamine and 500 kilograms of heroin to an undercover who intended to sell the drugs in New York. Singhasiri told the undercover they would sneak the drugs into the country in rice and noodle boxes, prosecutors said. The duo even provided the agent with samples of both drugs in advance of deals in June and September 2021, according to the feds.

“The drugs were destined for New York streets, and the weapons shipments were meant for factions in unstable nations. Members of this international crime syndicate can no longer put lives in danger and will face justice for their illicit actions,” said Manhattan U.S. Attorney Damian Williams.

Ebisawa was arrested in Manhattan on Monday. He referred to the weapons by the codeword “bamboo,” the feds said. Singhasiri, meanwhile, referred to meth and heroin in his dealings with the undercover as “ice cream” and “cake.” Two other Thai nationals, Suksan “Bobby” Jullanan and Sompak Rukrasaranee were also charged in the bust.

The Yakuza is made up of transnational crime families that operate in Asia, Europe and the Americas. Prosecutors said it is involved in a wide range of crimes, including weapons trafficking, drug trafficking, human trafficking, fraud and money laundering.