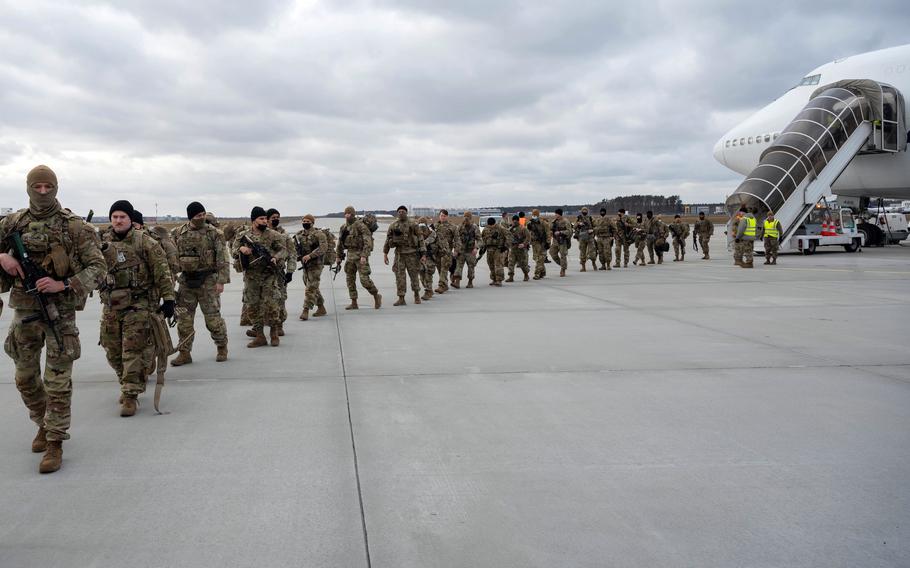 Soldiers disembark from a Boeing 747 at Rzeszów-Jasionka Airport in Poland on Feb. 8, 2022. (Taylor Slater/U.S. Air Force)

(Tribune News Service) — A federal judge issued a pair of landmark rulings barring the U.S. military from discharging soldiers who contract HIV and ordering the Pentagon to allow those who have the virus but no symptoms to become officers.

The decisions Wednesday by U.S. District Judge Leonie Brinkema in Virginia pave the way for career advancements for HIV-positive soldiers who have long been blocked by policies barring them from deploying overseas, even when their symptoms are suppressed indefinitely by highly effective drugs.

“The court ruled that the Pentagon’s policies regarding service members with HIV are not only outdated, but unlawful,” said Lambda Legal’s Scott Schoettes, who represented plaintiffs in both cases. The findings are among “the strongest judicial rulings in over two decades for people living with HIV,” he added.

The rulings could impact the Defense Department’s broader policy of barring people with HIV from enlisting. A parallel suit challenging that rule was put on hold in 2020 pending the rulings by Brinkema over deployment of HIV-positive soldiers. The judge in that case denied the Pentagon’s motion to dismiss the suit and said the broader policy appeared to have “no rational basis.”

Brinkema’s rulings Wednesday granted motions for summary judgment in a pair of 2018 lawsuits, handing victory to the plaintiffs without trial. Her ruling will be kept under seal for a few weeks while the parties agree on a redacted version, she said.

The suit over the officer ban was filed by Nick Harrison, a National Guard sergeant in Washington who claimed the HIV policy violated of the equal protection clause of the Constitution by preventing him from becoming a military lawyer in the Judge Advocate General’s Corps. The Oklahoma native, who deployed to Afghanistan and Kuwait before testing positive, argued there was a disconnect between advances in HIV science and the military’s rule.

“It’s profoundly emotional to know that all service members with HIV will now be able to serve and defend our country without discrimination,” Harrison, 43, said in a statement. “I’m incredibly pleased with the court’s decision, and it’s very reassuring to hear the court recognize that these policies are irrational and based on outdated stereotypes and stigma.”

The other case was filed by two Air Force airmen who were discharged because they tested positive for HIV. The men, who are participating in the case under the pseudonyms Richard Roe and Victor Voe to protect their identities, were told they had to go because their HIV status prevented them from deploying, and because deployment was a key part of their job.

The challenged decisions were seen as a shift in the Air Force’s treatment of HIV-positive personnel, because service members who previously contracted the disease were generally allowed to remain and perform different duties, if necessary, or get waivers. But in both of their cases, the inability to deploy was deemed to be too detrimental to their job.

Medical science is at the center of the disputes. Harrison and plaintiffs in the related case have argued that drugs developed in 1996 to prevent the virus from replicating transformed the landscape of HIV treatment. The drugs reduce the number of copies of the virus that can be detected in a milliliter of a person’s blood to lower than 20, making it technically undetectable.

About 2,000 people with HIV are serving in the military, according to court records filed in the case. Defense Department records say that from 2011 to 2016, the Navy diagnosed 388 sailors with HIV, while the Air Force diagnosed 181 airmen.