With Roe endangered, Democrats divide on saying the word 'abortion' 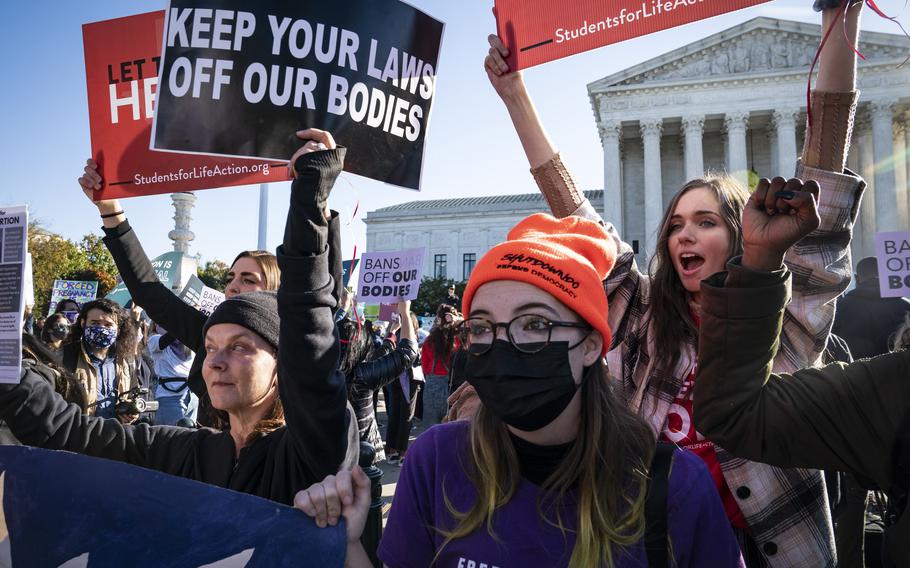 Anti-abortion and abortion-rights activists demonstrate in front of the Supreme Court on Nov. 1, 2021, in Washington D.C.  (Jabin Botsford/Washington Post )

WASHINGTON - After Texas passed its restrictive abortion law last fall, Democrats started talking more about abortion than they had in decades.

House Democrats coalesced around a bill to turn into law the Supreme Court's decision legalizing most abortions, Roe v. Wade, voicing their support for the landmark precedent in tweets and public statements. A few days later, three congresswomen shared their abortion stories on the House floor. And when he delivered his State of the Union address in March, President Joe Biden became the first Democratic president since Roe to use that platform to call for action on abortion rights.

Yet as Democrats seek to mobilize voters ahead of a Supreme Court decision that could overturn Roe, a rhetorical divide has emerged around the one word at the center of the debate. Many far-left liberals will say "abortion" every time they talk about the issue, while some Democrats who will face competitive races in 2022 and 2024 - including the president - have rarely used it, relying instead on broader terms such as "reproductive freedom" and "a constitutional right."

A diverse coalition of abortion rights groups, led by We Testify, a group with a large social media following that shares the stories of people who have had abortions, has intensified its calls for Biden and other Democrats to say "abortion," a move it argues would help destigmatize the procedure at a critical moment. In interviews with The Washington Post, leaders at Planned Parenthood and the National Abortion Rights Action League (NARAL), two of the nation's largest abortion rights groups, and Emily's List, which backs candidates favoring abortion rights, urged Democratic politicians to use the word.

Those abortion rights groups only recently shifted their rhetoric, moving away from a discussion of giving women the "choice" to a full embrace of the word "abortion," pushed by women of color-led advocacy groups that have championed the more direct language.

While many Democrats have become more comfortable talking about abortion, the word has remained a sticking point for many, especially in competitive districts. The decision to lean on other words is strategic, said Celinda Lake, one of Biden's lead pollsters in 2020: To build the broadest possible abortion rights coalition, supporters of abortion rights need to emphasize what unites voters on the issue - "freedom" over control, "personal decisions" over limitations.

"Most of these politicians have realized, particularly in more marginal districts, that you should talk much more about the shared value than the medical procedure," Lake said.

Voters, she said, generally are more receptive to statements like "we're going to protect reproductive health care, including abortion" than they would be to the word in isolation. That distinction is the key to Democratic success on the issue, Lake said.

"If we want to continue growing support in this country for Roe v. Wade, we need a bigger conversation," she said.

Approximately 60% of Americans say they want abortion to remain legal in all or most cases. By talking about abortion in these terms, Lake said, Democrats can generate "up to 69% or 70% support." 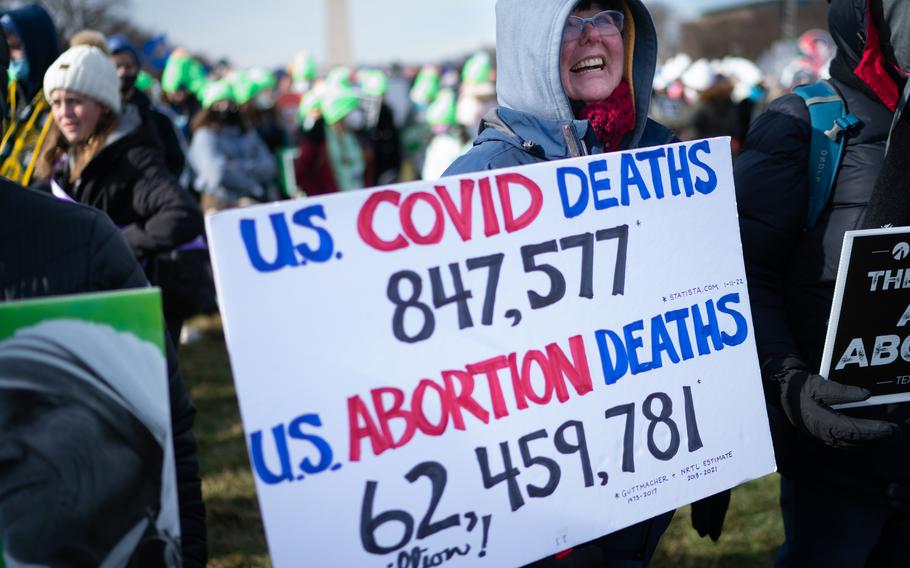 The vast majority of abortion rights groups say that's the wrong strategy. To protect the right to abortion, they say, Democrats need to unapologetically embrace abortion, a process that starts with saying the word and continues by talking about the procedure as a positive, said Renee Bracey Sherman, founder and executive director of We Testify, who created an online tracker titled "Did Biden Say Abortion Yet?" (So far, Biden has included the word in three public statements and one tweet but has not said the word in public as president, according to a review of his comments.)

"We cannot afford to have a pro-choice president who is afraid to say the word abortion . . . Stigmatizing abortion is not presidential," Bracey Sherman wrote in a statement after Biden did not use the word in his State of the Union address as he called for the protection of reproductive rights.

"Voters want to know where their lawmakers stand and elected officials who support abortion access would be wise to make their commitment crystal-clear," said Timmaraju. "Using euphemisms can fuel stigma and being direct about support for abortion rights is not only the right thing to do, but also politically advantageous."

McGill Johnson echoed the sentiment. "Voters expect candidates to say what they mean, without unnecessary vagueness," she said.

Politicians are imagining the word "abortion" to be more alienating than it actually is, abortion rights advocates say. While other terms might poll better with moderate voters, pollsters agree that the word itself isn't as alienating as it once was.

Tresa Undem, a pollster who has led hundreds of focus groups on abortion, said she's noticed that abortion has become far less stigmatized in recent years. Ten years ago, she said, the room would get silent as soon as someone started talking about their own abortion. "The air would get sucked out of the room," she said. But now, she added, people are far more likely to casually mention their abortion experiences.

Members of the Biden administration shrugged off the president's apparent reluctance to say "abortion." Asked about it in a December news conference, White House press secretary Jen Psaki said people should focus on "what the president does in his actions and what he fights for," alluding to Biden's efforts to protect abortion rights, including his administration's decision to sue Texas for its six-week abortion ban, and to throw his support behind the Women's Health Protection Act, the bill to codify Roe v. Wade that was blocked by the Senate in February.

Biden, who is Catholic, said in a 2012 vice-presidential debate that he personally believes life begins at conception; over the course of his 49 years in national politics, he has moved significantly to the left on the issue. In 2019, he came out against the Hyde Amendment, which prevents federal funds from being used for abortions, after he came under pressure from abortion rights advocates and other presidential candidates.

Like Biden, Rep. Conor Lamb, a Democratic member of Congress now running for Senate in Pennsylvania, often uses "a woman's right to choose," "health care" or "services" instead of "abortion." In a recent interview, Lamb said he was not trying to avoid the word. When he talks about the issue publicly, he said, he likes to emphasize the importance of "choice."

"I don't have any problem saying the word 'abortion,' " said Lamb, who says he is personally opposed to abortion as a Catholic but fully supports the rights established in Roe in his capacity as a lawmaker.

"I try not to make the discussion about a particular procedure so much as about the more fundamental question of who gets to decide," he said.

The abortion rights groups pressuring politicians to focus on the word have joined in an unlikely alliance with antiabortion groups, who have long demanded that those favoring abortion rights say "abortion." Those antiabortion groups view the emphasis on "choice" as an attempt to divert attention away from the procedure itself. If Democrats make the conversation about "a woman's right to choose" or a "constitutional right," more moderates will support their position on abortion, said Mallory Carroll, vice president of communications at Susan B. Anthony List, a national antiabortion organization.

"That sounds so much better," Carroll said. "Everyone can get behind the constitution. Everyone likes the idea of rights."

When they addressed abortion in other statements and speeches in the 1990s, Democrats generally tried to appeal to the largest possible cross-section of voters, said Mary Ziegler, a law professor at Florida State University and Harvard Law School who specializes in the history of abortion. Democratic leaders at the time emphasized that being "pro-choice" was not being "pro-abortion." As he campaigned for president in 1992, Bill Clinton said abortion should be "safe, legal and rare," coining a phrase that defined the party's position on abortion for years.

"That was the argument of Biden's formative years in the Senate," Ziegler said.

Even after that phrase drew criticism from some abortion rights groups who said it stigmatized those who needed abortions, Democratic leaders continued to frame the issue in a similar way. When Obama broached the subject in his 2015 State of the Union, he celebrated the decreasing numbers of abortions in the United States, but didn't propose any action.

"We still may not agree on a woman's right to choose, but surely we can agree it's a good thing that teen pregnancies and abortions are nearing all-time lows," he said.

Some abortion rights groups have resisted this kind of rhetoric from the beginning. Within the reproductive justice movement, advocates challenged Democratic leaders starting in the 1990s, Ziegler said, pushing them to abandon phrases like Bill Clinton's and any language that suggested people seeking abortions were irresponsible or otherwise at fault. They also challenged the fact that politicians did not focus on the barriers to abortion among low-income people and people of color, she said.

As those groups have become more prominent within the abortion rights movement, they have influenced mainstream Democratic beliefs, convincing many more lawmakers to address abortion with more direct language, said Zakiya Luna, a professor of sociology at Washington University in St. Louis, who focuses on the reproductive justice movement. Groups like SisterSong, a reproductive justice organization formed in 1997, said words like "choice" might alienate those who don't have equal access to abortion care.

"For decades, BIPOC people have been telling mainstream folks in the reproductive rights space, 'What you're doing isn't protecting all of us,' " Luna said. Reproductive justice leaders have urged mainstream abortion rights organizations to "be bold" when talking about this issue, she added.

McGill Johnson of Planned Parenthood said the group would now use a term like "pro-abortion," a drastic change from the group's rhetoric even a few years ago.

Since she started her online tracker of Biden's comments, Sherman of We Testify said, people sometimes ask why it matters that he has not said the word as president, especially when his administration is taking action on the issue. "It's just a word," she said they'll tell her.