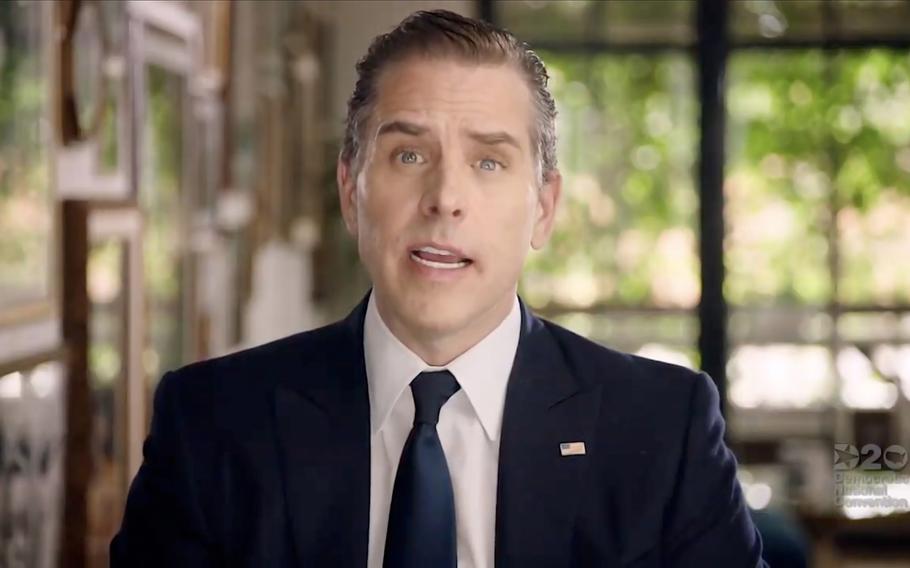 A screengrab from the livestream of the 2020 Democratic National Convention, shows Hunter Biden, son of Joe Biden, addressing the virtual convention on Aug. 20, 2020. (DNCC Handout/Getty Images/TNS)

When the New York Post reported on Oct. 14, 2020, that it was in possession of emails between a Ukrainian businessman and Hunter Biden, son of the then-Democratic presidential nominee, it would have been hard to predict what followed. This was less than three weeks before the election itself, and the content of the report was soon subsumed to the odd way in which the paper obtained the information. Mainstream outlets and social media companies balked at elevating the story’s claims, triggering frustrations on the right that remain to this day.

New reporting has re-elevated questions about how the story emerged and was handled. In light of that resurrection, it seems useful to articulate exactly why there was suspicion about the story’s origins - suspicion that itself has not entirely been resolved.

Was the sourcing for information sufficiently dubious to justify caution by mainstream outlets? The answer, it seems clear, is yes.

Hunter Biden allegedly showed up at a computer repair shop with three water-damaged laptop computers. According to John Paul Mac Isaac, the proprietor of that shop, one of the three computers was beyond repair, one simply needed an external keyboard and one required data recovery. Mac Isaac recovered the data, but no one ever came to pick the machine up. Eventually the data from the computer made its way to Rudy Giuliani, Donald Trump’s personal attorney. It was Giuliani that gave it to the Post.

That summary excludes a lot of detail, some known at the time the Post story broke, some that only emerged afterward. Here, in the form of a timeline, is detail that seems salient to our current consideration of how the Post got the material from the laptop as well as what was known at the time.

It’s critical to remember what happened in the 2016 election cycle. Then WikiLeaks published two large clusters of documents stolen by Russian hackers from the Democratic National Committee’s network and from John Podesta, a top aide to the Democratic nominee, Hillary Clinton. The Podesta material in particular was released in tranches for days beginning Oct. 7, 2016. It was real information, understood even then to have been a product of Russian efforts, that became fodder for criticism of Clinton.

After the election, the coverage of the WikiLeaks material took on a new light: It was stolen by a foreign government to try to influence U.S. politics. Media companies reconsidered their coverage; should there have been more caution about playing into the hands of a foreign influence campaign?

This question was very much on people’s minds in the months before the 2020 election - particularly given indications that Russia was again hoping to aid Trump’s election.

The other overlapping factor coloring the release of the Post story was the investigation into Trump’s effort to leverage Ukrainian aid to damage Biden the previous year.

Giuliani was central to that effort. In late 2018, he began exploring the idea that Biden, as vice president several years before, had improperly tried to influence Ukraine to block an investigation of Burisma, a company for which Hunter Biden served as a board member. This story, promoted by an investigator targeted for termination by the U.S. government, was later debunked, but it seemed a promising line of attack. On April 1, 2019, a writer named John Solomon wrote the first of several stories about the allegations.

On April 12, the laptops were dropped off at Mac Isaac’s repair shop. Mac Isaac is legally blind and was not able to identify Hunter Biden by sight. One of the laptops, though, bore a sticker for the Beau Biden Foundation, an organization dedicated to Hunter’s late brother.

At some point in the middle of this month, Hunter Biden left Burisma’s board. Presumably he was by that point aware that questions were being asked about his role. If not, it became very clear on May 1, when the Times elevated the Burisma question in its coverage.

In the meantime, Volodymyr Zelensky had been elected president of Ukraine, and efforts to pressure him to announce an investigation into Biden began. In early May 2019, Giuliani planned a trip to Ukraine to dig up information that might damage Biden - a plan that was covered in the press. After broad outcry, he scrapped the trip. But the signal was sent: Giuliani was seeking information deleterious to Biden.

Later that month, someone in Kyiv was approached about buying Hunter Biden’s emails. This was not reported until Oct. 21, 2020, a week after the Post’s story about the laptop.

“The two people who said they were approached with Hunter Biden’s alleged emails last year did not know whether any of them were real and they declined to identify who was behind the offers,” Time’s Simon Shuster wrote. “ ... The two people said they could not confirm whether any of the material presented to them was the same as that which has been recently published in the U.S.” At least one, though, said the material in the Post was “familiar-looking.”

It’s not clear what this was or what the source was. It could have been from Biden’s business partners in Ukraine. It could have been from a hack of Biden’s account; his primary email address was an Apple iCloud account, meaning that emails and photos probably sat online where hackers might be able to access them. In mid-September 2019, the other person who spoke with Shuster was offered similar material.

It’s possible that Mac Isaac himself created the PDF, as the beginning of the impeachment investigation into Trump for his interactions with Ukraine had begun the previous month. Wall Street Journal reporter Michael Bender reported in his book “Frankly, We Did Win This Election” that Mac Isaac, hearing Hunter Biden come up as part of the impeachment investigation, asked his father for advice on the laptop. Eventually, a connection was made to the FBI and, on Dec. 9, the FBI appeared with a subpoena for the laptop and for a hard drive. It’s not clear what was on that hard drive, though it may have been a backup made by Mac Isaac.

At the time, incidentally, Giuliani was in Ukraine looking to dig up dirt disparaging Joe Biden. That included meeting with a member of the Ukrainian parliament who was later sanctioned by the Treasury Department as a Russian agent.

At some point, Giuliani came into possession of the material from the laptop. The Daily Mail reported in December 2020 that the material was turned over to Giuliani’s lawyer no later than May of that year. According to Bender’s conversation with the lawyer, Robert Costello, that didn’t happen until August - purely by chance.

“In August 2020 - on a whim, as Costello described it to me - he asked Giuliani’s assistant to keep an eye out for any strange political tips coming into the email boxes for Giuliani’s various companies. Costello had a couple of dozen emails within a few days, including one from J.P. Mac Isaac,” Bender wrote.

By September 2020, Stephen Bannon, another ally of Trump’s, was bragging about having it. On Sept. 28, he gave an interview with a Dutch television network hyping his possession of the laptop.

There were already strange rumblings about Hunter Biden at the time. Earlier that same month, someone was passing around a lengthy dossier of allegations about Hunter Biden’s business dealings with China, created by a nonexistent entity. That document was shared, among others, by an employee of the Chinese billionaire Guo Wengui.

Guo is also the owner of the boat on which Bannon had been arrested for fraud in August 2020. After the Post report on Hunter Biden’s laptop, the Daily Beast uncovered claims promoted by outlets linked to Guo focused on a Hunter Biden laptop.

“3 hard disk drives of videos and dossiers of Hunter Biden’s connections with the Chinese Communist Party (CCP) have been sent to Nancy Pelosi and DOJ,” one tweet read. “Big money and sex scandal!” That was published Sept. 28, the same day as Bannon’s interview with Dutch TV. Similar allegations had been made days before.

The first time the Post saw the material was on Oct. 4. By Oct. 11, Giuliani had handed over the entire duplicated contents of the hard drive and the newspaper began debating how to handle it.

The Times would later report that this was contentious even at the conservative publication. Fox News had already passed on it, apparently in part because of the questions about provenance. A number of Post employees questioned whether the paper had done enough to vet the material. Speaking to the Times, Giuliani insisted that this was exactly why the Post was given all of it: “either nobody else would take it,” he said, “or if they took it, they would spend all the time they could to try to contradict it before they put it out.”

After the story came out, the Post didn’t share the material with other outlets for them to do their own investigations. In other words, coverage necessarily depended on taking the Post’s word for things, which is by itself a disincentive for other outlets.

After the story published Oct. 14, media outlets tried to assess its credibility, without luck. Mac Isaac gave a lengthy, odd interview to reporters that same afternoon in which he repeatedly gave evasive answers and appeared to change his explanations for how he knew whose laptop it was and how it got to the FBI. In the days that followed, the Time and Daily Beast reports reinforced questions about how the material was obtained and how it was being used explicitly to aid Trump’s campaign.

Even today, the full story isn’t clear. Is the story straightforward - Mac Isaac obtained a laptop, thought it might be relevant to national politics and then found only one taker, Giuliani, for the material? Was the material reportedly circulating in Ukraine the same stuff? Nonexistent? Obtained from an iCloud hack independently? Did Guo learn about the laptop from Bannon, with mentions of the material in September following from there? It is of course always easy to ask infinite questions when you’re skeptical, but that the answers to this aren’t known now reinforces the reasons for skepticism 18 months ago.

The reticence to aid possible Russian interference probably had one unintended effect: It made the contents of the drive itself as reported by the Post seem more important than it would likely have been considered otherwise. But that is a subject for a different article.