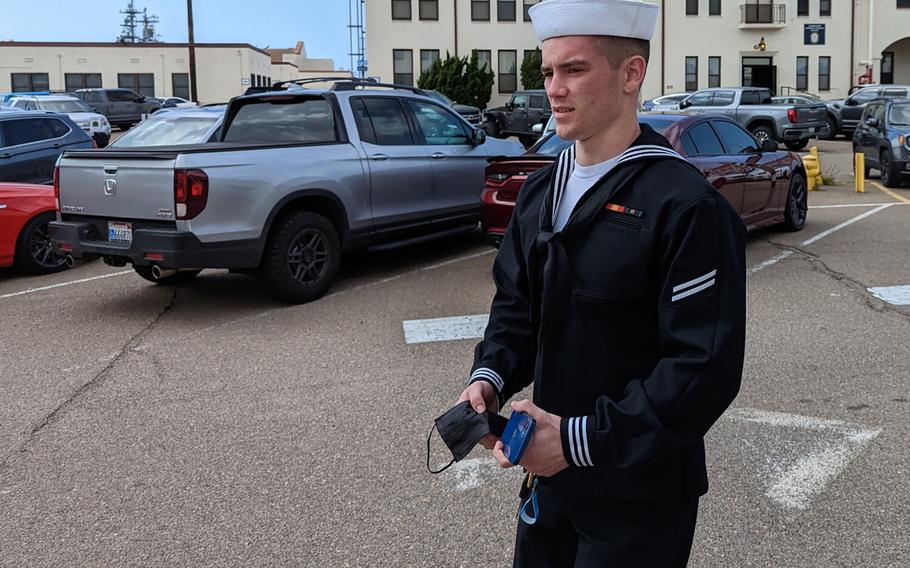 The trial is scheduled to begin Sept. 19 and run for two weeks, according to Lt. Sam Boyle, a Navy spokesperson assigned to 3rd Fleet in San Diego. Mays has not yet entered a plea, nor has he elected whether to face trial by judge or by jury, Boyle said.

Mays was on duty on the ship the morning of Sunday, July 12, 2020. The seaman was seen carrying a heavy bucket down into the ship's lower vehicle storage area just after 8 a.m., according to a sailor who was on watch who testified at Mays' preliminary Article 32 hearing in December.

Prosecutors say Mays was disgruntled with the Navy after finding himself assigned to deck duty on the ship after washing out of Navy SEAL training. At the December hearing, a Bureau of Alcohol, Tobacco, Firearms and Explosives arson expert said the fire was intentionally set in the lower vehicle storage area, or "lower-v," by someone holding an open flame to a tri-wall container, which is essentially a large cardboard box used to store equipment.

However, prosecutors did not present any physical evidence tying Mays to the fire at either of his preliminary hearings and relied on eyewitnesses — one who says he saw Mays near the scene just before the fire began and others who heard him make comments disparaging the Navy.

Acrid black smoke billowed from the ship for the better part of two days as firefighters from the Navy and local municipal agencies struggled to get water to the flames. Temperatures on board the steel ship soared, compounding the risk to those fighting the blaze. The flames consumed nearly the entire interior of the ship from the waterline up, a Navy investigation found.

The fire was declared extinguished after burning more than four days.

The ship was decommissioned and scrapped last year after the Navy determined it would be too costly to repair or retrofit the 844-foot warship.