Inside Biden's last shot at salvaging his personal new deal 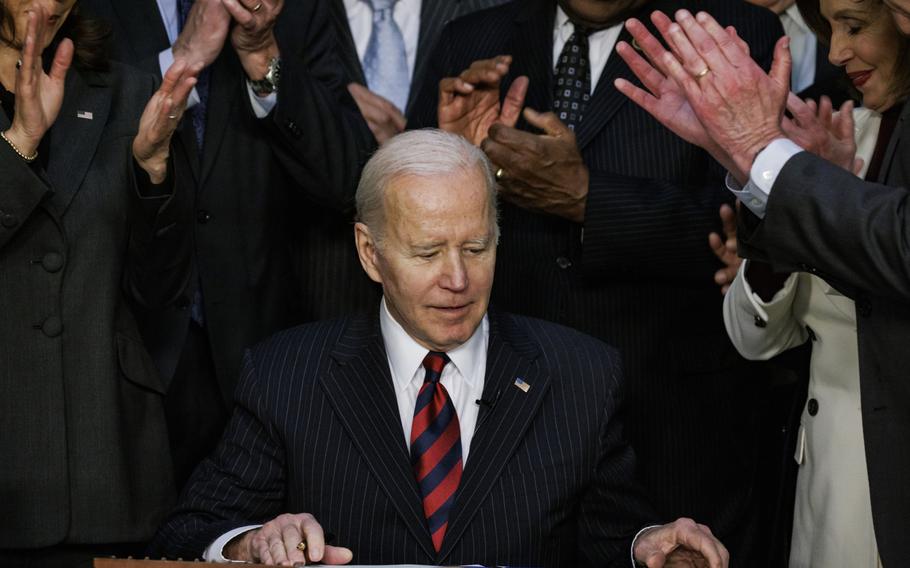 Every time President Joe Biden sits at his ornately carved 19th-century oak desk in the Oval Office, he's confronted with a massive portrait of Franklin D. Roosevelt reminding him of an unfulfilled promise to bring sweeping social change.

His Build Back Better plan rivaled the ambition of FDR's Depression-era New Deal, with a price tag of $3.5 trillion. It aimed to plug holes in the social safety net ripped open by the pandemic. It would have transformed U.S. energy policy to slow the planet's warming and paid for child care, community college, leave for parents and caregivers and in-home care for the elderly and the sick.

Its demise boils down to a miscalculation in the White House's handling of Joe Manchin, the Democratic senator from a Trump-loving, coal-dependent state who can be vague and unpredictable in what he will support. Whether any of it can be salvaged will depend on the extent to which Biden is willing to get personally involved in mending the relationship with the most powerful politician in Washington, a man who has been tagged with the moniker "President Manchin."

The two men haven't spoken about the legislation in months, and time is fast running out. A deal could temper a restive electorate pinning its dismay over spiraling inflation on the incumbent and spare congressional Democrats the loss of control of Congress come November. Biden, whose legacy and political future are on the line, is looking for what he can salvage even as his aides try to distance him from the wreckage of his failed agenda.

"I'm not asking for castles in the sky," Biden pleaded on Jan. 19, among the few times he publicly addressed Build Back Better since its collapse.

This account of how Build Back Better went so wrong, and the behind-the-scenes efforts to resurrect what should have been Biden's most consequential piece of legislation, is based on conversations with multiple people around the White House and the Capitol who watched negotiations slowly implode. White House and Manchin spokespeople declined to detail the two men's communications. Manchin declined requests for an in-depth interview for this story.

The 74-year-old senator from West Virginia had been a mainstay at White House negotiations since the fall, as Biden's top aides wooed him for his pivotal vote in a Senate split down the middle. After months of resistance by Manchin, talks came to a humiliating halt in December when Manchin went on Fox News, the home field of the Republican Party, to cast a de facto veto. 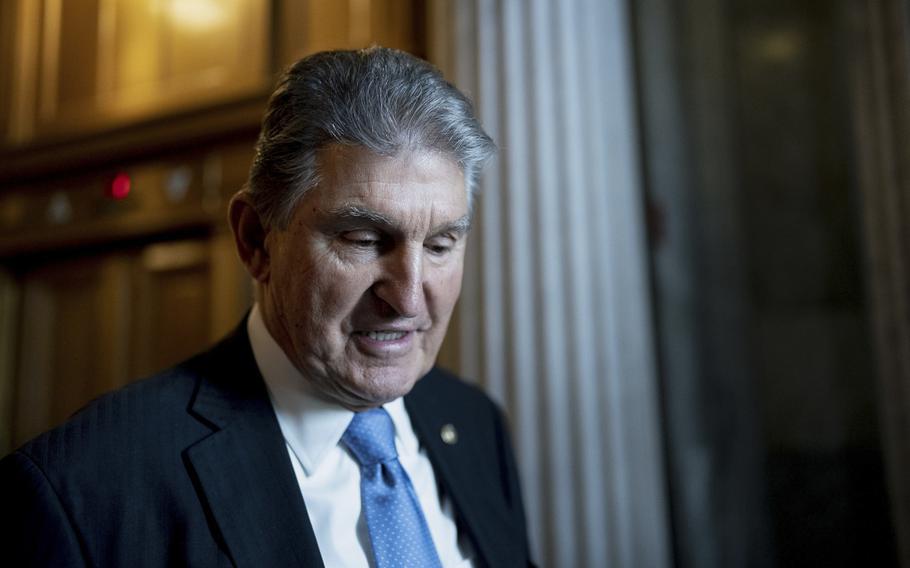 Biden was blindsided. Days earlier he had reason to believe aides were closing in on a deal. But anyone on the outside could see the two sides were talking past one another.

Biden this week attempted to court him and other moderates by making deficit reduction, rather than sweeping new social spending, the centerpiece of his $5.8 trillion budget proposal to Congress. But Manchin doomed two pieces of the plan - ending a tax break for fossil fuels and taxing unrealized capital gains - just hours after Biden announced them.

Manchin, however, has made his own indirect overtures. He unequivocally backed Biden's Supreme Court nominee and has signaled he's willing to restart talks in late April or May on a slimmed-down version of the plan, a far cry from the social overhaul progressives and Biden championed. Manchin's latest offer: $1.8 trillion in tax increases and drug cost savings that pay for climate change initiatives and cuts to the deficit.

He also wants to include domestic fossil fuel production incentives in the deal. Manchin's personal fortune comes from his stake in a coal company he founded in the 1980s and he has fiercely protected the state's coal and natural gas industry during negotiations on the climate portions of the bill.

"We're looking to see if anybody wants to talk," Manchin said this week, setting a July 4 deadline for any bill to pass before governing takes a back seat to campaigning for the November elections.

The question remains whether Manchin's offer is a foundation to rebuild trust and move forward with a package that has polled well with voters and can get the support of progressives as well as fellow Senate holdout Kyrsten Sinema of Arizona, another moderate Democrat Biden needs.

Biden made his ambition clear when he used his first major address to Congress to float the outlines of his social spending agenda. But before he spoke that night in April 2021, Manchin told reporters the plan made him "uncomfortable."

A key problem that soon emerged is that Biden was overly confident in his ability to grease the wheels in Congress because of his nearly four-decade career there. He had built a reputation as a skilled negotiator who helped his former boss, President Barack Obama, secure the votes for his own legacy achievement, the Affordable Care Act.

But Biden's vaunted abilities were honed in the days when the Senate was a chummy club of White, mostly wealthy, men who hashed out deals late into the night over stiff drinks in smoke-filled cloakrooms - not on Twitter, where partisan one-upmanship rules.

Manchin, on the other hand, came to fame in a 2010 Senate election when he aired a campaign ad showing him literally shooting down a climate-change bill backed by Democratic leadership.

Not only did the White House misread Manchin, it wrongly assumed that congressional Democrats were united. While Manchin's discomfort simmered on the right, the left wing took Biden's plan as an invitation to dream even bigger.

Manchin, who represents a state former President Donald Trump won in 2020 with 69% of the vote, made pilgrimages to the White House, while West Wing aides were dispatched to Capitol Hill for late-night meetings with him and Sinema. It was a throwback to the days of Biden's Senate.

In late September, domestic policy director Susan Rice, economic council director Brian Deese and Steve Ricchetti, one of Biden's most trusted senior aides, huddled with the senators in Manchin's Senate basement hideaway to discuss how to separate BBB from a bipartisan infrastructure bill.

Before the meeting, Sinema noted they hadn't opened the liquor cabinet yet. "That's news," she quipped to a reporter who was present.

"Working, working, working," Manchin said before the meeting. Ohio Senator Rob Portman, a Republican supporter of the companion infrastructure bill, swung by and Manchin poured him a drink.

That night, Manchin said he was hopeful for a deal.

He had however already set a $1.5 trillion limit - less than half of Biden's price tag and a fraction of progressive Senator Bernie Sanders's $6 trillion version. He told Senate Democrats during a heated caucus luncheon that he was just fine doing "nothing" on the bill, making a zero symbol with his hands for emphasis.

Biden's own courtship of Manchin was marred by unforced errors, including touting a supposed November agreement that expanded Medicare coverage, something Manchin didn't support. Those problems may have been averted had Biden - whom Manchin is said to personally like - done the arm twisting himself, rather than deputizing senior staff who Manchin deems too liberal.

A White House spokesman said Biden and Manchin "have a strong relationship and longtime friendship based on mutual respect and shared values," adding that "we do not comment on the specifics of our contacts with lawmakers."

An irate Manchin didn't take kindly to Sanders turning up the pressure with an op-ed in the Charleston Gazette-Mail asking him to get on board. "This isn't the first time an out-of-stater has tried to tell West Virginians what is best for them despite having no relationship to our state," Manchin retorted in a statement.

A few days later, Biden tried to serve as a mediator in a series of meetings with the feuding Democratic factions, including a breakfast at his home in Wilmington, Delaware, with Manchin and Senate Majority Leader Chuck Schumer.

"This initiative is about betting on America, about believing in America," Biden implored publicly during a late October trip to Kearny, New Jersey. "Let's get this done, let's move."

One side of Capitol Hill did just that: The House in November passed a $2.2 trillion version of the bill, with Democrats dancing in the aisles and chanting "Build Back Better."

But outside of the Beltway, voters were growing nervous about the size of the bill as Republicans pushed the line that it amounted to a "socialist wishlist."

That made it easier for Manchin to withhold support. So, too, did a new GOP-sought cost estimate for the package that used controversial assumptions and was much higher than earlier figures. Sporting a rumpled salmon tie and a tired expression, he appeared on Fox News to deal Biden's treasured project a fatal blow.

The White House reaction on Dec. 19 was swift and sharp.

"Maybe Senator Manchin can explain to the millions of children who have been lifted out of poverty, in part due to the Child Tax Credit, why he wants to end a program that is helping achieve this milestone," White House Press Secretary Jen Psaki said hours later of a piece of the bill.

Klain approved that punch and others. Klain and Manchin have talked by phone since then, though most White House outreach to Manchin has come from Ricchetti, a former lobbyist.

Manchin "has tremendous respect for the president and his staff and will continue to look for ways to work together," Sam Runyon, Manchin's spokeswoman, said.

The fractures are starting to heal, with White House policy aides again talking to Manchin staffers. But high-level overtures have been left to Virginia Senator Mark Warner, with whom Manchin is close, fellow moderate Senator John Tester of Montana and Biden emissaries Tom Carper and Chris Coons, the senators from Delaware.

All that is left is to learn from past mistakes.

Biden aides see no immediate upside to direct talks, three people familiar with the negotiations said. They are keeping the president away from any public or private talks with Capitol Hill amid concern that talking about the bill could hurt Biden politically.

"There is no reason for him to be personally involved for some time to come," said former Senate Majority Leader Tom Daschle, who remains close to several top Biden aides.

But foisting Manchin off on his Senate colleagues is a risky strategy. The tantalizing enigma is whether Biden will pick up the phone and take his biggest political challenge - uniting his divided party - into his own hands.

"The president needs to make this happen," said Pramila Jayapal, the chair of the Congressional Progressive Caucus. "Whether he does this publicly or privately, I don't care."