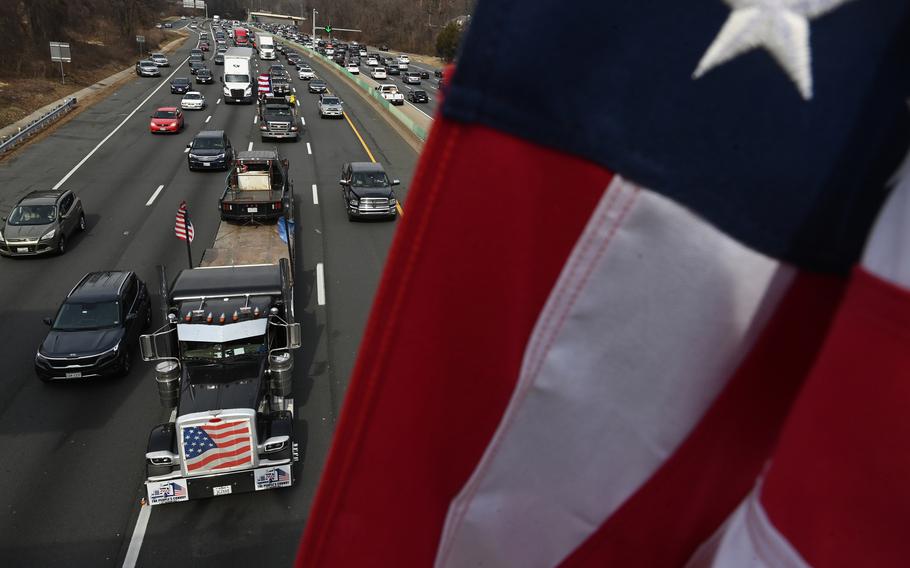 WASHINGTON — The group of truckers calling themselves the "People's Convoy," which protested vaccine mandates and other right-wing grievances by driving around the Washington region for more than three weeks, has left its Western Maryland home base Thursday morning to challenge proposed coronavirus vaccine and health-related bills in California.

The protest failed to accomplish any of its stated demands and recently saw dwindling numbers, fractures among supporters, pushback from local residents and activists and road blockages from District of Columbia police.

Organizers instructed the group to pack up from the Hagerstown (Md.) Speedway — where they have been based since arriving from Southern California on March 4 — before heading across the country to an April 10 anti-vaccine mandate rally in Los Angeles.

"What do you all think about heading to California?" co-organizer Mike Landis told the crowd on Sunday. "We're not done here. But we'll go to California and raise awareness on this along the way and hopefully gain more people like we did on our way here — and then once we stop this, we will come back to finish this job." He did not elaborate on what finishing the protest meant.

Although the People's Convoy is departing from Hagerstown, researchers cautioned that adherents may remain in the region while others will return home to their local communities, armed with more misinformation. Landis has said the group intends to target certain proposed bills in California, and Brian Brase, the convoy's de facto leader from northwest Ohio, has mused about running for a school board.

"The convoy is everywhere," Sara Aniano, a Monmouth University graduate student who studies the social media rhetoric of far-right conspiracy theories, said about the anti-vaccine mandate movement. "Those people are everywhere and they will run for office, and they will vote and they will try to be in charge of running elections and ballot counting and poll watching."

Although inspired by Canadian demonstrators that occupied downtown Ottawa to protest a rule barring unvaccinated truckers from crossing the border and other public health measures, the tactics employed by the People's Convoy were different: Rather than occupying the city, they embarked on hours-long demonstrations that amounted to sitting in traffic on the Beltway and later driving in Washington. The protest kicked off in Adelanto, Calif., on Feb. 23 despite many pandemic-related restrictions at the federal and local levels already being blocked or rescinded.

Landis said the convoy is headed to Los Angeles to attend a protest organized by Defeat the Mandates — the same group that rallied on the steps of the Lincoln Memorial in January, attracting thousands of people from across the country including anti-vaccine crusaders such as Robert F. Kennedy Jr. and Robert Malone.

Anti-vaccination leaders have seized on the uncertainty from the coronavirus pandemic to propel their once-fringe movement into the homes of millions of Americans, dissuading families from receiving the coronavirus vaccines — some of the most effective medicines in human history — during a pandemic that has killed more than 978,000 Americans. Brase said in a Facebook Live talk that he will be a guest speaker at the Los Angeles rally.

The People's Convoy brought together parents concerned about vaccine mandates for their children, health-care workers who refused to be vaccinated as well as members of the Three Percenters — part of the self-styled militia movement and those who believe QAnon conspiracy theories, including false claims about satanic child-sex-trafficking rings. Christian nationalism was evident in the group's frequent prayers and comparisons to biblical battles. Some have urged citizen's arrests of President Joe Biden and Vice President Kamala Harris and bragged about storming the Capitol on Jan. 6, 2021, as part of the insurrectionist mob.

Still, it does not appear all of the group's supporters and drivers will be joining the California trip. Social media posts indicate another group plans to stay at the Hagerstown Speedway amid hope more convoys will arrive. Some of those supporters expressed frustration online about the People's Convoy's new plans for California.

It's not clear how big a presence those remaining will have or what they plan to do. Lisa Plessinger, the speedway's general manager, said she told protesters she needs her space back by April 7 because of races scheduled for April 9.

Local authorities have seen a "significant decline" in the number of vehicles and trucks in Hagerstown, most of which are not large trucks, Chris Rodriguez, director of D.C.'s Homeland Security and Emergency Management Agency, said on March 25. About 1,000 vehicles initially converged on the speedway, including truckers and their supporters. Rodriguez estimated on March 25 that there were about 100 vehicles present. It was not immediately clear how many vehicles remained on Thursday or joined the trip to California.

Organizers of the People's Convoy also said the group will eventually return. Brase, who left Hagerstown earlier this week, encouraged other convoys to head to the nation's capital.

"We're all in this together; it doesn't matter which group you represent," he said Tuesday on Facebook Live. "The fight is still in D.C., 100 percent."

The lead group's departure to California marks a potential reprieve for the Washington region, where area residents have reported harassment and attacks from drivers. The demonstration against vaccine mandates and airing of other right-wing grievances has morphed in recent weeks into drivers honking their horns through city streets.

Brase rallied supporters by calling pandemic-related mandates an infringement on their freedoms, and previously said the group would not leave until there was an end to the national emergency declaration in response to the coronavirus. The group also called for Congress to hold hearings investigating the government's response to the pandemic.

Brase and others met with Republican lawmakers inside the U.S. Capitol and gave Sen. Ted Cruz, R-Texas, a ride from the speedway into D.C. for a news conference. But the People's Convoy did not accomplish its goals. The group now says that even raising awareness of their protest counts as a success.

Convoy supporters have bragged about being a part of the insurrectionist mob. Cowboys for Trump founder Couy Griffin spoke at the speedway following his federal conviction for trespassing in the Jan. 6, 2021, attack on the U.S. Capitol. According to a YouTube video dated March 26, Brase told those gathered around a campfire that if he was in D.C. that day, he would have entered the Capitol.

The move to California comes as the Unity Project, an anti-vaccine activism group that has supported the convoy — including helping it launch in February — is encouraging its supporters to fight the same proposed California mandates bills and is listed among Defeat the Mandates rally's partners and sponsors. Paul Alexander, a former official in President Donald Trump's Health and Human Services Department, is listed as the Unity Project's chief scientific officer and often rallied convoy members at the speedway.

As the People's Convoy traveled across the country and rallied in Hagerstown, it claimed to have amassed more than $1.7 million in donations. That was collected by the American Foundation for Civil Liberties and Freedom, which launched last year and has named as its executive director a Texas woman who authorities allege violated the terms of her community supervision after pleading guilty to felony fraud and exploitation charges in 2020, The Washington Post has reported.

About 90% of the donations were from small donors — people hearing about the convoy online, through news or friends — with most financial contributions totaling $1,000 or less, said Christopher Marston, who is listed in the foundation's incorporation paperwork as its president, secretary and treasurer.

When traveling across the country, he estimated fuel costs were about $50,000 to $70,000 a day. While stationed in the region, Marston said daily fuel costs were less, about $30,000. There are also other costs associated with the convoy, he said, such as lodging, renting the speedway and security.

The convoy's website includes fuel reimbursement instructions for drivers on days the group traveled in the Washington region. At the speedway, drivers were also given gift cards and letters sent from supporters.

Marston said drivers have recognized that the protest is a "marathon and not a sprint," with truckers rotating through the demonstration, leaving to work and earn money and then return.

While Marston was unable to say exactly how much money the People's Convoy has spent or what remains for the trip out West, he said "there's definitely enough to convoy back." He said donations and expenses slowed once the convoy arrived in Hagerstown, but that he hopes the truckers hitting the road will garner more attention and donations.

"The convoy needs to raise its profile and get back on the road and, you know, get back on the news," Marston said. "It's hard for the American people to get excited around driving around a Beltway."