1950 Census data to be unveiled Friday, after 72 years under wraps On April 1, 1950, an army of 140,000 census enumerators, equipped with fountain pens and government forms, started fanning out across the country to paint a portrait of the United States.

Knocking on doors, asking questions about marriage, divorce, race and income, they gathered the personal details of life for 151 million Americans who had just emerged from an era of cataclysmic war and economic depression.

And after they finished a month later, abiding by a rule that required privacy, they locked the results away for 72 years.

Early on Friday, that time will have elapsed and the National Archives will unveil a huge batch of the intimate details from the 1950 Census — on 6.4 million pages digitized from 6,373 microfilm census rolls.

The data will include names, ages, addresses and answers to questions about employment status, job description and income.

The information is expected to be available and searchable online after the release at 12:01 a.m. Friday, officials said.

It's a "beautiful snapshot in time," said Crista Cowan, corporate genealogist with the website Ancestry.com.

"The 1950 Census is this really important opportunity for people to reconnect with a part of their past," she said. "It captures what was happening in [a] household, what was the construction of the family."

It should be a gold mine for scholars and genealogists, the Census Bureau says, and will provide a fascinating look at America at the midpoint of the 20th century. 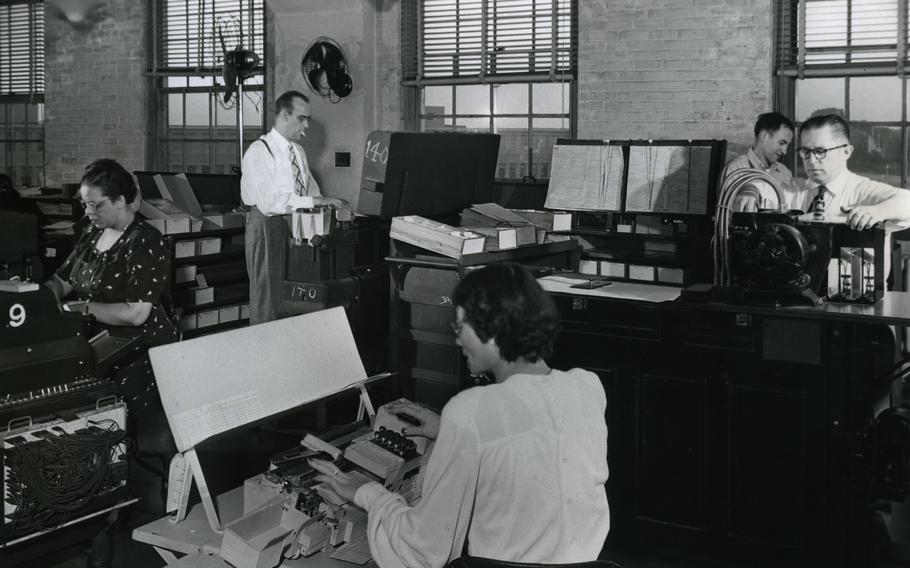 The 1950 census being tabulated. (National Archives )

"Typically people interested in their family history are always looking at dead people," she said Tuesday. "This [census] collection includes many people who are currently alive today . . . so there's a huge nostalgia component."

An estimated 26 million Americans living in the country in 1950 are still alive, according to MyHeritage.

People who were babies when counted in 1950 are, if still living, now in their 70s. Their parents, perhaps recently married in 1950, are likely deceased. But they will all be there, captured that April.

The 72-year time limit appears to have been designed to protect the private information of people mentioned in the census. It was not necessarily the length of a supposed life span, the Archives says. And it is not certain why the number 72 was selected.

"They never really come straight out and say what the reason is," Cooke said of the government records covering the issue.

But reams of statistical information from the census were not subject to the rule and were used to generate dozens of government reports.

The United States was a nation on the verge of change — "one of the most transformative periods in modern American history," Marc Perry, a senior demographer at the Census Bureau, said during a recent webinar.

In Washington, for example, only 28% of households had a TV, according to the statistical data gleaned from the census. But 97% had a radio.

Many homes were still heated with coal. Seven-thousand dwellings in the District of Columbia had no bathtub or shower.

More than 3,000 homes in Washington still had no electric lights.

And in neighboring Prince George's County, Md., more than 3,500 dwellings had no running water.

In many ways, the census that year — only three months into 1950 — was a look back. World War II had been over only three-and-a-half years, and the Great Depression had ended only a decade earlier.

"With little housing construction during the prior two decades, the nation's population mostly lived in cities and rural areas, often in crowded conditions," he said. In Washington, 52,000 dwellings consisted of only three rooms.

"Suburbanization had only recently begun." he said. And, although there were 28 million children under the age of 10, the population "baby boom" — 1946 and 1964 — was just getting underway.

Since then, the nation's geographic population center had been moving steadily westward. In 1950, it was outside Olney, Ill., 150 miles southwest of Indianapolis. As of 2020, it was about 300 miles west of Olney near Hartville, Mo.

It was a country still largely without air conditioning. Most working-age women — roughly 70% — were not in the workforce. Almost 90% of family households were married couples. Few people lived alone, only 9% of households, according to Perry, of the Census Bureau.

Perhaps the biggest focus of the 1950 Census was on how people were making a living, said Cooke, the genealogist: "How industry was changing, how the financial picture of the country was changing post-World War II."

The enumerators went out armed with the fountain pen they were required to have and a two-sided form, 19-by-22 inches, called P1, a "Census of Population and Housing."

It was printed in green letters on a white background. Ten million copies were produced, according to census records. Enumerators were sent to visit people wherever they lived or were staying — homes, apartments, hotels, Indian reservations, boats, tents and railroad cars.

(Native Americans on reservations were asked on a separate form if they were "full blood, half to full, quarter to half, less than 14." They were also asked if in 1949 they had participated in or attended "any native Indian ceremonies.")

The front of the P1 form asked the personal questions whose answers make up Friday's release.

The back of the form asked the occupants questions about housing — running water, toilets, bathtubs, radios, televisions, electric lights and refrigerators.

The tantalizing answers to those questions were mined only for statistics. The backs of the forms were not microfilmed and "were not retained," according to the Archives.

"After the Census Bureau made microfilm copies, they often destroyed the originals," the Archives said in a blog post in February.

Sharon Tosi Lacey, the Census Bureau's chief historian, said: "We don't 100 percent know why. But my suspicion is it was a time and money issue. Millions and millions of records are expensive to microfilm and take a lot of time, and they just processed the fronts."

The 1950 enumerators were cautioned not to discuss politics or "controversial matters" with people being questioned.

But they were advised to be firm.

"Act as though you expect the required information to be furnished," an instruction manual stated. "Avoid argument or prolonged discussion with the respondent."

And "in no instance should you lose your temper, or engage in disputes or threats," the manual said.