Pentagon: Russians change focus of war on Ukraine, some troops leave attack on Kyiv to regroup 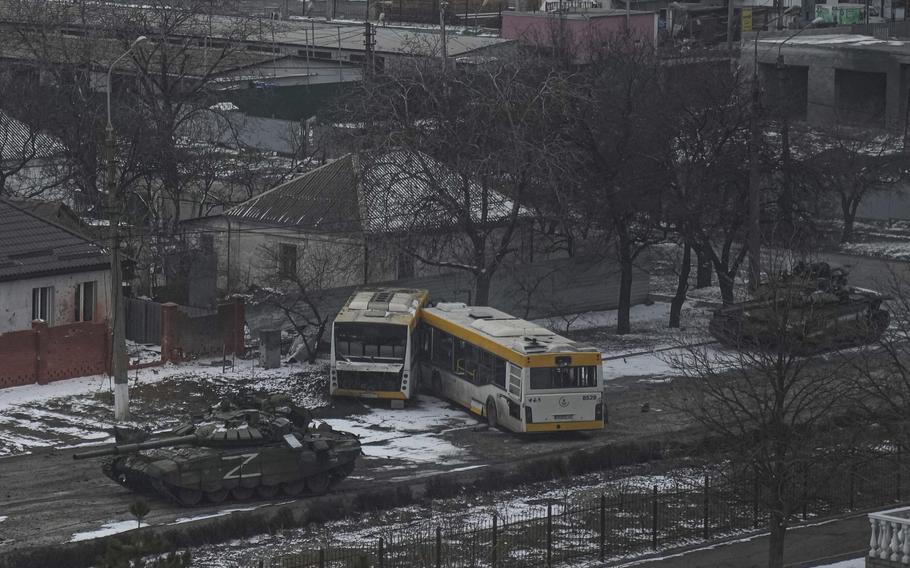 Russian’s army tanks move down a street on the outskirts of Mariupol, Ukraine, on Friday, March 11, 2022. (Evgeniy Maloletka/AP )

WASHINGTON — The U.S. believes some Russian troops who have been part of the attack on Kyiv for weeks have begun leaving the region to resupply and regroup for a possible new mission in Russia’s war on Ukraine, chief Pentagon spokesman John Kirby said Wednesday.

The withdrawal began after Russian officials on Tuesday claimed they would pull back attacks on Ukraine’s capital city, Kirby said. However, remaining Russian troops in the region continued launching artillery rounds at Kyiv on Wednesday, he said.

“We’ve seen none of them reposition to their home garrisons, and that's not a small point,” Kirby said. “If the Russians are serious about de-escalating — because that's their claim here — then they should send them home.”

The withdrawing Russians had been staged northwest of Ukraine near the Hostomel Airport about 20 miles from Kyiv, he said. The U.S. believes the troops will move north to Belarus, where they could load up on supplies for a return to Ukraine.

“It's our assessment that their intention is to reposition these units so that they can refit them for future operations … inside Ukraine," Kirby said.

He said the troops who withdrew made up less than 20% of the force attacking Kyiv. However, he would not say how many Russian troops were engaged in the attack on the city.

The Russians are maintaining two lines of advance toward the city. The deepest penetration by Russian forces reached about 9 to 12 miles from Kyiv’s city center as a stiff Ukrainian resistance has kept them at bay, Kirby said.

Still, the fighting continues throughout Ukraine, and Russia continues to make some of its most successful advances in the south, he said.

For example, Russian troops are “very, very close” to the center of Mariupol, a port city that would offer Russia strategic advantages due to its location on the Sea of Azov, Kirby said. Much of Mariupol’s civilian infrastructure, such as hospitals and residential buildings, has been destroyed after weeks of Russian attacks.

"The town is just being shellacked with airstrikes and bombardment," Kirby said. “The place is just being decimated from a structural perspective by the onslaught of Russian airstrikes."

In the days ahead, the U.S. expects to see more Russian troops “going in the direction of Donbas, as they say they will do,” he said.

Since the war began Feb. 24, the U.S. has maintained Russian President Vladimir Putin aims to take Kyiv and supplant Ukraine’s president with a pro-Russian government. However, Russian officials on Tuesday claimed the conflict was instead meant to “liberate” the eastern Ukrainian region of Donbas -- home to the separatist cities of Donetsk and Luhansk.

Kirby on Tuesday rebuffed the Kremlin’s claims, pointing to the months of mounting aggression Putin displayed even before invading Ukraine.

“The intensified rhetoric over the last year and in the lead-up to Russia's invasion demonstrated that the Kremlin's real intent was to overthrow the democratically elected government and to occupy or annex large portions of Ukraine,” he said.

Further, Kirby said the claims could be Russia’s attempt to save face after failing to capture Ukraine’s capital city despite spending nearly 5 weeks trying to advance on the city.

“The Russian Ministry of Defense's recent talking points may be an effort to move the goal posts, moderating Russia's immediate goals and spinning its current lack of progress as part of what would be next steps,” he said.

Kirby predicted the U.S. intelligence community will study “how Russia underperformed and how, quite frankly, amazingly the Ukrainians have performed,” noting some of their success could be attributed to their years of training with American forces.

"Let's not forget the training and support that we have been giving the Ukrainians for the last 8 years as they've been engaged in a hot war in the Donbas,” he said. “Their success [against Russia] is not an accident. It's the result of a lot of hard work over the last 8 years."

Also affecting the outcome has been the continued donation of military aid by the U.S., Kirby said, which includes weapons such surface-to-air missile systems used against Russia during the five weeks of war.

President Joe Biden discussed the topic with Ukraine President Volodymyr Zelenskyy in a phone call Wednesday, according to the White House. Biden has promised $2 billion in military equipment and supplies to Ukraine since he took office in January 2021.

“The leaders discussed how the United States is working around the clock to fulfill the main security assistance requests by Ukraine, the critical effects those weapons have had on the conflict and continued efforts by the United States with allies and partners to identify additional capabilities to help the Ukrainian military defend its country,” the White House said.