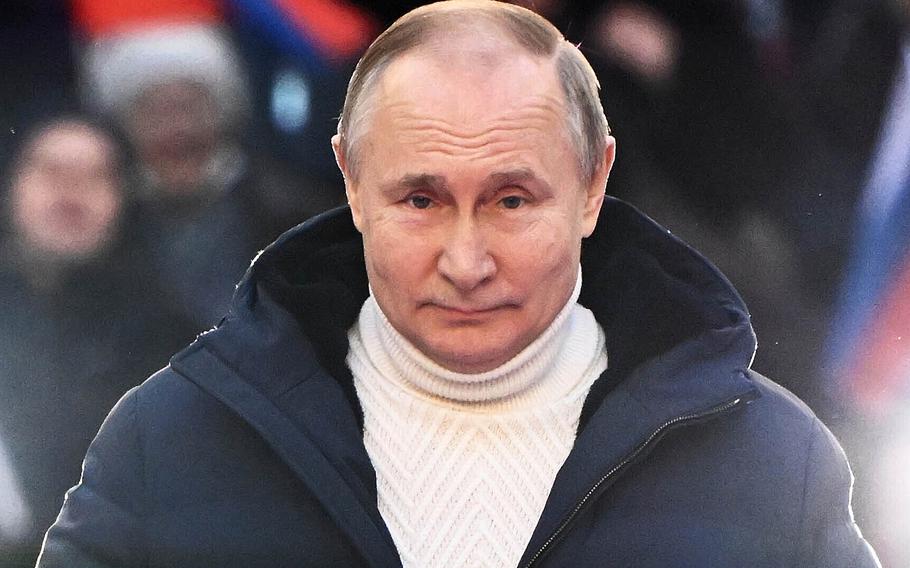 Russian President Vladimir Putin delivers his speech at a concert marking the eighth anniversary of the referendum on the state status of Crimea and Sevastopol and its reunification with Russia, in Moscow, Russia, Friday, March 18, 2022. (Sergei Guneyev/Sputnik Pool Photo via AP)

The Kremlin breached its international obligations by raising nuclear tensions amid the war in Ukraine, according to a top U.S. arms control official, pushing some countries to reassess their dependency on Russia for atomic fuel and technology.

Bonnie Jenkins, under-secretary for arms control and international security at the State Department, said the U.S. is ready to help allies in Eastern Europe escape their reliance on Moscow.

“We have obligations under the Non-Proliferation Treaty and threatening non-nuclear weapons states isn’t something that a nuclear weapons state should be doing,” Jenkins said in an interview at the International Atomic Energy Agency in Vienna. “This saber rattling is certainly not good. There were no threats made against Russia.”

Just two days after Vladimir Putin’s troops invaded Ukraine, he put Russian nuclear forces on a “special regime of combat duty,” following a warning that any nation that interfered with the invasion would suffer “consequences that you have never experienced in your history.”

The unprecedented public warning forced security analysts to reassess some long-held assumptions about the stability of the global security landscape.

American officials signaled growing alarm that as his war in Ukraine fell behind its objectives, Putin might escalate rather than back down, raising the specter of blanket bombing of Ukrainian cities and the use of weapons of mass destruction, including chemical and biological arms.

The U.S. said last week it’s working with North Atlantic Treaty Organization partners to mitigate the risk of a potential nuclear incident linked to the Kremlin’s invasion. The presence of Russian troops at Ukrainian nuclear facilities, along with the bombing of a U.S.-backed atomic laboratory and waste depots has increased that probability, according to American officials.

“People are concerned right now about what Russian troops are doing at Ukraine facilities,” said Jenkins, who was in the Austrian capital for an IAEA nuclear-security meeting. She urged the Kremlin to “deescalate the language” it’s using to make atomic threats.

IAEA Director General Rafael Mariano Grossi traveled to Ukraine on Tuesday for consultations over the safety and security of the country’s 15 nuclear power reactors. The month-long war has put “facilities with radioactive material in unprecedented danger,” the Argentine diplomat said in a statement.

Jenkins said the change in Russia’s nuclear posture violated its responsibilities as a permanent member of the United Nations Security Council. The Kremlin’s aggression against civilian nuclear facilities in Ukraine has also exposed weaknesses in the catalog of international nuclear safety and security rules, she said.

Consequences of the war are already rippling beyond Ukraine’s borders and into neighboring countries that find themselves hooked on Russian nuclear technology and fuel, Jenkins said. State-controlled Rosatom Corp. -- the world’s biggest supplier of nuclear fuel and reactors -- is the object of potential U.S. sanctions. It powers more than a dozen reactors in central and eastern Europe and is building new ones across Asia and in the Middle East.

“This is something they’re starting to think about,” said Jenkins, who cautioned that switching from Rosatom “isn’t something that can happen overnight. This is going to require planning and a strategy on their part to make it happen.”

In the years leading to the Ukraine war, the U.S. enabled Ukraine to weaken Rosatom’s grip on its nuclear fuel market. The Department of Energy worked with Westinghouse Electric Co. to replicate fuel assemblies and optimize Ukrainian reactors.

The partnership ended decades when Ukrainian utilities were hostage to a single supplier. It’s set to gain even greater traction as countries from Bulgaria, to Slovakia to the Czech Republic weigh looking for new sources of fuel.

“If they approach us, I think we would have a conversation about that,” Jenkins said. “We recognize that this is an issue. It’s an opportunity to work with other countries.”