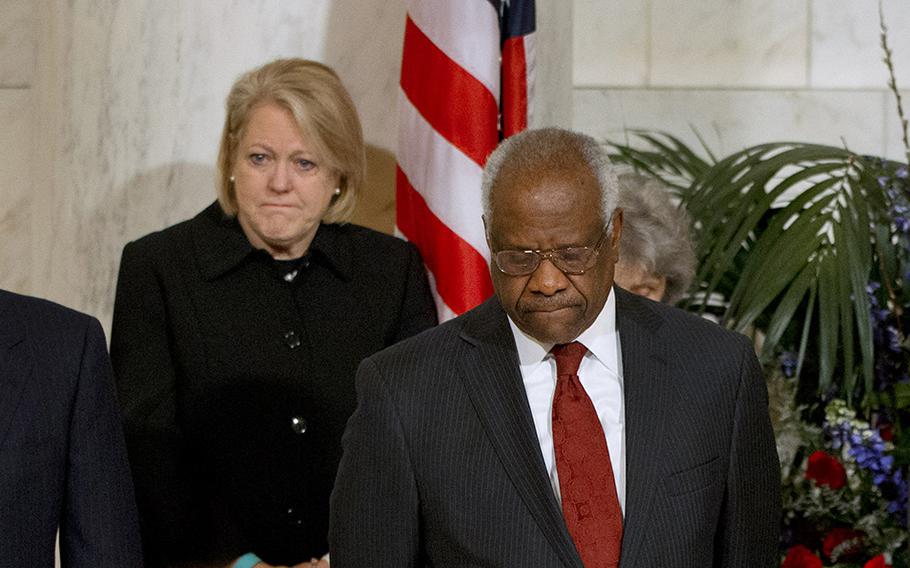 WASHINGTON — The House select committee investigating the Jan. 6, 2021, insurrection will seek an interview with Virginia Thomas, a conservative activist and wife of Supreme Court Justice Clarence Thomas, according a source familiar with the investigation.

Virginia Thomas, who goes by Ginni, has drawn scrutiny for her text messages to White House Chief of Staff Mark Meadows in which she repeatedly pressed Meadows to work aggressively to overturn the election and keep former president Donald Trump in power in a series of urgent exchanges in the critical weeks after the vote, according to copies of the messages obtained by The Washington Post and CBS News.

The messages — 29 in all — reveal an extraordinary pipeline between Ginni Thomas, a conservative activist, and Trump’s top aide during a period when Trump and his allies were vowing to go to the Supreme Court in an effort to negate the election results.

The committee’s plans to ask Thomas for an interview were first reported by CNN. A source familiar with the investigation who spoke on the condition of anonymity to discuss internal committee plans confirmed the report.

In a series of text exchanges with Meadows, Thomas sought to influence former president Trump’s strategy to overturn the election results and lobbied for lawyer Sidney Powell to be “the lead and the face” of Trump’s legal team. Thomas’s repeated outreach to Meadows came at period when Trump and his allies sought to enlist the Supreme Court to negate the results of the election. The revelations of his wife’s texts have drawn calls from Democrats urging Clarence Thomas to recuse himself from cases related to the 2020 election.

Separately, the committee is poised to vote Monday night on holding two former Trump aides in criminal contempt of Congress for refusing to comply with the committee’s subpoenas.

The committee will meet Monday night to consider a report recommending holding former trade and manufacturing director Peter Navarro and former communications chief Daniel Scavino Jr. for criminal contempt of Congress. If the committee approves the matter, the House would vote on whether to refer Navarro and Scavino to the Justice Department for prosecution.

The bipartisan Jan. 6 panel is investigating the 2021 storming of the U.S. Capitol by a pro-Trump mob that tried to stop the confirmation of Joe Biden’s electoral college win, an attack that led to five deaths and left some 140 members of law enforcement injured.

The committee subpoenaed Scavino, along with several other former Trump advisers, last September, but an attorney for Trump instructed the group not to comply with congressional investigators. Trump’s legal team tried to argue that the former aides were protected by executive and other privileges, but President Biden rejected the executive privilege claims last month.

In a report filed Sunday night, the bipartisan committee said Scavino not only worked as a White House official, “he separately promoted activities designed to advance Mr. Trump’s success as a presidential candidate. He continued to do so after the 2020 election, promoting activities designed to reverse the outcome of a lost election.”

“Mr. Scavino reportedly attended several meetings with the President in which challenges to the election were discussed,” the committee wrote in its report. “Mr. Scavino also tracked social media on behalf of President (Donald) Trump, and he did so at a time when sites reportedly frequented by Mr. Scavino suggested the possibility of violence on January 6th.”

Last month, the committee subpoenaed Navarro, who has written about and publicly discussed the effort to develop a strategy to delay or overturn certification of the 2020 election.

In a statement on March 27, Navarro said that “the Select Committee’s witch hunt is predicated on the Big Lie legal premise of a partisan Appeals Court that Joe Biden can waive Donald Trump’s Executive Privilege. The Supreme Court will have none of that when the time comes — as it surely will — and the DOJ knows such nonsense would gut Executive Privilege and the critical role it plays in effective presidential decision making.”

In his statement, Navarro suggested that the committee investigate House Speaker Nancy Pelosi, D-Calif., and the Pentagon, and examine whether FBI informants instigated the pro-Trump mob that stormed the Capitol, a widely debunked claim.

Scavino did not immediately respond to efforts to reach him Monday.

Scavino and Navarro are among the latest high-profile Trump White House officials facing repercussions for refusing to comply with the Jan. 6 committee’s subpoenas. Last year, former Trump adviser Steve Bannon was indicted on charges of contempt of Congress, which prompted warnings from some Republicans of “payback” that they could do the same to Democrats if they retake control of the House majority in November.

Meadows, the former chief of staff in the Trump White House, also refused to cooperate with the committee, leading to the House voting to hold him in contempt of Congress as well in December.

The Jan. 6 committee’s legal battles in its effort to subpoena records that would help committee members investigate the insurrection have not been limited to individuals. Earlier this month, the Republican National Committee filed a lawsuit against the Jan. 6 committee seeking to block the panel’s subpoena of data from Salesforce, an RNC software vendor.

In its subpoena of Salesforce, the Jan. 6 committee said it needed performance metrics and analytics related to Trump’s campaign to investigate whether Trump and the RNC used the software vendor’s platform to disseminate false statements about the 2020 election, citing evidence that many rioters were motivated by those false claims. The RNC’s lawsuit argued that the request went beyond the scope of the congressional committee’s subpoena power.