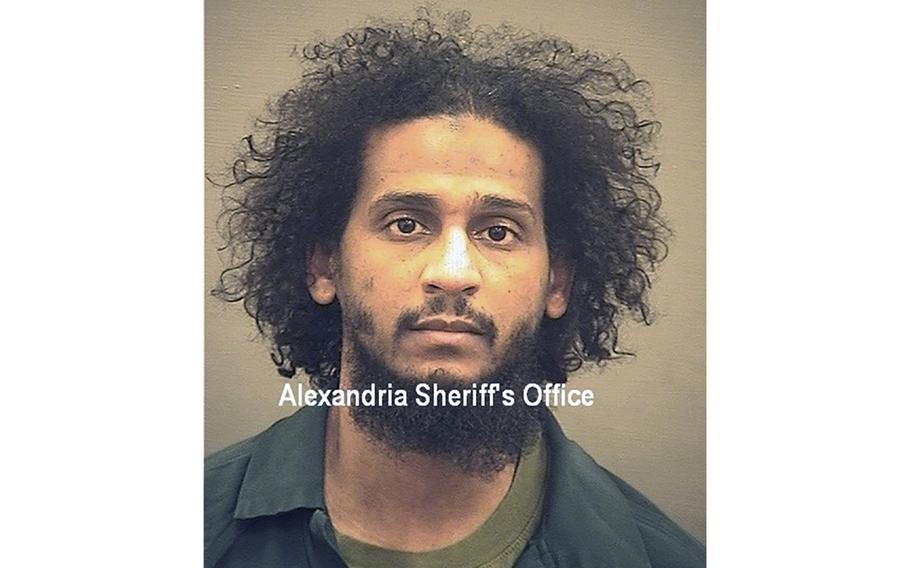 El Shafee Elsheikh stands accused of taking part in the capture and murder of journalists and aid workers by the Islamic State. (Alexandria (Va.) Sheriff’s Office)

The only trial in U.S. court for a member of an infamous terrorist cell is set to begin Tuesday, as El Shafee Elsheikh stands accused of taking part in the capture and murder of journalists and aid workers by the Islamic State.

Elsheikh, 33, was one of four ISIS militants who traveled to Syria from London and whose British accents led prisoners of the terrorist group to label them "The Beatles." Some of those prisoners were released in exchange for ransom money from foreign governments. When countries would not pay, their hostages were slain - some beheaded on videos that were broadcast around the world.

He is in Alexandria federal court because of the deaths of four Americans who were reporting on or supporting victims of the Syrian civil war - journalists James Foley and Steven Sotloff and aid workers Peter Kassig and Kayla Mueller. Prosecutors say he is also implicated in the deaths of British, Japanese and Norwegian captives.

Mohamed Emwazi, a member of the cell who was known as "Jihadi John" before he was identified, killed many of those prisoners himself, on camera, while taunting Western leaders. He died in a drone strike in 2015. The other three guarded the hostages and handled ransom negotiations. One, Aine Davis, was convicted at trial in Turkey after denying any connection to ISIS. Elsheikh and his friend Alexanda Kotey were captured by Kurdish forces in 2018 and handed over to American authorities. Kotey pleaded guilty last year, in exchange for the chance to serve part of his sentence in the United Kingdom.

"I had no doubt that any failure of those foreign governments to comply with our demands would ultimately result in either the indefinite detention of those foreign captives, or their execution," Kotey said at his plea hearing in federal court in Alexandria.

A Canadian ISIS leader who narrated some of the execution videos has also pleaded guilty in Alexandria.

The Islamic State started taking hostages in Syria in late 2012, as fighters moved across the border from Iraq to take advantage of its neighbor's civil war. Foley, a 39-year-old teacher-turned-journalist from New Hampshire, was reporting on that conflict with British photographer John Cantlie. Both were freelancers who embraced working in dangerous territory and both had been kidnapped before. This time, they were taken together, from a taxi headed to the Turkish border. According to GQ Magazine, one of their captors was a man they had spoken to briefly at a nearby Internet cafe - Emwazi, who they would come to know as "John."

Over the next two years, more hostages were taken. Sotloff, a 30-year-old Middle East reporter from Miami, was kidnapped on the way to Aleppo the same day in 2013 that human rights activist Mueller, about to turn 25, was abducted leaving a hospital in that city. Peter Kassig, a former Army Ranger who converted to Islam and changed his name in captivity to Abdul-Rahman, was captured months later on his way to deliver food and medical supplies to refugees in eastern Syria.

By that point, the Obama administration had tried and failed to rescue the hostages based on information from European captives who had been released.

Foley was killed first, in an August 2014 video, followed by Sotloff, two British aid workers, and Kassig. Cantlie, who went on to appear in several ISIS propaganda videos, was never located; in 2019 the British government said he could still be alive. Militants sent Mueller's family a photograph of her body in 2015; it was not clear when she died.

Emwazi was implicated in the deaths of Foley, Sotloff, and the British aid workers David Haines and Alan Henning.

After her son's death, Diane Foley became an advocate for the killers to face trial in federal court and for the U.S. government to do better by citizens held hostage overseas.

"This accountability is essential ... if our country wishes to ever deter hostage taking," she said in a statement after Kotey's guilty plea. "Attacks on journalists are at an all-time high and our US hostage crisis is a silent epidemic, which few are aware of."

The White House now has a special envoy for hostage affairs, a position that did not exist when the hostages were killed by the Islamic State.

Prosecutors plan to play clips at trial of media interviews in which Elsheikh volunteers that he solicited information from hostages and used it to seek ransoms. In an interview with The Washington Post in 2019, Elsheikh admitted that his behavior toward the hostages "was not always - being older now and understanding a lot more about religion - was not always in line, or in tone with, what is incumbent on me" as a Muslim. He said he lacked "compassion" and saw harsh treatment of Westerners as "tit for tat."

Elsheikh also maintains he was tortured by Kurdish forces into making false statements about his actions.

Prosecutors also plan to call as a witness a Yazidi woman who was held with Mueller. Unlike the other American victims, Mueller's death was not filmed, and her remains have never been located. And they will likely show videos of the deceased hostages and messages between their families and the captors.

In an intelligence briefing with officials from the Department of Defense shown at an earlier court hearing, Elsheikh said he personally contacted the Norwegian and Japanese consulates to negotiate ransoms for three hostages who were ultimately executed.

Elsheikh was born in Sudan and raised in London with his mother and two brothers. In a 2016 interview with The Post, his mother, Maha Elgizouli, said that for most of his life, her son was a regular Londoner and a "perfect" child. He spent three years in the Army Cadet Force, a military-backed youth group - an experience he would reference in an interview with the BBC after his capture. He cheered for a local soccer team and worked as a mechanic.

But as he got older, family friends said, he grew angrier. His brother had been sentenced to 10 years in prison for his role in a deadly dispute; his Canadian wife was blocked from entering the United Kingdom. He fell under the influence of a radical West London imam. Elsheikh went to Syria in 2012 and his younger brother, Mahmoud, joined him a few years later. Mahmoud was later killed fighting for the Islamic State in Iraq.

"That is not the son I raised," Elgizouli said when she learned Elsheikh was one of the hostage takers.

But she fought for him to be tried in Britain rather than the United States, a legal battle that led American authorities to agree that he would not face the death penalty. Instead, if convicted, he will face a mandatory life sentence. The trial before U.S. District Judge T.S. Ellis III is expected to last four weeks.