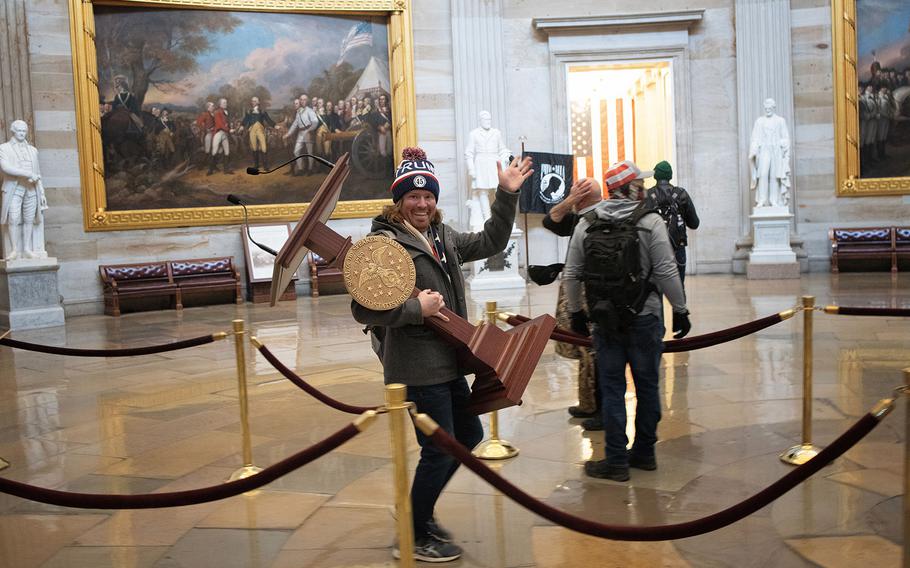 Adam Johnson carries the lectern of U.S. Speaker of the House Nancy Pelosi through the Rotunda of the U.S. Capitol in Washington, D.C. , during the Jan. 6, 2021, riot. Johnson, who was sentenced to 75 days in prison for his part in the riot, had planned a celebratory going away event in his honor, but a Florida restaurant where the gathering was to take place canceled the April engagement when they learned of its purpose. (Win McNamee/Getty Images/TNS)

BRADENTON, Fla. (Tribune News Service) — A Florida waterfront restaurant has foiled plans for a celebratory send-off of a man who participated in the Jan. 6, 2021, Capitol riot.

Adam Johnson invited friends to celebrate his “last Friday of freedom” at Caddy’s in Bradenton, Florida, on April 7, according to a Facebook event page. The party event features a viral photo of Johnson holding a podium belonging to House Speaker Nancy Pelosi in the Capitol rotunda on Jan. 6. Johnson pleaded guilty to federal misdemeanor charges of entering and remaining in a restricted building. He was sentenced to 75 days in prison followed by one year of supervised release in February. Johnson must also complete 200 hours of community service and pay a $5,000 fine.

In a post on his Facebook event page, the 36-year-old jokingly encouraged attendees to bring “shivs, files, and phone cards” to help send him off before going to prison for the “lamest charge in history.”

The page shows that 41 people RSVP’d to Johnson’s celebration, while another 42 were “interested.”

After local media outlets reported on Johnson’s “going to prison” celebration, the restaurant canceled the event.

A person who answered the phone at the restaurant and identified themself only as a host on Friday said that the event had been canceled. Representatives for the Caddy’s restaurant chain and its parent company, the Sun Pubs Investment Group, did not immediately respond to requests for comment.

Johnson is not the first rioter to make headlines for statements or events made before incarceration. Last December, Texas real estate agent Jenna Ryan said on TikTok that she planned to “do a lot of yoga and detox” during her 60-day sentence, and other rioters on house arrest were cleared by judges to travel or attend neighbors’ parties during the 2021 holiday season. At least 800 people have been charged with crimes related to the riot, and at least 213 have pleaded guilty.