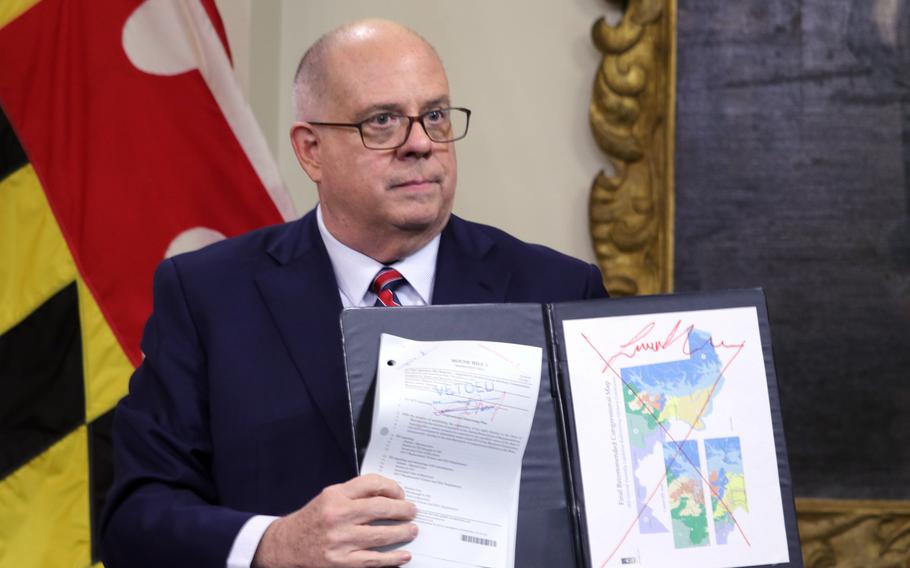 Maryland’s Republican Gov. Larry Hogan on Dec. 9, 2021, in Annapolis, Md., shows a copy of the redrawn congressional map approved by the General Assembly that is crossed out in red, during a briefing in which he announced his veto of the plan, A Maryland judge ruled Friday, March 25, 2022, that the state’s new congressional map is unconstitutional. (Brian Witte/AP)

A Maryland judge has thrown out the state's congressional map, calling it an "extreme partisan gerrymander" in what is a victory for Republicans who said Democrats in the state General Assembly sought to silence their votes.

The ruling Friday by Anne Arundel County Senior Judge Lynne A. Battaglia marks the first time in Maryland history a judge has found a congressional map violated the state constitution, deciding that it violated rules laid out in Maryland law traditionally applied to legislative districts requiring them to be compact and to give regard to political subdivisions. She also ruled that the map in turn violated the state constitution's equal protection, free speech and free elections clauses.

She said the weight of the evidence "yields the conclusion that the 2021 Congressional Plan in Maryland is an 'outlier,' an extreme gerrymander that subordinates constitutional criteria to political considerations."

Battaglia enjoined the map from being used in this year's primary and general elections in Maryland and ordered the General Assembly to redraw the map by March 30 - a furious deadline for what has often been a weeks-long process.

A spokeswoman for the Maryland Attorney General's Office said the office is still reviewing the decision and that it had not made a decision about whether to appeal.

Maryland Gov. Larry Hogan, a Republican, called the ruling "a monumental victory for every Marylander who cares about protecting our democracy, bringing fairness to our elections, and putting the people back in charge."

The governor encouraged the General Assembly to the adopt the maps drawn by his citizen advisory committee, which the legislature previously rejected.

"This is an historic milestone in our fight to clean up the political process in our state, and ensure that the voices of the people we are elected to serve are finally heard," he said.

Battaglia had anticipated during the trial that the case would likely head to the Maryland Court of Appeals, as this summer's primary elections fast approach. And its final outcome could have big consequences in the midterm elections both for Maryland and nationally as Democrats' majority in Congress hangs by a thread.

"To call this a big deal would be the understatement of the century," the statement read. "Judge Battaglia's ruling confirms what we have all known for years - Maryland is ground zero for gerrymandering, our districts and political reality reek of it, and there is abundant proof that it is occurring. Marylanders have been fighting for free and fair elections for decades and for the first time in our state's shameful history of gerrymandering, we are at the precipice of ending it."

Battaglia joins a growing cohort of state judges across the country who have been willing to take on partisan gerrymandering after the U.S. Supreme Court in 2019 said federal courts were not the proper avenue for those challenges. In the battle for control of Congress this November, both parties have used partisan gerrymandering to try to maximize their chances of winning the majority. But in high-stakes legal challenges, some state judges have put up roadblocks. State high courts in North Carolina and Pennsylvania have thrown out maps they found impermissibly advantaged Republicans, while several other cases are pending.

In this case, Republican plaintiffs had argued that the congressional map - which passed the General Assembly on an overwhelming party-line vote in December - violated the Maryland Constitution's protections of free speech, free and frequent elections and its equal protection clause by suppressing the strength of Republican voters.

Throughout the trial, witnesses for the Republican plaintiffs presented evidence that they said showed partisanship was the "dominant" consideration of map-drawers. Sean Trende, an elections analyst at RealClearPolitics, said the trend that he observed is that map-drawers apparently intended to "crack" the strength of Republican voters by spreading them out in heavily blue districts, where they are not likely to affect the outcome of an election. For example, map-drawers took Republican voters in Harford County out of the 1st District and put them in the blue 3rd District - while carving out blue Harford precincts near the Chesapeake Bay and keeping them in the 1st.

"It was plainly drawn with an intent to hurt the Republican Party's chances of electing anyone in Congress," said Trende, who most recently served as a special master tapped by the Virginia Supreme Court to redraw its congressional and legislative maps.

Battaglia found Trende's testimony convincing, agreeing that "Republican voters and candidates are substantially adversely impacted by the 2021 Plan." But she said Maryland did not show it had any "compelling interest" to rationalize those adverse effects on Republicans.

The Maryland Attorney General's Office repeatedly argued that the state constitution's provisions laying out criteria for legislative districts - that they should be compact and give regard to natural boundaries and political subdivisions - only applied to state legislative districts, not congressional. They also pointed out that there is nothing in the Maryland Constitution that forbids map-drawers from making political considerations when drawing maps, and that there is no way to determine if partisanship in a map is "extreme."

Battaglia acknowledged on numerous occasions that that was the heart of the case - how much partisanship is too much?

She was not persuaded by the state's expert witnesses who argued legislators were free to make political considerations and that this map was not a partisan gerrymander.

Allan Lichtman, a history professor at American University, pointed in part to the fact that if Democrats in the General Assembly "were intent on destroying a Republican district, they could have done that - but they didn't." While Biden would have won Harris's district by just under 1 percentage point in 2020 under the new lines, Lichtman and others anticipate it still favors Harris. Lichtman said it is "instructive" that the General Assembly chose not go further to make the 1st District safer for a Democrat.

"Isn't that a little bit like arguing because they didn't steal $100,000, they didn't steal $50,000?" Robert Popper, an attorney with the legal activist group Judicial Watch representing Republican plaintiffs, retorted during cross-examination.

Battaglia, citing a past ruling, noted that political considerations are valid but cannot trump constitutional requirements - and in this case, she said, that is what happened.

If the state does appeal and Battaglia's ruling stands, that could upend how the Democratic-controlled General Assembly draws congressional maps in the future, possibly imposing new restraints that have never existed.

Maryland Democrats have often used their partisan advantage in the State House to draw maps favoring Democrats, and have admitted in past litigation to drawing the 2011 map to make it hard for a Republican to be elected in Maryland's western 6th Congressional District. A federal judge famously remarked that the 2011 maps' 3rd Congressional District resembled a "broken-winged pterodactyl lying prostrate across the state." But partisan-gerrymandering challenges to that map did not ultimately succeed.

The state argued its 2021 congressional map is more compact than the last and that it should be credited for that - though attorneys for the Republicans scoffed that it was only better because it could not possibly be worse. Battaglia called it a "fictitious narrative."

Battaglia's short deadline for the General Assembly to redraw the map crams a huge legislative lift into the final two weeks of the Maryland General Assembly's session, when lawmakers are scrambling to figure out how to dole out $350 million in tax cuts, legalize marijuana, address rising crime statewide and pass an omnibus climate change bill.

She scheduled an April 1 hearing on the General Assembly's new proposed map.

The non-partisan government transparency group Common Cause urged legislators not to leave out the public as they rush to draw a new map, reminding state lawmakers the map is not meant to serve political parties.

"The congressional map belongs to the voters of Maryland, not the politicians," Joanne Antoine, executive director of Common Cause Maryland, said in a statement. "It's time for the General Assembly to do right by the voters and lead a fair, open, and transparent process that results in fair maps."

The Washington Post's Erin Cox and Ovetta Wiggins contributed to this report.