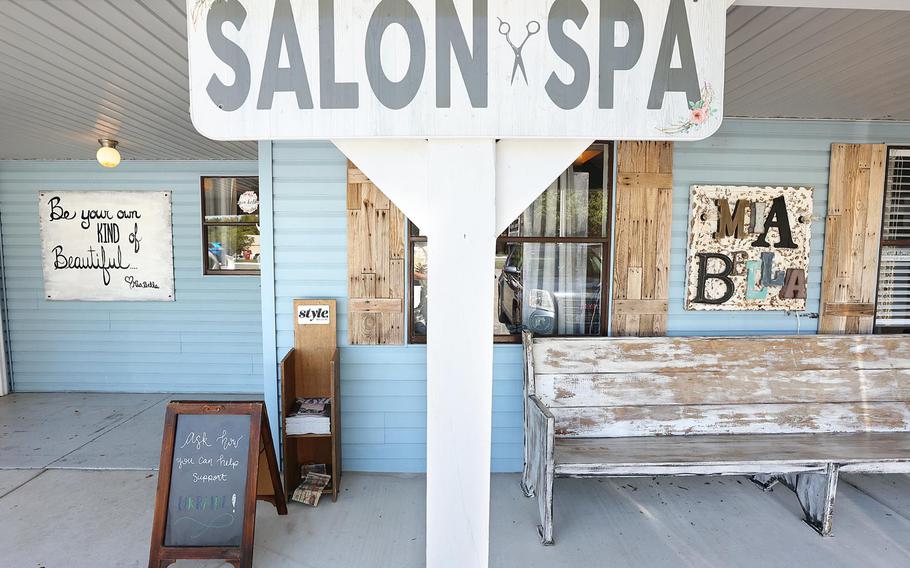 Mia Bella Salon & Spa in Fruitland Park is pictured on Tuesday, March 22, 2022. A sign outside invites customers to "Ask how you can help support Ukraine." (Stephen M. Dowell/Orlando Sentinel/TNS)

(Tribune News Service) — A thermal imaging drone used by Ukrainian forces trying to expel invading Russian troops from their borders was purchased by the clients of a salon in a small Lake County city just outside of The Villages.

Soon, nine sets of body armor will be purchased for troops there as well, with money collected at the Mia Bella Salon & Spa in Fruitland Park, population 8,000 or so.

In all, about $10,000 has been collected in roughly three weeks by the salon, which offers services from hair highlights to massages, said Dawn Coulliette, who owns the business with her daughter.

Now teaching English at a university in Lviv, Ukraine, Anderson orchestrated the purchases based on what is needed on the ground.

“Right now, this is where I feel like I can do the best,” said Anderson over a video call Tuesday. He said air raid sirens had sounded earlier throughout the city, as they do most days. 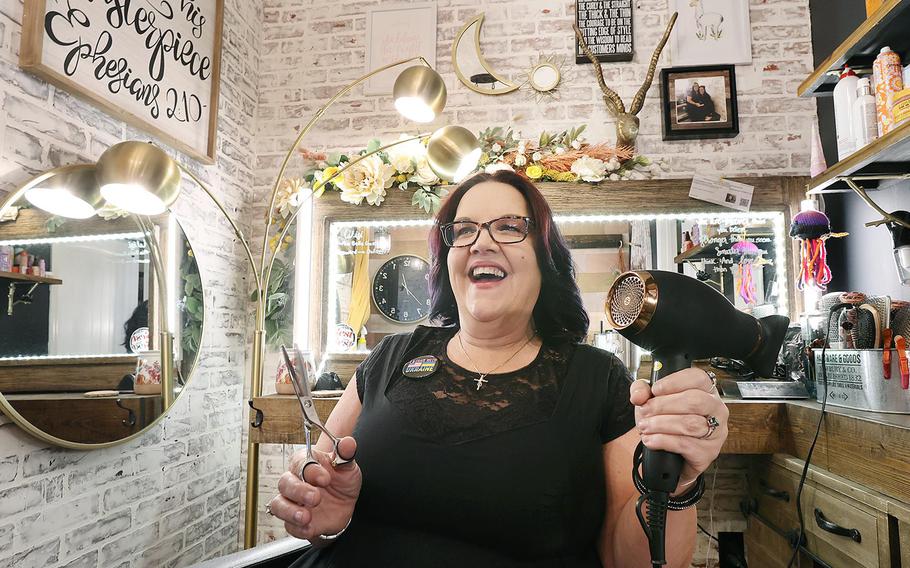 Dawn Coulliette, owner of Mia Bella Salon & Spa in Fruitland Park, is pictured at her business on Tuesday, March 22, 2022. So far, shes purchased a military drone, and is about to buy nine sets of body armor for the Ukrainian military. (Stephen M. Dowell/Orlando Sentinel/TNS)

When Russia started its invasion of Ukraine Feb. 24, Anderson decided to stick around. Millions of Ukrainians left, as troops invaded and bombarded cities with missile strikes and artillery fire.

President Joe Biden on Feb. 11 warned Americans to leave Ukraine since no military evacuations were planned.

“When the war broke out I had to make that decision,” Anderson said. “I don’t know if it’s a smart move or not a smart move. Of course, I’m an American… but this has become a second home and I felt like I couldn’t abandon my friends. I wasn’t ready to leave.”

As thousands of Ukrainians took up arms, Anderson said he found other ways to help his adopted home.

He went to the Lviv train station, where thousands of people were arriving and departing to escape the shelling across the country, many on the way to Poland. There, he helped load supplies onto trains, but the station had more than enough volunteers.

So then he helped out at a warehouse, unloading and packing supplies to be distributed elsewhere in Ukraine, but that effort also had enough volunteers. He also helped make camouflage military nets.

But in recent weeks, he’s instead been coordinating the purchase of the drone and routing relief supplies sent from his family and friends in America. He said he’s expecting shipments of dozens of boxes of supplies, which will be distributed by a nonprofit throughout the country.

He found Ukrainians in Finland to purchase the drone and also has found a person to buy bulletproof vests, which will be given to soldiers, he said.

“I could buy food, but people are sending food. I’d really like to do something for the Ukrainian military,” he said.

Anderson left his job at Winter Park High School after 27 years teaching in Central Florida, disillusioned with the direction of public education in Florida, he said. As a teen, he had a dream of joining the Peace Corps, but a recruiter encouraged him to go to college and learn some skills before joining.

Decades later, he sold his home and signed up to go to Ukraine, arriving in 2016. He’s not currently a Corps volunteer.

In 2020, as COVID-19 rapidly spread, the Corps evacuated all of its volunteers around the world, and Anderson returned to Central Florida, where he lived with Coulliette in Leesburg. But he continued paying rent in Ukraine, with the intention of returning.

Months later, a university in Lviv offered him a job as a visiting professor teaching English. Classes started back up Monday and six students attended, he said. Last week, his English speaking club at a café in town had a dozen show up, where the war dominated the conversation.

Famous statues around the city of about 700,000 people have been wrapped in padding and frames of wood and aluminum, windows of renowned cathedrals are covered in metal and government buildings are blocked off with concrete barriers and chains, Anderson said.

Despite regular air raid sirens, Lviv hasn’t been subject to the regular shelling as numerous other Ukrainian population centers have been, though a missile struck the airport several miles from Anderson’s home in the middle of the night.

Anderson, 61, talks to his sister Dawn several times a week and was able to send photos of the drone when it arrived, to show her clients who helped buy it. He also sent photos it captured at night, which, he said, the military can use to help root out attacks.

She said the donors were “thrilled” with the purchase.

Coulliette, a massage therapist, said she’s talked to her clients for years about her family and specifically her brother in Ukraine.

For months, tens of thousands of Russian troops amassed on the border of Ukraine before invading on Feb. 24. Russian President Vladimir Putin has said he intended to “denazify” Ukraine, once part of the Soviet Union, and eradicate its pro-Western government in the capital city, Kyiv.

As tensions escalated, Coulliette said clients would ask about Anderson, and when the war started, texts and phone calls poured in.

Then came cash, checks and Venmo payments to help Ukraine.

“Immediately the clients I started talking to started handing me money before I could even get the jar put out and get ready to advertise that that’s what I was doing,” she said.

Coulliette said she felt a connection to the conflict in Ukraine because of her family’s ties there. Besides Anderson living there, her mom and stepfather have visited over the past three decades on mission trips with the First Baptist Church in Mount Dora, and later a thrift store called Orphan’s Rock Thrift Store, and adopted her step-sister from an orphanage there.

On a recent day outside of the salon just west of U.S. Highway 27, an A-frame sign with script lettering stood that reads “Ask how you can help support Ukraine.”

Inside, Coulliette, 58, who owns the business with her daughter Danielle Daugherty, wears a pin that reads, “I stand with Ukraine.”

“Whatever it is they need, that’s what we’ll buy,” she said. “We might be only one ant in this whole thing, but an ant can carry a lot.”