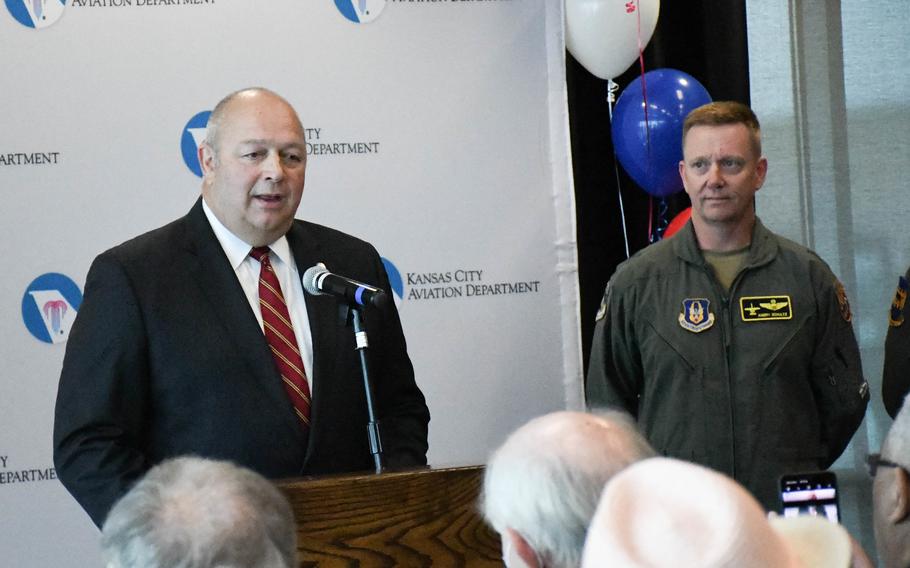 Federal Aviation Administration administrator Steve Dickson speaks at a ceremony at the Charles B. Wheeler Downtown Airport’s general aviation terminal on June 28, 2021, in Kansas City, Mo. Dickson voiced confidence during a Friday television interview in the type of Boeing plane that went down in China earlier this week. (Shelley Ecklebe/U.S. Air Force)

As search teams continued gathering wreckage and remains following Monday’s crash of a China Eastern flight, the outgoing chief of the Federal Aviation Administration voiced confidence Friday in the type of Boeing plane that went down and in the ability of the international aviation community to learn what went wrong.

FAA Administrator Steve Dickson, a retired airline pilot and Trump appointee who is stepping down next week, pointed to the strong safety record of Boeing’s Next Generation fleet of 737 passenger planes in a television interview.

The 737-800 that crashed in southern China’s Guangxi province “is one of the safest aircraft ever produced in commercial operation. It’s one of the most widely used aircraft around the world. By all indications, this was an airworthy aircraft,” Dickson said on CNBC’s “Squawk Box.” “But we’ll have to go where the facts take us.”

Asked about skepticism that Chinese authorities will allow a transparent review of what happened, Dickson said, “I’m confident we’ll get to the root cause of the crash.”

China’s official Xinhua News Agency said more than 500 family members have come to the nearby city of Wuzhou while awaiting word on the 132 people who were onboard, with many of those gathered having DNA samples taken to help with the grim work of identification.

The Chinese news agency said workers were excavating a broad area as they search for evidence, including the second black box, a digital flight data recorder that would hold a detailed digital record of the plane’s movements and systems as well as the actions of its pilots. The cockpit voice recorder, which can shed light on conversations among pilots and other crew, was found this week and authorities are working to retrieve its contents.

The state-run China Daily noted that the Civil Aviation Administration of China News initially reported Friday that the flight data recorder had been discovered, but local rescue leaders “soon clarified that the second recorder had not been found.”

Under international agreements, the United States, as the country where the China Eastern plane was designed and manufactured, has been invited to join the investigation. The National Transportation Safety Board (NTSB), led by senior aviation accident investigator Sathya Silva, has assembled a team that includes technical experts from the FAA, Boeing and engine manufacturer CFM International.

But the pandemic and China’s strict controls on entering the country have slowed progress in getting the U.S. team on the ground, with negotiations on travel and logistics ongoing days after the crash.

A State Department travel advisory on China issued this month recommended that Americans reconsider travel to China “due to arbitrary enforcement of local laws and COVID-19-related travel restrictions.”

It said travelers should be ready to quarantine at a government-designated location for at least 14 days, where they may be tested daily and aren’t allowed out of their rooms. If they test positive, travelers would be required to transfer to a medical facility chosen by the government, where standards of care “may differ considerably” from those in the United States, according to the advisory.

“Travel to China is currently limited by visa and covid quarantine requirements,” the NTSB said in a statement this week. “We are working with the Department of State to address those issues with the Chinese government before any travel will be determined.”

China has dramatically improved its aviation safety record over past decades, with experts pointing to improvements across the system and a modernized fleet of airplanes, many built by Boeing and rival Airbus, as homegrown airlines cater to a growing domestic and international market.

China’s last major fatal crash was in 2010, when 44 of the 96 people onboard a Henan Airlines flight were killed when pilots missed a runway in heavy fog, according to the Aviation Safety Network, which tracks international accidents.

That years-long stretch “is impressive to me, especially since the previous decades were fraught with accidents,” said Jeff Guzzetti, a former investigator with the FAA and the NTSB.

Within China, there is intense interest in Monday’s crash, with videos circulating of the plane’s sharp descent into mountainous terrain, online photos of wreckage and rescue workers, and widespread speculation on the causes of the crash. The government’s China Daily has also sought to tamp down some of the conjecture.