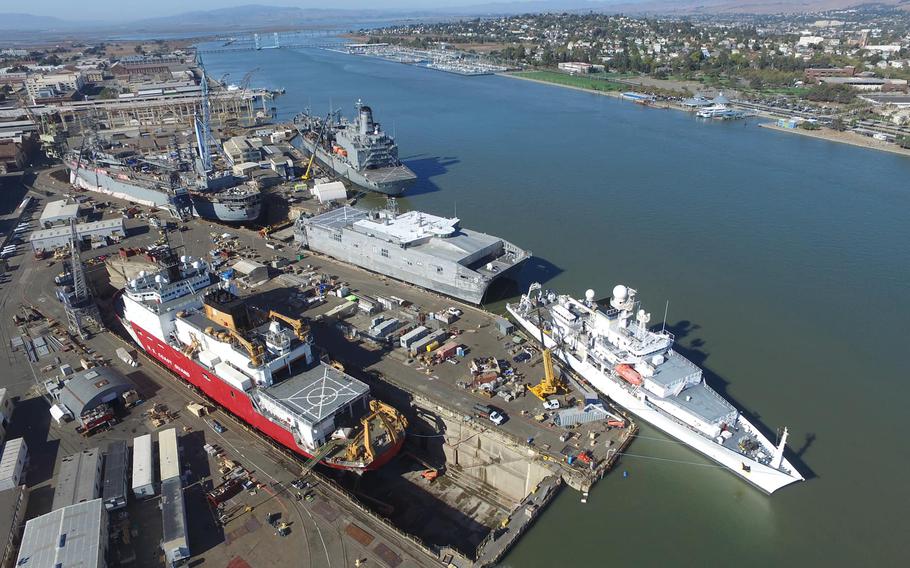 (Tribune News Service) — In the next 18 months the Mare Island dry docks are about to get a whole lot busier.

On Wednesday morning U.S. Rep. John Garamendi hosted a press conference on Mare Island in California with numerous Mare Island Dry Dock (MDD) officials to announce a $13 million investment that aims to double its workforce and help the shipyard prepare to conduct ship repairs for the United States Navy.

The funds come from private investments, according to Garamendi.

Garamendi didn't mince words when he discussed what the news meant for the area.

"As Chair of the Armed Services Subcommittee on Readiness I have direct jurisdiction over Naval ship repair issues," Garamendi said. "As a proud representative of Solano County for over 12 years, I know how critically important Mare Island can be for our military readiness as well as the local economy. I will always fight to invest in Mare Island to create new good-paying jobs throughout the community.

"Today is a historic step towards realizing that goal," Garamendi continued. "This investment is being made to help the shipyard prepare for MIL-STD-1625D dock certification so Mare Island can conduct ship repairs for the Navy. The average salary for positions at Mare Island Dry Dock is over $100,000 per year and only requires a high school diploma or relevant experience. Today symbolizes the beginning of a historic expansion of Mare Island that will bring thousands of new, good-paying jobs and a vital economic stimulus to local communities."

Garamendi said that the timeline for the issue should gradually take place over the next 18 months, but that Mare Island Dry Dock is hiring immediately.

"We're not talking minimum wage jobs here," the congressman said. "We need to reach out to the community colleges and various government training programs and make sure everything is coordinated together."

"We have about 7-8 Cal Maritime graduates working for us now and usually have two to five cadets do summer internships with us," Dunbar said.

Mare Island Dry Dock President Steve DiLeo, said the new jobs will consist of work similar to what's already being done, only that most of the work will contain facility upgrades, pumps and working on the quality of systems. DiLeo said that the building of ships could possibly be done again on Mare Island, but not in the near future as the president said the focus now is on repair capabilities.

Also discussed at the press conference was finding jobs for women and veterans.

Richard Palmer, the vice president of operations and a retired veteran, told a story about how he found his life's calling at Mare Island.

"When I retired from the military in 2014 I wasn't sure what I was going to do," Palmer said. "Once I came here to Mare Island Dry Docks I really flourished. So I know what it's like and I'll be trying bring more veterans in."

Riley, the executive director of the Napa and Solano Counties Central Labor Council, was also pleased with the announcement.

"I can't tell you how proud I am of this community today," Riley said. "When the USS Emory S. Land (AS-39) came into Vallejo last year we had a bunch of people on the waterfront welcoming it. So this community looks forward to bringing more ships in. And if you need qualified labor (looks at DiLeo, Garamendi), well, I think I can help with that."